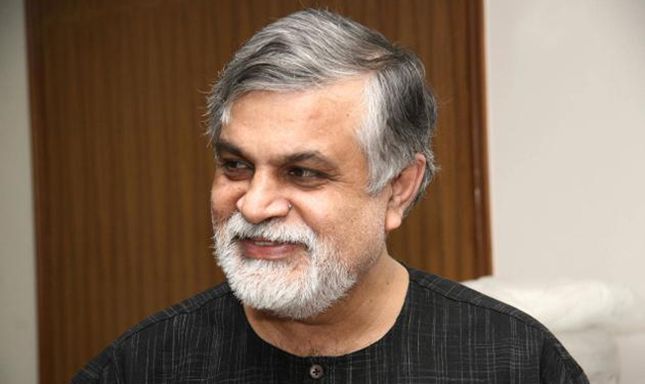 The Magic of Saida is a rich, dense novel that goes backwards in time in order to cast light on the present.  It is a frame story of love, history, culture, identity and memory.  It is memory that powers this novel, the memory of a girl left behind in East Africa by a half-African/half-Indian who is now a successful, middle-aged doctor living in Canada.  When his own marriage implodes he returns to his East African homeland to find his lost love.

Read our review of The Magic of Saida.

M.G. Vassanji was born in Kenya and raised in Tanzania. He attended MIT and the University of Pennsylvania where he specialized in theoretical nuclear physics which, of course, brings us to the really important fact that he is the author of seven novels, two collections of short stories, a travel memoir and a biography.  He is the winner of several prizes.

I think it is vital for us to share stories and in this way humanize ourselves to each other. It is also vital to tell our own stories to ourselves and thus hold up a mirror to ourselves. This is especially true of countries and cultures that were colonized in the past, and as a result received a view of the world seen from elsewhere, i.e. Europe and America. But it’s also true within a nation, for example India or the United States, where you have a so-called mainstream or elite that tells the national story and there are so many other stories that don’t receive a wider audience.

When I am asked to speak to students in Tanzania, I tell them, “Do you know how the world sees Africa? AIDS, Hunger, Wars. Is this how you want to be seen?” If we don’t tell our own stories, the world will tell our stories, and we can’t blame it then. I said the same thing to high school kids in Durban, South Africa, and they were shocked.

As Americans we’re familiar with “King Cotton’s” impact on enslaved Africans in the South (not to excuse its connection to the industrial fortunes of northern mills), but few of us know about the Maji Maji Rebellion or German colonialism in Africa. Is this knowledge part of your history in East Africa or is it something you learned about in the process of writing this novel?

This knowledge was very much a part of my growing up. In fact the Maji Maji War is a staple of the school curriculum in Tanzania. There were other wars too, for example Chief Mkwawa’s war against the Germans. When I was in school there were elders who still knew some German. And German presence in Tanzania today, though in a benign fashion, is a residue of the past relationship. What I learned later is, of course, that these historical events were complex phenomena. For example, different peoples were involved in the slave trade; Mkwawa may be a hero, but other tribes hated him. And so on, the stuff of real life.

I was reminded of DuBois’ comment about African-Americans’ “double-consciousness, this sense of always looking at one’s self through the eyes of others, of measuring one’s soul by the tape of a world that looks on in amused contempt and pity. One ever feels his two-ness,—an American, a Negro; two souls, two thoughts, two unreconciled strivings; two warring ideals in one dark body, whose dogged strength alone keeps it from being torn asunder.” Even though Kamal makes a good living in Canada, he returns to East Africa to search, in a way, for his other half. Does he succeed, do you think? Or is that up to the reader to decide?

If you mean Canadian and African (or, culturally, Indian and African), I think Kamal’s Africanness never left him. The Indianness confused him. Of course, he is also a Canadian, having made a successful life in Canada, and raised two children there. The African American has a long history in the US, I should point out, whereas Kamal is a recent arrival. He’s come away carrying a sense of guilt and betrayal that he goes back to resolve. Does he resolve it? That’s not so easy. The wound cuts deep. He finds a way—he thinks—to keep going.

For now, I would say so. One can claim mitigating factors—politics, personal situation, etc. Is that enough? It has to be, but that’s not enough to heal oneself completely.

Both Kamal and Saida are father-less. How does the loss or lack of a father influence these characters’ actions? Would a father’s presence have eased or exacerbated their circumstances?

In Kamal’s case, it would have made a big difference, because he (and his mother) always felt they had been abandoned. Kamal’s father would also have answered questions that plagued the boy as to who exactly he was.

Saida was influenced and raised by women and I don’t see her father making much difference. She was raised to become a good Swahili wife.

Why are the faithless sometimes the bravest?

Only when they confront themselves.

Karen DeWitt was
a journalist for many years and for the last decade has been a senior
communications professional for nonprofit organizations. DeWitt covered the
White House and national politics for The
New York Times; foreign affairs
and the White House for USA TODAY
and was a senior producer for ABC’s Nightline.

In these snapshots, you’ll find sexual exploitation; a downbeat novel about youthful frustration, disappointment and mistakes of the past; and a dark and stormy night when uninvited guests challenge propriety and expectations.