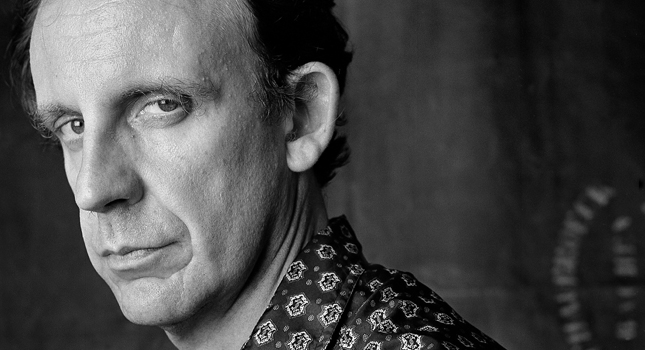 Madison Smartt Bell, who has been a finalist for the National Book Award, has been known to take out a percussion instrument from Haiti and sing a native song at the end of a public reading. Though deeply immersed in the culture of that troubled country, Smartt was born near Nashville and has lived much of his life in Baltimore. Tennessee comes out in his voice, Baltimore in his body language — the first in a droll, lilting tone, the other in wary, slow and steady movements, along with slightly droopy eyes that still give the impression they don’t miss much.

Perhaps best known for his “Haitian Trilogy” — All Souls Rising (1995), Master of the Crossroads (2000) and The Stone That the Builder Refused (2004) — Smartt is also an accomplished short-story writer and guitarist, and a pretty nice guy to be around.

Music and musicians figure prominently in much of his work; both have been a major influence on his subjects and literary approach. As he puts it: “Some writers compose for the eye, but I write first for the ear.” Special mention should probably be made of his devotion to Captain Beefheart, of which you’ll read more below.

His most recent collection of stories, Zig Zag (2013), Smartt explains, is part of an interesting publishing venture with Concord Free Press.

This Concord Press idea is pretty exciting. What’s your hope for it, and how your collection might contribute?

Concord Free Press has established itself pretty well over the last few years, against monumental odds. Their M.O. is to exchange a book for a promise from the recipient to do some charitable action, the scale of which can range from giving a quarter to somebody on the street to giving a quarter million dollars to the Lambi Fund for Haiti [which supports projects of native -led community organizations]. They record gifts , and the results have been impressive. Otherwise, they obviously don’t make money. My understanding is that they run on a shoestring braided of a little grant money and a lot of volunteer time. Stona Fitch, the mastermind behind it, has a bit of socially progressive anarchist in him, I think, or he’d never have thought of it, much less been able to make it work.

And it’s a relationship of mutual benefit, because in the present climate I could have waited a long time to get a book of stories out with a conventional publisher. They’re just generally in too much trouble already, long story short. Publishing is in the middle of a paradigm shift, and digital possibilities will be liberating in the long run, I think.  Right now it’s confusing and kind of scary. Good time for me to try something different.

From the first page of your first novel, The Washington Square Ensemble (1983), to your Haitian trilogy, and sprinkled throughout many of your short stories and other works, Haiti figures prominently in your writing. What does Haiti represent to you as a writer?

Hah, well, you made me dust off a copy of WSE, but I don’t find a mention of Haiti on page 1.  There’s Santeria, rather than Haitian Vodou, in that book. But in 1980 when I was writing it there was not a lot written about Santeria, so I carried over some research that was easier to do on Haitian Vodou. The two religions have similar origins but are not the same thing. Vodou contributes to Haiti being a place where magical thinking actually works, a situation that enchants me. In a way, that says it all. But Haiti is also the crossroads where Europeans, Amerindians and Africans came together for the first time, which means the richness of its culture in forming the world we live in now is absolutely bottomless.

Here’s the sentence that caught my eye: “And maybe it’s a big kick for her, but I think it’s a lousy reason to die, poor Eva the Swede, I get so tired wondering whether it will be the Rastas who claim her flaxen head for a soccer ball or the Haitians who will shrink it down to one-quarter size to add to their voodoo relic.” It sounds like what I took to be Haitian is not the “same” Haitian as is represented in the trilogy?

Ah, well, that’s the character riffing. And remember, the character is basically a Mafia thug, albeit with quick wits, a quick tongue and a taste for esoteric jazz. At that time, 1981-82, I knew practically nothing about Haiti or Haitians and was just beginning to do a little reading about Vodou.

I’m more of a Beatles/Kinks man myself. What’s so wonderful about Captain Beefheart?  I loved the way you wove his music almost as a character in “Petrified Forest” [a short story in the new collection]. I didn’t know the music at all, yet it still came alive in the story.

The jazz heads I knew in college liked Captain B. I listened then for what you might call social reasons ——I was interested but not really hearing it,you might say. Then around 1991 all the previously unfindable stuff came out on CD, and I got Holy Grail material like Trout Mask Replica and all of a sudden I started to really hear the beauty in the sound. It is kind of a challenge to pick that out of near discord and constantly shifting tempos. I had gone back to playing guitar around the same time and had some facility picking up blues-rock standards and was puzzled by the difficulty of picking out Captain B songs. It forced me to recognize how complex this music really is. There’s a great documentary by John Peel you can find on YouTube where Matt Groening, of all people, is very articulate about it. There’s three or four elements that wouldn’t ordinarily be combined. He’s influenced — you really hear this in the horn parts he plays himself — by “harmelodics” à la Ornette Coleman. He has a very jumpy attitude to time signature. As somebody (not Groening, I think) says in the Peel doc, he’s not comfortable sitting on a 4 for more than a couple of bars. With these ingredients, he’s constructed an alternative musical world than runs very much on its own weird rules. Once I found a way into it I was happy to stay there quite a while.

Why do so many writers also plunk around on guitars? You, Richard Bausch, Rock Bottom Remainder folks, many others.

I’ll speak for myself, though I enjoy playing with Dick Bausch when we get a chance. Rock Bottom Remainders strike me as a celebrity/novelty act, though I’ve been told they can also actually play. Haven’t heard them myself.

I grew up in the Nashville area, so playing fretted instruments is almost as inevitable as riding a bicycle. My father was a solid amateur musician with a much better singing voice than mine. I started learning on his instruments, though never learned all the ones he could play.

Some writers compose first for the eye, but I write first for the ear. I’m very aware of the sound quality of prose. And all my adventures in music — playing and listening — are intertwined with that.

Turning to your writing approach, do you think characters have to be likable, or is it enough to create the kind of characters that people are interested in? What writers do you admire here?

What’s likable?  I mean, if you get a reader interested in a character, some attraction, however reluctant, goes with that. The most extremely unsympathetic character in my own work is probably Mae, heroine and narrator of The Color of Night (2011), a totally murderous person. I wouldn’t say she’s likable in the least, but to write her I had to love her a little. My agent said looking at her was like watching a cat kill mice. You don’t blame the cat, who’s only enacting its nature, and in fact you sorta have to admire how good the cat is at doing that.

How does your approach differ when you are writing a short story versus a novel, for example, in regard to things like outlining and backstory?

You can write a short story in a burst of inspiration, which is a way fun way to do it. Most of my stories are written like that. I plan them, but the planning is unconscious for the most part. I toy with the story idea mentally until intuition tells me I can get it in one or two sittings.

Novels require a somewhat more definite plan if you don’t want to have to write the whole thing more than once, and I’m too lazy to want do that! Here the trick is to avoid overdetermining the book by advance planning. My first effort to write a novel failed because of advance overdetermination. My second try (Washington Square Ensemble) I overcompensated and did no planning at all, but the book did have a sort of structural logic as a cycle of monologues, and in spite of its considerable disorderliness I was able to publish it anyway. That was in 1983 — it wouldn’t happen now.

After that I got a more durable system which works kind of like this:

Then write the beginning, an act which launches an arrow into the darkness between the beginning and the end.

Then, as I write, I mentally subdivide the space between beginning into parts or movements, and I sketch a little in the different parts as I keep moving forward from the beginning. The idea of parts with a rough notion of their content allows me to track where my arrow’s at, but without losing the sense of discovery one needs to keep up one’s own interest in writing the book.

Michael Causey is a
past president of Washington Independent Writers.

An Interview with Monica Bhide

A popular foodie writer sets her sights on fiction.