The first of a trilogy, Jonathan Holt's The Abomination is a riveting, well-written conspiracy thriller. 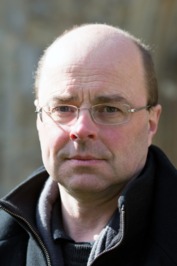 Three unlikely heroes work the tides and alleyways of Venice to understand the mystery that binds together virtual reality, sex trafficking, political corruption, the Catholic Church’s “abomination” of women priests, the Mafia, the Bosnian war and some unsavory truths about U.S. foreign policy.

The Q&A with Jonathan Holt

Carabiniere Captain Kat Tapo’s attraction to Aldo Piola is understandable — he’s incorruptible, professional — but as ambitious as she is and as conscientious as he, would they succumb to a fleeting sexual fling? What prompted you to have Tapo accuse her former lover of sexual harassment given that she is as culpable as he is?

The accusation is of sexual misconduct — her complaint isn’t that he slept with a junior officer, it’s that he tried to have her moved off the case afterwards. It’s a little high-minded of her, certainly — but I think you have to see it in the context of everything she’s just learned about the treatment of women in the Catholic Church and the rape camps of Bosnia. And I certainly don’t think she’s necessarily thought through the implications of her accusation — the fallout from which will reverberate through Book Two of the trilogy, The Abduction.

Aldo Piola is so incorruptible that his fall and subsequent atonement seem at odds with his initial character description. Did you give him this fatal (sexual) flaw as part of the overall structure of the book?

Yes, but I don’t see his vices and his virtues as incompatible: like many highly principled men, he has a romantic ideal of himself as a hero, a man of integrity, and that means he’s also partial to being hero-worshipped by an attractive junior.

You have multiple plot strands in your debut novel, based in reality. How long did it take you to work out those plotlines and did you do it before or during the writing?

Years! Or at least around 18 months. And I plotted not only Book One, but also the next two books in the trilogy. The plots are there, but the detail and the research gets fleshed out as I go along.

Danielle Barbo is a fascinating character. Is he autistic or merely scarred? Imagination is endless, but is Barbo’s kidnapping and disfiguration based on John Paul Getty III and Aldo Moro?

Yes, there’s definitely an element of John Paul Getty III in the way that his kidnappers cut off his nose and ears to force his parents to pay up. The real John Paul Getty turned to drugs: Daniele Barbo turns to computers. Whether he’s genuinely, incurably autistic or simply scarred by his ordeal — and therefore can be cured — is a puzzle that will take us right through to Book Three.

Barbo’s virtual reality website, hacking and the tracking by sophisticated “drones” is technologically sound. How much research went into the cyber aspects of the novel?

All the cyber aspects are true — in other words, I’ve set myself a rule that nothing in that area is made up: I’ve simply combined many new technologies into one fictional website, when in reality they exist across many different websites. But it feels to me that any story written today which doesn’t involve the Internet and social media in some way is already out of date.

I enjoyed the character of Holly — her all-American enthusiasm and naiveté about the world that is still true today, despite the Internet, 24/7 news, and Americans’ global gap year and study and travel abroad. Still, she’s no wimp. Will she lose even more of her American innocence about the integrity of her government in future books?

Well, the trilogy is mainly about three character arcs — Kat’s ambition, Daniele’s autistic tendencies and Holly’s loyalty to her country. For all three, there will be a big test before the story ends. Let’s just say her relationship with her government is something that Holly will be forced to make a massive choice about at a key moment.

Do you think that being the creative director of an advertising agency helped in the conceptualization of this novel? If so, how? What is your writing regimen?

They’re very different careers — I’m enjoying writing a big, sweeping, dark thriller series precisely because it’s so different from my day job, which is all about short, focused selling messages that focus on the positive. But one thing that does link them is that in both roles I think a lot about what the audience wants. I want to write fast-moving books that millions of people will be entertained by, not literary works that will only be appreciated by a few.

This is your debut novel, but not your first book. Any chance follies will feature in a future thriller?

I’m not quite sure what you mean by follies, but the same group of core characters will turn up in Books Two and Three of the Carnivia trilogy. And there will certainly be more thrillers after that. Whether there will be a second Carnivia trilogy, I’m not certain yet — it depends whether the characters’ stories are completely resolved by the end of this one.

Karen DeWitt was a journalist for many years and for the last decade has been a senior communications professional for nonprofit organizations. DeWitt covered the White House and national politics for The New York Times, foreign affairs and the White House for USA TODAY, and was a senior producer for ABC’s Nightline.