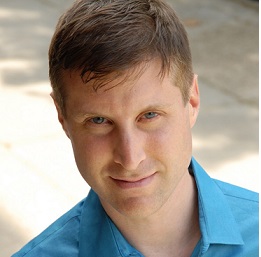 Matthew Kressel’s debut novel, King of Shards (the start of the “Worldmender” trilogy, loosely based on Jewish mythology), arrived last year. The story features alternate dimensions full of an invented cosmology that includes nods to classic “portal” fantasies like C.S. Lewis’ Narnia series and more grown-up series like Lev Grossman’s Magician (or Fillory) books. King of Shards starts out in contemporary New York City before moving to the demon-haunted realm of the Shattered Vessels (imperfect worlds made by God before he created Earth). The novel is soaked in magic and is full of action, but has depth due to the Kressel’s vast knowledge of Jewish folklore. Kressel has published many short stories (including two Nebula Award finalists) and was founder/editor of the influential zine Sybil’s Garage.

Portal fantasy seems to be making a resurgence — see Lev Grossman’s The Magicians series. What is their appeal?

I think they're fantastic. I love The Magicians, and I'm really enjoying the SyFy adaptation. In portal fantasies, the protagonist discovers (or is thrust into) a secondary world adjacent to or overlapping ours. Like Oz and Narnia, these worlds can be beautiful and terrifying, life-threatening and life-affirming. But primarily the reader discovers along with the protagonist that their world is much larger than they had conceived, and they have much more power to shape events. This closely mirrors the path to adulthood and is why portal quests are often Bildungsroman coming-of-age tales. As children, we have little power and our world is small. But as we grow, so does our universe and our power to shape events. But at some point, this power stops growing, usually before we wish it to. We run up against the world's limitations. So the appeal to readers, I think, is this loosening of limitations — finding the world larger and more wondrous than we'd imagined — and the pleasure of watching how characters behave when faced with these new realities.

King of Shards uses Jewish mythology as the touchstone for its relatively secular world-building. What were the challenges of adapting religious beliefs for a fantasy series?

I also needed to ask serious questions about belief in redemption and how such beliefs enable us to tolerate vast amounts of suffering — our own, and in others. But at its heart, King of Shards is a fantasy tale and uses the tropes of genre fiction to convey its narrative. As much as possible, I tried to use existing Judaic myths, but in other places, I created my own, following the long line of folk traditions. And thus I built an immersive world. So while King of Shards is based on Jewish mythology, it is not limited by it. In fact, the second book broadens the scope into other traditions, most notably Buddhism, among others.

King of Shards is a part of the mini Jewish renaissance of fantasy fiction — I’ve tweeted about it before (The Angel of Losses, The Golem and the Jinni, The Flame Alphabet). The works all seem to be “in conversation” with each other. Where do you think this renewed interested in Judaica comes from?

I'm not sure. From a certain standpoint, Jewish fantasy fiction has been around for a long time. There's Lisa Goldstein's The Red Magician, Jane Yolen's The Devil's Arithmetic, Jack Dann's fabulous anthology of Jewish science fiction and fantasy, Wandering Stars, and, of course, Isaac Bashevis Singer was doing Jewish fantasy before it was called that, in Yiddish no less, and won the Nobel Prize for it. But I have noticed over the last decade and a half a broadening of the types of fiction in genre circles, as there's been a very conscious attempt to bring in stories from non-Western cultures and mythologies and previously marginalized groups like persons of color, women, LGBTQ persons, etc. So there's been an influx of new mythologies and points of view. The renewed interest in Jewish fantasy may play into that. Also the mythology of Judaism just hasn't been mined in fiction the way Christian myths have, and so it comes across as fresh and exciting to many Western readers.

Is there talk of Sybil’s Garage — the indie zine you published back in the early aughts — making a comeback? What did you learn from that experience?

I would love to bring Sybil's Garage back, perhaps as an online magazine, but, alas, I just don't currently have the time. This is not to say it won't come back down the line. I've often talked about editing again, perhaps co-editing a science-fiction anthology with writer Mercurio D. Rivera, which will likely happen before a Sybil's Garage reboot, but who knows? I think every aspiring writer should read slush at one point in her life. You quickly see what editors want, how you must hold their interest at all times. No slow intros, no long interludes, no clunky prose. It's made my writing better. It was also a great chance to meet so many artists, online at first when we bought their stories and poems, and later at cons and events. It was in a way my introduction to the wider genre community, and it opened many doors for me. I have so many fond memories of those days, and it would be wonderful at some point to revisit the zine.

Can you tell us about the other books in the series? Give us a spoiler-free synopsis!

Queen of Static, the second book in the Worldmender trilogy, begins a few weeks after the first book. Several characters reappear, many new ones are introduced, but I think the most significant difference between the books is the scope. Whereas the characters in King of Shards spend the bulk of their time crossing the desert Shard of Gehinnom, in Queen of Static, we see much more of Sheol and its kingdom of demons, their plays for power, its social hierarchies. Even in hell, there are social classes, and those at the bottom live miserable lives, while those at the top live in relative luxury. We also see more of Earth, what's happened since the climax of the first book, how things are changing. (For the worse? Perhaps.) The second book also delves into Eastern mythologies like Hinduism and Buddhism, and how Jewish stories might be filtered through the lenses of other faiths. There are Muslim, Buddhist, Hindu, and Christian main characters, as well as Jewish ones. It's also a book about narcissism. Ultimately, Queen of Static is a sprawling, complex fantasy novel that I hope readers can get lost in.

Craig Laurance Gidney writes both contemporary young-adult and genre fiction. Gidney’s first collection, Sea, Swallow Me and Other Stories, was a finalist for the 2009 Lambda Literary Award in the Science Fiction/Fantasy and Horror category. Bereft (Tiny Satchel Press), a YA novel, appeared in 2013. Skin Deep Magic (Rebel Satori Press) is his third book. Gidney lives and writes in his native Washington, DC.

In Daughters of the Samurai, the author resurrects the remarkable, long-buried story of three Japanese girls sent to America in the 1870s.