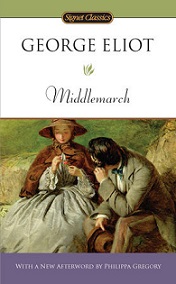 In Middlemarch, Reverend Edward Casaubon is working on a grand theory. His theological research, Key to All Mythologies, aims to catalog the world’s legends. This sum of all mythology, he believes, will be a universal revelation.

It’s a tall order. As the years tick by, the mythologies Casaubon studies prove as boundless as the truth he thinks they will illuminate.

Casaubon’s personal failings also come into the mix: He lacks the requisite imagination and passion for the study of myths. Besides, as his cousin Will Ladislaw points out, most of the theological research in Casaubon’s field is written in German — a language Casaubon doesn’t understand. Entombed in his dusty library, Casaubon attempts to reinvent the spiritual wheel. It’s an undertaking beyond his abilities.

I know how he feels. It’s intimidating to read and write about Middlemarch, the story in which Casaubon appears. After all, it’s the 19th-century epic that’s been called “the best novel in the English language.” The book chimes in at almost 650 pages, and in them, author George Eliot (Mary Ann Evans) gives us a tome about the intersectant lives of people — so many people — and once everyone and everything is accounted for, the work amounts to something of a grand framework in itself.

Using the concept of Key to All Mythologies as a touchstone, Eliot has a little intertextual fun. Casaubon is called a Minotaur; his younger wife and hero of the story, Dorothea Brookes, is associated with Persephone, Antigone, and St. Theresa. In an amusing scene, Will, who is in love with Dorothea, refers to her marriage as a virgin sacrifice. Fragments of poems and mythology mark the beginning of chapters, daring us to interpret meanings so that we might, like Casaubon, strain our eyes looking for the universal key.

The literary record tells us Eliot was urged by one of her contemporaries to write a novel illustrating August Comte’s positivist philosophy (speaking of universal keys). Comte’s theory of sociology advanced our thought on social systems by theorizing they could be classified and studied as natural sciences. In Middlemarch, his influence is felt in Casaubon’s painstaking rigor, as well as with Dr. Lydgate, who wants to revolutionize the field of medicine by discovering his own key, what he calls “primitive tissue,” which he believes to be the building block of life.

The novel, written and serialized between 1869-1871, dates well before the advent of Excel spreadsheets. Yet one can imagine Eliot plugging and plotting away until her variables were balanced and her social-science ecosystem complete: The narrator will represent knowledge here; Mr. Brooke and his ill-fated reform campaign will be the political there; Will Ladislaw, as writer and editor and consummate outsider, will stand in for the arts; Camden Farebrother, religion; and so on.

As for the institution of marriage, Middlemarch offers at least three in-depth case studies of dignified Victorian suffering. (None is more affecting than the episode where Harriet Bulstrode, once highly esteemed, puts on her mourning garb and joins her husband as a social outcast.)

Surprisingly, though, Eliot wasn’t an empiricist. She took up the challenge to render Comte’s sociological vision, but she also writes in a way that urges readers far beyond it.

Consider these hints: No one in the book respects Casaubon. And he knows it, or at least he has a gnawing hunch. Locked away by his insecurities, he can’t write one word of the Key, and instead produces “pamphlets” on his research, which go, he suspects, unread. Likewise, Casaubon’s scientific analog, Dr. Lydgate, ends up treating gout instead of making exciting new discoveries in medicine.

Within the fictional universe of Middlemarch, Eliot disciplines abstract vision by dashing the offenders against the solid ground they avoid. They endure gossip, shunning, and illness. Some can survive the shock; others cannot.

Of course, in the absence of a system’s reading, the story makes for a clear and urgent symphony of its own. None of the characters, however, manage to sidestep the shadow cast by “the key,” and they spend their time searching for what might unlock the barriers to their spiritual and material wholeness.

The idealistic Dorothea, who becomes Casaubon’s young bride, thinks devotion will get her there. She pledges herself, unhappily, to helping Casaubon with his fallow research, even though he resists her support. Rosamond Vincy, spoiled daughter of the town mayor, dreams of being an aristocrat and tries to achieve that aim by using charm and her most defining feature: a curiously placid willpower. Her brother, Fred, loves a girl named Mary Garth, who won’t have him unless he amends his errant ways and finds an honest calling.

The characters cope with money problems, marital discord, frustrated ambitions, threats to their honor, and unrequited love. And, in the private canals of their own thoughts, they wrestle with their consciences. It’s for this reason, I think, that Middlemarch is hailed as one of the great literary achievements. Not because it takes on the moral inner worlds of its characters (most decent novels do), but because it does so with such fine attunement to psychology and a profound, almost alarming sense of understanding.

It's challenging to the social order (Middlemarch’s and ours) when Eliot presses us to the wrongdoing of a character whom we feel sorry for. Like Nicholas Bulstrode, the town philanthropist and devout Christian, who made his fortune by secretive means. Consider this agonizing passage where he realizes his illicit history is about to be exposed:

“…a man’s past is not simply a dead history, an outworn preparation of the present: it is not a repented error shaken loose from the life: it is a still quivering part of himself, bringing shudders and bitter flavors and tinglings of a merited shame…Night and day, without interruption save of brief sleep which only wove retrospective and fear into a fantastic present, he felt scenes of his earlier life coming between him and everything else…”

Bulstrode’s former vocation as a stolen-goods merchant and fortune-hunter is neither dead nor forgiven. And it can’t be forgotten either, because it’s a living part of him, possessing his consciousness. Eliot coaxes readers to a compassionate view of Bulstrode (his “shudders” and “bitter flavors”) using the inside track of his terror. Later, she goes further into his backstory —his lonely childhood as an orphan; his destitute, limited prospects.

As such, Bulstrode’s downfall is excruciating to experience. The situation becomes more complex when his negligence leads to the death of Mr. Raffles, who has blackmailed him. That Bulstrode is guilty of something is clear; what’s not clear is the extent and depth of his guilt, moral and legal, even as we the readers are in his mind the entire time, being guided by one of literature’s most omniscient and trustworthy narrators. Which might signal something remarkable: The all-knowing view isn’t a qualified judge. Here, Eliot’s subtlety regarding Bulstrode’s motives is dangerous; it’s also potentially transformative.

Can such sensitive understandings be rallied beyond the confines of a book? It’s hard to say. And whether this radical sympathy would lead to a malignant nihilism where “everything is permitted” or could become a key to psychological elevation? Only we can decide.

Dorothy Reno’s long essay on the works of Viet Thanh Nguyen, “Lonely Ghosts: Absence as Somethingness in the Works of Viet Thanh Nguyen,” was published last September by the Hong Kong Review. She is also the co-creator of a visual companion piece for that essay, “Lonely Ghosts: Absence and Somethingness.” You can join her in reading Things Fall Apart, which will be the subject of her next column on June 27th, 2022.