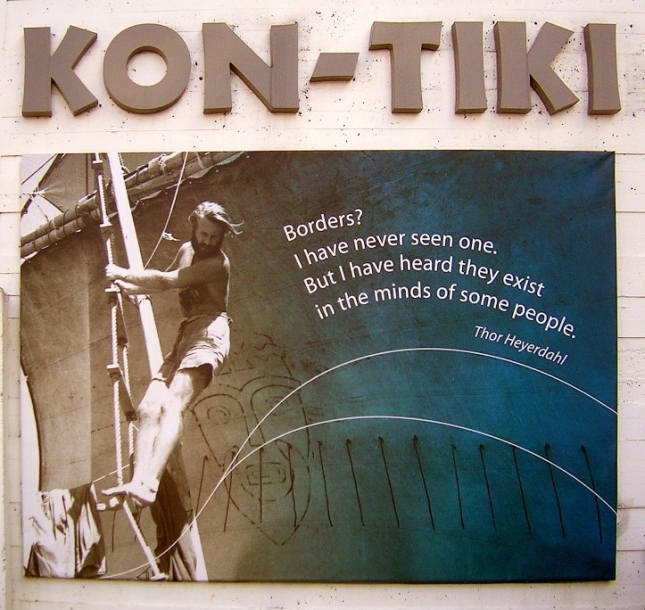 Thor Heyerdahl’s classic pays homage to the explorer in us all.

“Kon-Tiki” is a great antidote to “Iron Man 3.” The 2012 film version of Thor Heyerdahl’s classic account of crossing the Pacific in a balsa raft is a real adventure.

Heyerdahl’s adventure, by contrast, first related in his bestselling 1948 book, consists of six very ordinary men who, without any nautical experience or other special skills, set out to prove that Polynesia could have been settled by South American natives who let the current carry their primitive rafts 5,000 miles over the ocean.

The 2012 film, from Heyerdahl’s native Norway, depicts these flawed individuals with very little sugar-coating. Their adventure is having the vision to undertake the voyage and then actually doing it. Listless days with no wind and a current carrying them away from their destination are as much a part of the adventure as a flurry of action fending off an aggressive shark.

The book captivated me when I read it in high school. The exotic locales, the daredevil bravery, the very escapism of it all held much appeal for a boy in Kansas. Heyerdahl was Huck Finn writ large (Twain’s book, remember, was titled Adventures of Huckleberry Finn) and with Viking genes.

When I visited Oslo many years later, I stood in respectful silence before the original Kon-Tiki raft displayed there. On a transatlantic flight this summer, it was an easy choice to skip the cartoon antics of the latest Iron Man sequel and view Pål Sverre Hagen’s portrayal of the Norwegian adventurer instead.

The Kon-Tiki voyage, as the film relates, broke up Heyerdahl’s first marriage. Later adventures—to Easter Island to explain those mysterious statues (recounted in his book Aku Aku); crossing the Atlantic in a primitive papyrus boat (the second attempt succeeded in sailing from Morocco to Barbados); and an attempt to link Mesopotamia to the Indus by sailing across the Persian Gulf (aborted for political reasons)—all took their toll on his personal life. But he died at age 87 surrounded by family, survived by his third wife.

Real adventure—striking out into the unknown—is rare in our densely populated, wired world. The success of Indiana Jones is due, in part, to nostalgia for a period when there were still remote or unexplored regions for adventuring. But the Harrison Ford movies are all about action; adventure is more a state of mind.

As Heyerdahl relates in the opening pages of Kon-Tiki: “If I turned left, I had an unimpeded view of a vast blue sea with hissing waves, rolling by close at hand in an endless pursuit of an ever retreating horizon. If I turned right, I saw the inside of a shadowy cabin in which a bearded individual was lying on his back reading Goethe with his bare toes carefully dug into the latticework in the low bamboo roof of the crazy little cabin that was our common home.”

Darrell Delamaide is a writer in Washington, DC. His novel, The Grand Mirage, is an adventure in espionage set in 1910.