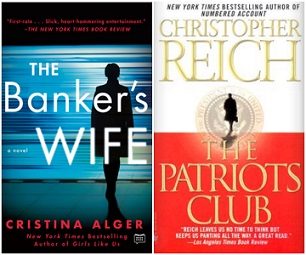 I’m a fan of financial thrillers, though I’ve read few lately and am not sure whether there are fewer good ones, or I’ve just lost interest. Maybe it’s because I’ve been a financial journalist all my career and still follow many of the real-life shenanigans in finance.

Sometimes, I think the genre faded in the wake of the 2008 financial crisis brought on by rampant fraud in subprime mortgages, spectacularly wrong bets in complex financing strategies, and outright deception in everything from rate-fixing to money laundering.

Who can make up stuff better than that? The bestsellers — and the movies based on them — now are nonfiction works like Andrew Ross Sorkin’s Too Big to Fail and Michael Lewis’ The Big Short.

One recent novel stands out, however. Cristina Alger’s 2018 The Banker’s Wife takes us to the source of many dirty-money tricks — Switzerland — where a fictional Swiss United Bank (SUB instead of the real-life UBS) appears to be in the thick of an international money-laundering/influence-peddling conspiracy.

Finance is, of course, merely the setting for a financial thriller. The drama and suspense come from murder, betrayal, deception, and all the other expected juicy ingredients. This is certainly true of Alger’s book, which features not one, but two sympathetic female protagonists. Annabel is the wife of a banker who disappears when his plane crashes in the Alps, and her research into his life uncovers some disturbing clues about the bank. The other protagonist is Marina, an ambitious journalist who has become engaged to the son of a potential U.S. presidential candidate but who must confront the truth she learns about his family.

The details of financial crimes ring true (enough), and Alger, a lawyer who once worked at Goldman Sachs, is an accomplished writer. Her 2012 debut, The Darlings, reflects the Wall Street world she worked in. Her 2019 Girls Like Us is more of a police procedural, although it, too, features a sympathetic female protagonist in FBI agent Nell Flynn.

Two classic financial thriller writers, Michael Ridpath and Christopher Reich, have mostly moved on to other things. Ridpath, a Brit who worked as a fund manager in London, debuted with Free to Trade in 1995, featuring an Olympic runner turned commodities trader. He wrote half a dozen standalone financial thrillers and then two novels in a series featuring Alex Calder, a former RAF pilot turned bond trader. But now he is focused on more traditional thrillers and a detective series with Icelandic-American hero Magnus Ragnarsson (and he is still a very good writer!).

Reich debuted in 1999 with Numbered Account, this one set in Zurich at a fictional United Swiss Bank (USB instead of UBS — you begin to see the pattern here), where a Wall Streeter goes to work to investigate his father’s death. By the time he gets to The Patriots Club in 2006, Reich, who worked at a Swiss bank, is more into a traditional political thriller, though the protagonist is still a Wall Street star. His recent novels feature “international spy” Simon Riske.

Stephen Frey has written nearly two dozen thrillers, most of them “set in the world of finance,” starting with The Takeover in 1995. They often involve fiscal skullduggery along with murder, mayhem, and conspiracy. Frey has worked for 25 years in private equity and investment banking, and he truly knows what he’s talking about.

Still, the granddaddy of all financial-thriller writers is Paul Erdman. His 1976 book, The Crash of ’79, following The Billion Dollar Sure Thing and The Silver Bears, virtually created the genre. The titular economic crash involved the Shah of Iran (remember him?), and the book’s first page, ostensibly written by a survivalist in California in 1984, contains the immortal line: “I liked the old days when we still had airplanes and television and dry martinis and pornography.”

Erdman, who worked at a Swiss bank and spent some time in a Swiss jail, is particularly hard on the Swiss in this book and subsequent novels, injecting Switzerland into the DNA of the financial-thriller genre.

Though his seminal work was updated to The Crash of ’81 when it appeared in translation, it and other classics are relatively timeless, even if their details have been overtaken by real events. The genre may have fallen somewhat out of fashion, but the suspense still binds, the thrill is still there.