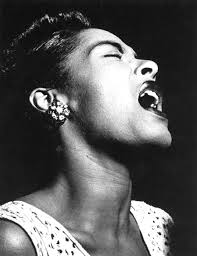 Lately my iPod has been happily stuck on L’Orange, a brilliant producer heavily influenced by old movies, hip hop, and Billie Holiday. Listening to his work has sent me digging into my record crates (actually, just scanning my iPad) for Holiday’s music. More than that, L’Orange and Billie Holiday have plunged me into memories of my first book: how writing it took me into despair, how Holiday’s music helped pull me out.

I began to take my writing seriously when I graduated college in 1997 (I’m very old). I’d studied literature, so I had an idea of what strong writing was, and I knew I wasn’t there yet. But I was learning, and I wasn’t rushed, and I didn’t care about publishing, and that’s a wonderful feeling.

A novel slowly emerged out of the short stories I was working on, the kind of stories that are common in writing classes: maybe promising, but technically limited and emotionally stunted.

It was around that time I started listening to jazz. That sounds easier than what actually happened. Jazz devoured me. I fell in love with everything about the music: the midnight quality to the songs, the resilient triumph in the bluesy notes, the masterful improvisation, and I’m still a fan to this day. For me, and I realize this is entirely subjective, no other genre of music is more powerful.

I was going through some shit back then and, because I was a novice, my emotions bled all over the page. First novels are like first loves: excitingly overwhelming, obsessive, pained. And like a first love, there’s an honesty in your emotions that will eventually be ruined, an honesty that — among the terrible drafts and embarrassing false starts — you’ll realize is pure.

And this honesty has to be present in whatever you write. Or else you’re writing garbage.

But honesty comes at a price, and when you’re writing and rewriting about pain, the price is the deepening of that pain. There’s a strong chance you’ll be overwhelmed; the depression is lovely and inspiring until it’s real. It’s then that you have to learn on the job how to stay afloat.

I didn’t understand that, and so I sank deeper. I stayed in that state, slogging through days, and that’s when I first heard Billie Holiday’s broken voice.

You’re stuck once Holiday gets her hooks in you. Her music is a relentless mix of beauty and pain, like the best art, like the worst love. I’ve never come across another artist who conveyed the type of honest and terrible anguish Holiday did (maybe Bessie Smith). Art is an interpretation of emotion, but there’s no interpretation in her voice. She speaks the language fluently.

I did recover, and learn, and Billie Holiday’s music didn’t save my life or anything that dramatic, but she was a torch in the darkness. More than that, her music informed my first novel and steered its development. I knew how the book should end, but didn’t know how to take it there.

The answer was in her music, in the rise and fall of her verses, in the pattern of a song…in the realization that an ending can be heartbreakingly imperfect for your characters, but still complete.

That novel was never published. It’s spent the past decade close to me, a memory that sometimes whispers, sometimes pulls, but doesn’t leave. That book never will leave me, and it serves as a constant reminder to keep the honesty, however painful, in whatever I write.

V-Day is right around the corner, so let’s get to the letters.

Thoughts on NWA at the LOC