Have Books, Will Travel

The stories on my shelf take me back to Sweden. 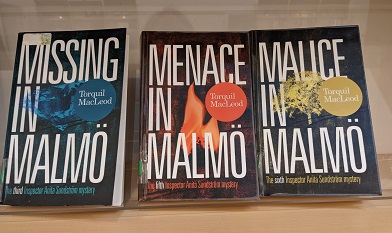 Since my daughter moved to Malmö on Election Day 2020, in the height of the pandemic, I’ve been reading Swedish literature in translation. My husband and I couldn’t visit for a year, but reading books set in a destination is my favorite way to prepare for travel — and to extend a trip after returning home.

Two years ago, I’d only read two Swedish authors, Astrid Lindgren and Dag Hammarskjöld. Pippi Longstocking and Markings are still on my shelves, a strange combination of light and dark — just like Sweden’s bright summer days and long winter nights.

I did try to reread Markings, but it was such a dark time. I couldn’t. So, Lindgren, I thought, and soon found A World Gone Mad: The Diaries of Astrid Lindgren 1939-45. Diaries are a portal to the past. Hers provide backstory for Pippi’s creator, and her account of the war years in Sweden introduced me to the ambiguities and lingering shadows of that country’s neutrality, actions, and inactions.

Not long after reading the diaries, I had tea with my friend Sophie Cook surrounded by mementos of her childhood in Hungary, where, during World War II, she lived before hiding in Switzerland and Paris before finally coming to New York with her brother and parents to rejoin her surviving aunts. Sophie’s an expert on the Swedish author Selma Lagerlöf, winner of the 1909 Nobel Prize for Literature, the first woman to receive the honor. (In fact, Sophie’s written a novel based on Selma’s life which I hope will soon be between covers.)

What Swedish books should I read? I asked. Where should I start?

She suggested The Saga of Gösta Berling, Lagerlöf’s first published novel (1891), a tragic tale of a defrocked, alcoholic priest. The 1924 silent-movie version launched Greta Garbo’s career. My daughter and I read it together (though apart) over the long, dark winter of 2020, a transatlantic book club of two. There’s snow, sleigh rides, and ravening wolves. We followed up with Sophie’s favorite Lagerlöf, The Emperor of Portugalia — a story of loving too much, of madness, and (as Sophie stresses) of forgiveness.

After Lagerlöf, I happened upon a delightful contemporary Norwegian novel, Long Live the Post Horn! by Vigdis Hjorth (reminiscent of the recent Japanese novel Strange Weather in Tokyo by Hiromi Kawakami). I then reviewed a couple other Norwegian books: the debut novel Lean Your Loneliness Slowly Against Mine by Klara Hveberg and the story collection Wild Swims by Dorothe Nors.

But was I avoiding the obvious: Nordic noir?

Full disclosure: As a kid, I couldn’t read Nancy Drew. Too scary. Still, my husband and I did watch some Swedish police procedurals. Well, he watched while I flinched through episodes (eyes covered) of “The Bron,” featuring Copenhagen and Malmö, two cities — and two police departments — linked by the Øresund Bridge and cross-border crime.

Now, we’re finishing (whew!) the Kurt Wallander series inspired by author Henning Mankell’s mysteries set near Malmö in Ystad. We day-tripped to pretty Ystad once but skipped the tour of murder sites and the souvenir map sporting red blots for each body.

Finally, two years into my Swedish lit independent study, I’m easing into Nordic noir thanks to a rainy afternoon in Malmö a month ago, on the next-to-last day of a recent trip.

It was pouring. After a morning at the sauna, my husband and I took refuge from the rain in stadsbiblioteket. The library combines a castellated 1905 building and a new wing with a soaring, multi-story, glass-walled reading room called the ljusets kalender, “the calendar of light” (for the way illumination changes according to weather and seasonal foliage in Kungsparken across the way). Settled in comfortable chairs near the English-language books, we read and watched leaves and raindrops fall.

Stretching my legs, I wandered into the old wing’s “Malmö Room” and found tantalizing books about the city — but in Swedish, way beyond my beginner status. Then, a glossy display caught my eye: a mystery series, in English, by Torquil MacLeod.

I quickly dived into Meet Me in Malmö and read until the library closed at 5 p.m. Out on the street in the continuing downpour, we thought we’d pick up a bottle of wine and head home. But we learned the state-run liquor monopoly (only show in town), Systembolaget, had closed at 4. On a Saturday night?! We sent an SOS to our daughter to come for dinner bearing wine. Back at the flat, I brewed svartvinbär (black currant) tea, loaded my e-reader, finished Meet Me in Malmö, and queued up Murder in Malmö for the plane ride home.

Malmö is the third-largest city in Sweden, a port, with outstanding architecture, gardens, canals, and market squares. The city also has its current and historic share of violence, prejudice, and discrimination. MacLeod draws on all of this as Inspector Anita Sundström unravels and solves each case. Plot and action rule; character development and relationships are perfunctory. This is Nordic Noir Lite, bet-you-can’t-read-just-one stories for the tired tourist, nostalgic traveler, or entry-level scaredy cat.

Now, halfway through the series and recovered from jet lag, it’s time for me to try something a little more substantial — but not to leave Malmö. I’m reading Murder at the Savoy by Maj Sjöwall and Per Wahlöö, the sixth in their Martin Beck series known cumulatively as “The Story of Crime” and touted as the first and best of Swedish police procedurals. Reading out of order, I chose Murder at the Savoy because it’s set in Malmö, trusting that the local milieu will mitigate my Nancy Drew syndrome.

If not? I’ve scored a copy of the Literary Guild of New York’s 1931 edition of The Ring of the Löwenskölds, Selma Lagerlöf’s trilogy. Maybe I’ll start it on Nobeldagen, December 10th, when Annie Ernaux receives her Nobel Prize in Stockholm. Selma will be smiling.

One Isn’t the Loneliest Number

Busting the myth of the “solitary” writer.

How listening to poetry soothes my insomnia.