The perils and pleasures of wanting to learn a language. 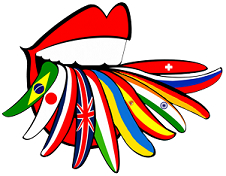 The first time it happened, I was 10, living in England for a year. Oh, I spoke the language, but not really. Every time I opened my mouth, my accent outed me. I grew cautious about raising my hand in class. More recently, I was muted in Malmö, Sweden.

Since our daughter Rebecca moved there last year, I’ve been studying Swedish online on alternate days. On even-numbered days, I practice Spanish; on odd-numbered days, Swedish. Swedish does seem odd to me, closer to Anglo-Saxon and German than the romance languages I sort of speak. A professor recited Beowulf in Old English many years ago, but that’s not been any use.

Practicing Swedish was an exercise in hope that the covid-shuttered world would open again. It did. By early summer, the United States appeared on Sweden’s list of countries exempt from its travel ban. We booked September plane tickets to Copenhagen. Malmö has a small airport, but we’d instead fly into Kastrup, take the commuter rail across the bridge between the two countries, and arrive in Malmö in half an hour.

I’d already started packing when Sweden re-imposed its entry ban for travelers from the U.S. Whether due to the delta variant, case count, or vax resisters, we were no longer deemed a “safe” country.

Before I could start unpacking, Rebecca and my husband, Harry, reassured me: The ban applied only to direct travel from the U.S. to Sweden. There was a workaround documented on the Swedish Police Authority Website. Between Nordic countries, unrestricted freedom of movement remained — even for non-Nordic travelers.

Armed with vaccination certifications and negative covid tests, we could fly into Denmark and then immediately transit by land to Sweden as we’d planned all along. So we flew from Dulles to Kastrup, breezed through Danish customs, purchased train tickets at the Skånetrafiken vending machine, rode the escalator down to the platform, boarded, and zipped across the bridge over the sparkling sound.

Had we entered an episode of “The Bron,” the Swedish/Danish crime drama named for the bridge? No. Nobody even checked our tickets. Hej Sverige!

No Swedish police, but a realization was waiting for me: Swedes speak Swedish much faster than my app. I felt dumb and fell dumb. I practiced with my app, but it seemed superfluous, especially since Rebecca’s Swedish is serviceable. She was our guide as we walked along the canals, took day trips out of town, and drank kaffe and ate pastry while practicing the Swedish coffee break, fika.

We were packing for home when Rebecca called from a bike path. She’d fallen on her way to Swedish class, fractured her ankle, and was waiting for the ambulance. Who knew language learning could be hazardous to your health?

I stayed on to provide logistical support: grocery, pharmacy, IKEA, and thrift shopping. (And pastry shopped for daily fika, essential to recuperation.) Rebecca’s first day home coincided with Kanelbullar Dag, the annual national celebration of cinnamon buns shaped like pretzels and sprinkled with pärlsocker — pearl sugar that melts on the tongue but not the bread.

I got lost on my way to her favorite bageri, but the scent of cinnamon led me to an alternate shop. Confident, high on cinnamon, I spoke up. “Två kanelbullar, tack.” The patient woman behind the counter heard me out before responding in English.

My ears sharpened as I ran errands and explored. I listened and watched, too, on the city bus. A digital screen displayed the itinerary, highlighting the next stop as a recorded voice called out. I rolled along in this audio-visual language lab, learning the extra Swedish vowels: å, ä, ö.

Walking home, I chanted: Södervärn! Celsiusgärden! (My favorite destination, Ribersborgs Kallbadhus, had no tricky vowels but did have open-air baths. One day, a woman in the sauna, naked except for her glasses, was reading The Bhagavad Gita before plunging into the cold seawater.)

Evenings, we watched a Danish doctor drama with Swedish subtitles. My personal interpreter translated. I began to get it, like a kid learning to read, to decode. Daylight broke later every day. I practiced on my app some more, discovering relevant phrases from our TV drama in the lessons on conjunctions and time of day:

Jag tycker om honom men jag älskar dig. (I like him, but I love you.)

Nätterna är våra. (The nights are ours.)

Unfortunately, though I bravely ordered pastry, I had no opportunity to practice these particular phrases. Home again, I’m back on the app. Now my husband wants to learn Swedish. I know just what to say.

A Day, a Dream

Conjuring a few magical hours of past meeting present.