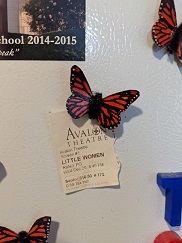 Perhaps I had some inkling. On impulse, departing from our customary post-unwrapping leisure, I rousted my family out of pajamas on Christmas Day 2019. We headed for a matinee of “Little Women.” The ticket stub from the Avalon has been on my fridge for two years now, a souvenir of the Before Times.

Later that same week, I saw it again, this time with my friend Judy. We weren’t around for the Avalon’s opening in 1923, but it was the theater where we saw “The Miracle Worker” in 1962 — the first time I went to a movie Without a Grown-Up.

Over the past two years, my husband, Harry, and I have seen lots of movies online. I have stayed awake for some, though the home screen and comfy couch lull me. But I’ve missed the real movies: a dark theater, the glowing exit sign, the sweet, greasy smell of popcorn, the communal ritual. So, though I’m cautious, in the brief window between booster and omicron, I dared three movies.

My neighborhood theater, the Uptown (where everyone went to see “Star Wars” on its enormous screen), is dark, perhaps forever, though there is recent hope for a reopening under new management. But I couldn’t wait for that uncertain future in a galaxy far, far away.

The American Film Institute in Silver Spring is walking distance from my son’s place. I’m old-school (remember my paper ticket stub), so tech-proficient Tim selected seats and booked tickets for Wes Anderson’s “The French Dispatch.” No line. We showed our vaccination cards and photo IDs, adjusted our masks, and settled in to the sparsely populated, socially distanced (sigh of relief) theater. It was a reunion with an experience, even without a tub of popcorn or pack of Good & Plenty. The movie was suitably silly for a back-to-the-movies expedition.

Still, a taste after long abstinence triggers craving. Suddenly, staying home for the next installment of our current Swedish police procedural was out of the question. “West Side Story” was playing at the Avalon. My husband ordered tickets.

We joined a block-long queue of masked, silver-haired Bernstein and Sondheim fans. A drizzle was falling as a familiar usher worked the line, checking IDs and vax passes. The Avalon has been carved up since I saw “The Miracle Worker” in ’62. Happily, the usher directed us to the original theater with the big screen.

We found our seats (each pod buffered by an empty zone). I leaned back, looked heavenward. Happy surprise! Two years ago, the painted cherubs and puffy clouds were fading and peeling. Now, the dome has been restored in glorious Technicolor. The lights dimmed, and we were off to Manhattan with the Sharks and the Jets (filmed, this time, in Paterson and Newark).

The next week found us back at the Avalon. Harry had read a rave review of “Drive My Car” by Ryusuke Hamaguchi, based on a story by Haruki Murakami. The movie is being released on a staggered, city-by-city run — playing for only a week in each.

This time, we arrived early, prepared for the long line checking our credentials and status.

No line at all. The usher directed us to the upstairs theater. Apprehensive of its smaller size, we entered.

No one in the audience, either.

Fifteen minutes passed. No one. It was almost showtime, and still no one there except the two of us, masked, in our giant, private cinema.

At last, someone came in. His assigned seat was across the aisle from us. Company on our desert island!

“We’re glad someone else is here. We’re really looking forward to this movie,” said Harry.

“Me, too,” said the masked young man. “I drove five hours from North Carolina just to see this. In January, it’s going to be playing in Atlanta, only two hours from me, but I can’t wait that long.”

Somehow, we had a feeling we were about to take off on a great ride. A few more people trickled in. The show began.

By morning, she’s forgotten her stories, like dreams. He remembers for her. The wife’s sudden death interrupts their life of make-believe. He presses on with a production of “Uncle Vanya.” Surprising interactions with his chauffeur and others open his eyes to the true story he and his late wife co-created, and lived, but did not speak of.

“Drive My Car” is an amazing movie and likely the last we’ll see in a theater for a while. We’re still thinking and talking about it. I hope that, when things improve, it will come to a theater near you. If not, consider driving five hours to wherever it’s playing. Our new friend across the aisle promises it’s worth the trip.