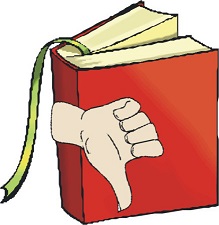 I just wrote a negative book review. It’s not something I like to do, disparaging another writer’s efforts. I know firsthand the blood, sweat, and tears that go into writing a novel, and the intense vulnerability of baring one’s soul to the harsh judgment of strangers. I don’t want to diminish the accomplishments of someone who not only has woven a whole world from thin air, but also enticed a publisher to sell it.

And yet, a book is a commercial product, which a publisher sends out twice (the advanced reader’s copy and the final product) to disinterested parties to rate. Just as it would be irresponsible for Consumer Reports to endorse every product, it would be a dereliction of duty for a reviewer to give every book five stars.

As a reviewer, my duty is to the reader, not the author (even though the author and I share some allegiance as members of the same guild). But I would be nothing more than a dupe of the publisher’s marketing division if I were to give a glowing review to every book due to a warm and fuzzy feeling of fellowship.

Bad reviews serve a purpose, guiding readers who are faced with a dizzying array of book choices and only a limited amount of time in which to read. They also provide feedback to the author, editor, and publishing industry that other businesses capture through customer-satisfaction surveys. Enough with the time-traveling vampires. That cerebral novel on corruption in government shouldn’t have been marketed as a thriller. More editorial intervention should have been exercised with that brand-name author. The struggles of returning veterans really resonate.

Though writing bad reviews is a necessary service to the reading public, there is no glory in it. Feelings are hurt, enemies may be made. The blurb won’t appear in the paperback edition, the publishing house won’t tweet the review, the author won’t send out an email blast of the review to her cronies in the literary world.

But admiration can’t be faked; nor should it be. A critic’s job is to be, well, critical. It’s to have standards, and prize certain qualities. For me, those qualities are exemplary wordsmithing, beauty of narrative, revelatory exploration of universal themes, faithfulness to historical details, consistency of minutia, and a thought-provoking message that lingers long after the book has been read.

It’s true I have high standards. I wouldn’t be a very good reviewer if I indiscriminately rated every book a masterpiece. And it’s true I have biases. I get impatient with the preponderance of novels detailing the shambolic journey to maturity of the privileged man-boy. Yet another heart-rending book about good folks resisting the evil of fascism during World War II earns an impatient sigh (there are so many other wars and humanitarian disasters to write about, people!).

Stories about people of color that are written to entertain whites and reinforce racial stereotypes — or that feature hapless minorities who must be rescued by a white savior — make my blood boil. And the clichéd, whether in prose, story, dialogue, or ending, will invariably earn my censure.

Very rarely, I will review a book about which I can find nothing good to say. Once I wrote such a relentlessly bad review that the editor asked whether it wouldn’t be better not to publish it. Uh, no. I’d slogged my way through every damn word of every damn page, taking meticulous notes in the margins, and then carefully composed a scathing assessment of the book, supported with examples and quotes.

Of course I wanted that review published! Or else all those hours spent reading the book and writing the review, all that self-sacrifice in order to save others from the same horror, would’ve been for naught. So, I added a conciliatory sentence suggesting that the author was deliberately flouting the rules of good literary taste in the pursuit of art. These days, the prevailing wisdom considers disruption a positive. Just ask Donald Trump.

However, it is the rare book that generates either all accolades or complete condemnation. Like human beings, most books are endowed with both merits and flaws. The sensitive reviewer will emphasize the good in the book while also gently touching upon the bad and the ugly.

So next time you read a negative book review, feel sympathy not only for the author, but also for the reviewer. It’s never nice to engage in writer-on-writer roughness. It’s not easy to be cruel to a fellow traveler in order to be kind to the reading public.

With books, as in life, we only hurt the ones we love.

The Arts of Resistance

Rise up by embracing writers, filmmakers, musicians, and others in the creative community.