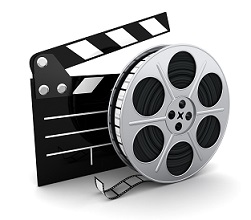 I heard someone once say that movies are the only artistic entertainment Americans view collectively. And despite this second (and enjoyable) golden age of television we're in, I think that assertion is still largely true.

I've been thinking about movies a lot lately, especially since writing my column a couple of months ago about feminism and Wonder Woman. Art is almost always a reflection of its time, and movies arguably still have higher critical appreciation than television series (likely in the same respect that novels do over short stories).

I thought it would be interesting to come up with a list of older movies that are relevant to contemporary times, but I lack any knowledge of cinematic history (there were fewer explosions in movies back then). Fortunately, I know smart cinephiles who were happy to offer up some suggestions and do my work for me.

Radha Vatsal was inspired by 1910s action-film heroines to create Kitty Weeks, an aspiring journalist who finds herself plunged into the tumultuous world of 1910s New York. Vatsal was born in Mumbai and has a Ph.D. in English from Duke University, with a focus on silent-era film history. Her newest novel, Murder Between the Lines, is available from SourceBooks.

Dr. Marguerite Rippy focuses on 20th-century film and drama, particularly the work of filmmaker/actor Orson Welles, and adaptations of Shakespeare, race, and performance. Her research has been published in the collection Weyward Macbeth; in her own book, Orson Welles and the Unfinished RKO Projects; in the co-authored Welles, Kurosawa, Kozintsev, Zeffirelli; and in numerous journals. She also serves on the American Film Institute's screening committee for AFI Docs.

“The Hazards of Helen” (1914-1917). One of a spate of silent-era action-film serials featuring female leads, “The Hazards of Helen” had a long run. Its eponymous heroine, Helen Holmes, works as a telegraph operator who takes her fate into her own hands. In episode 13, Helen loses her job when two tramps steal from her till. She spots them riding on the roof of a freight train and shimmies over a bridge, jumps onto the train, and fights them in hand-to-hand combat. All this in 1915 — when women wore long skirts and didn’t have the right to vote. Needless to say, Helen gets her job back. “The Hazards of Helen” and other serials like it show that women’s progress had reached high levels even a century ago, and that while there has been forward movement between 1915 and 2017, there have also been lulls and steps back.

“Go West Young Man” (1936). All of Mae West’s films from the 1930s are well worth watching because West was way ahead of her time. In fact, I’d argue that there really hasn’t been anyone like her before or since. West takes what’s usually a male point of view and makes it her own, without apologies and without plot twists that result in her being cut down to size. In “Go West,” which West also wrote, she plays a lusty movie star stranded in a small town where she sets her sights on handsome, buff farmhand. Her one-liners, delivered in her inimitable drawl, always hit the mark. For my money, there are no women comedians today who get to be overtly sexy, witty, not neurotic, and get the guy. It’s worth asking why.

“Kiss Me, Deadly” (1955). The threat of nuclear destruction has become front-page news again, and with this threat comes a helpless feeling. In a world that’s gone awry in so many ways, we never know enough yet also grasp that there’s nothing we can do to prevent what may happen. Will the human drive to achieve complete destruction finally win? Around us, there’s a sense of free-floating dread. Few films capture this haywire world and sense of dread related to “the bomb” like Robert Aldrich’s adaptation of Mickey Spillane’s “Kiss Me, Deadly.” It’s a private-eye story in a vicious world where the so-called hero is a brutal jerk who can’t see the big picture of the case he’s working on. Overconfidence and limited vision lead to nothing less than nuclear annihilation. This is a film time hasn’t dulled. Bleak as they come but charged with energy, it thrills while leaving you terrified.

“Journey to Italy” (1953). Ingrid Bergman and George Sanders play a British couple who have come to Italy to dispose of a house Bergman inherited. They travel through Italy by car, and they realize that this is the first time in eight years of marriage they’ve been alone. There are no friends around to distract them, no work, no daily concerns. The result: they see they have little in common and less to talk about. Their marriage disintegrates. Virtually plotless, “Journey to Italy” charts the complexity of one relationship through the nuanced, changing moods of the characters. Their difficulty feeling and communicating, their shifts between boredom and pain, their emotional indecision feel contemporary. It will strike a chord with anyone who’s been in a failing relationship where you couldn’t pinpoint exactly why things fell apart. Richard Linklater referenced the film directly in “Before Midnight.”

“Zero for Conduct” (1933). Before Wes Anderson, before Steven Spielberg and Francois Truffaut — to name three directors who’ve made strong films about children — there was French filmmaker Jean Vigo, whose 41-minute film, “Zero for Conduct,” is a blast of anarchic surrealism set at a boarding school. As long as there are institutions in place where the adults’ role is to impose order on children, and the children, through their unruly behavior, resist that control, this film will be relevant. It doesn’t analyze youthful rebellion so much as simply portray it, and this portrayal is funny and charming. Of course, it’s entirely on the children’s side and shows no sympathy whatsoever for the school authorities. Down with stifling institutional rules and the bureaucracy, and up with imagination and the spirit of play. “Zero for Conduct” lays out this formulation with guiltless purity.

“Front Page” (1931) and “His Girl Friday” (1940). Depending on whether you’re in the mood to see director Lewis Milestone’s original adaptation of the Ben Hecht/Charles MacArthur stage play, or Howard Hawks’ gender-flipped 1940 remake, either film will draw you into the intersection of crime, politics, and journalism, probing the grey areas of morality through comedy. Hawks’ remake with a female lead transformed the banter between Cary Grant and Rosalind Russell into a style of flirtation that became a cliché of witty working couples onscreen. The film plays with issues of corruption, law enforcement, and mass-media politics that continue to resonate. Milestone’s original is more radical in many ways, however, since pre-code treatment allows the depiction of an explicitly sexualized, gendered workplace, complete with nude pinups and the abuse of a self-sacrificing woman of ill-repute. The explicit representations of harassment, violence, and destruction, all within a comic frame, transform the film into a piece of cultural evidence as well as cultural commentary.

“Within Our Gates” (1920). Director Oscar Micheaux’s answer to D.W. Griffith’s white-supremacist epic, “Birth of a Nation,” matures before the viewer’s eyes, moving from melodrama to social commentary as the multiple plot turns unwind. Micheaux’s silent film may be the earliest feature film by an African-American director, and it hints at the rich variety of stories that were silenced and censored by institutionalized racism and sexism in Hollywood. Micheaux’s film depicts the outrage of lynching, the dependency of American capitalism on white supremacy, and the institutionalized rape of black women, all shrouded within the veil of commercial melodrama. Its bold storytelling is a stunning achievement for its time and, unfortunately, would be an achievement for contemporary Hollywood, as well.

Why giving up the fight isn’t an option.