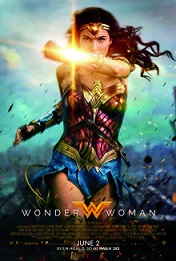 It was right around the time that Wonder Woman punched through a sniper tower that I thought, “Oh, hell, yes.” You’ve heard of the movie, right? Record-breaking, box-office success, first major action movie helmed by a female director, breathing life into DC Comics’ hapless (to this point) movies? That's the one.

For those who don’t know, Wonder Woman serves as the origin story for its titular character (otherwise known, less excitingly, as Diana), beginning with her childhood on the mythical island of Themiscyra, a land populated only by women.

I was reminded, as we watched Diana grow and train, of a course I studied years ago in pursuit of my Master’s at Marymount University, and how those books may have informed her homeland. The class was a study of feminist utopias as depicted in literature (taught by a great professor, Dr. Karen Waters).

My reading list included, among other work, Marge Piercy’s Woman on the Edge of Time, Elizabeth Gaskell’s Cranford, and Charlotte Perkins Gilman’s Herland.

Here's proof that I did my reading:

“‘They would fight among themselves,’ Terry insisted. ‘Women always do. We mustn’t look to find any sort of order and organization.’”

That line has always struck me, especially given the oft-repeated notion — postulated by both women and men — that there’s an inherent quality in women that puts them at odds with each other. Some say it’s derived from a woman’s nature, demonstrated in this clip from “Family Guy.” Some say it’s born of competition or judgment, like this recent quote from Kellyanne Conway: “It turns out there are a lot of women who just have a problem with women in power.”

I thought this assertion was a recent phenomenon; at the least, more recent than Gilman’s 1915 novel. But there’s an interpretation in her work that isn’t hard to understand — that women are fundamentally unable to collectively agree is a male concept meant to poison any attempts by women to unite. After all, an important element of keeping any group under your thumb is the sowing of discord. And, like any stereotype or urban myth, it’s been passed down, believed, and dutifully repeated.

We spend only a brief time in Themyscira in Wonder Woman, but the island is portrayed as orderly and productive. There are certainly disagreements — Diana’s training and the subsequent direction of her growth are the product of a dispute — but those disagreements are settled via rational debate. And, astonishingly to the writers of “Family Guy,” without violence!

“That bar in Chicago where the Chicana dykes hung out shooting pool and cursing like men, passing comments on the women who walked by. Yet they had never given her that sense of menace a group of men would — after all, under the clothes they were only women too.”

– Woman on the Edge of Time, Marge Piercy

“Be careful in the world of men, Diana,” her mother, Queen Hyppolyta, tells her, as Diana’s about to leave Themyscira, “for they do not deserve you.” That line could have been said by any parent to any child as she is about to leave home, but Hyppolyta has been loath to allow her daughter any knowledge of the ugliness that the world of men brings. The women of Themyscira train for combat, but strictly in terms of defense. Diana is, then, stunned to discover the level of violence the world of men offers, but her mother held no such illusions.

And yet Diana is eager to fight as a child, entranced as she watches warriors train. But she learns the heavy consequences of violence as the movie progresses, and then its relative futility, and ultimately, its sparse necessity. But this reluctance is not a lesson humanity will similarly remember and, given that the movie is set during the First World War, we know it soon forgets.

In our world, violence is close.

“‘What a number of books he has!’ said Miss Pole, looking round the room. ‘And how dusty they are!’”

Come on, that Gaskell line is hilarious, but I get why some might be offended. Critics of feminism often accuse it of male-bashing and, as such, it's interesting to consider Steve Trevor (Chris Pine's character) as the male co-lead and Diana's romantic interest.

For me, no scene better defines their relationship than the two of them running through an occupied village, Diana sprinting across rooftops and Trevor racing through the street below, fighting in concert. They respect each other, learn from each other, and eventually love each other. Trevor's ultimate action, a moment of self-sacrifice, ties into that concept, and his final scene is a clear-eyed understanding of Diana’s selflessness.

It may feel, lately, like social progress has been thrown down the stairs, so it's alternately sad and lovely to see the lessons so many wonderful writers put forward years ago implemented today. And it's awesome to watch an action hero punch through those cultural setbacks as she learns that her power and potential just might be goddamned limitless.

(On a somewhat unrelated note, my collaborator DJ Alkimist and I have released another track! You can check out "Silence" here.)