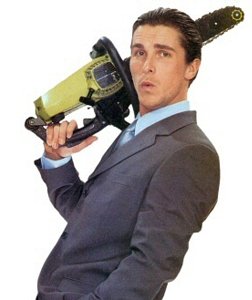 I remember watching this soldier, who was a couple of months back from Iraq, addressing a group of high-school freshmen; the boys in the class were especially excited to hear him speak.

The soldier talked a little about what he did in the military, why he had been in Iraq, said some nice things about the Iraqis he had met, and then asked if anyone had questions. It didn’t take long for one of the kids to ask the biggie: “Have you ever killed anyone?”

The children leaned forward; they all wanted to know.

The soldier took some time to respond. “Yes,” he said. “I did.” And then he left abruptly.

I think a lot about those kids and that soldier when I think about violence.

The most explicitly violent book I’ve ever read is Bret Easton Ellis’ American Psycho. I wasn’t the only one who thought so. The violence was considered gratuitous and misogynistic when it was published, and it’s still a rough read. But I liked it. I didn’t love the horrific moments (and there were many), but I admired how they were written and thought they were necessary for the story.

That’s not to say that I think violence must be explicit. Alongside American Psycho, I rate Flannery O’ Connor’s famous short story, “A Good Man Is Hard to Find,” as one of the most brutal works I’ve read. It ends (SPOILER ALERT) with members of a small family being led into the woods and executed, and the shock of the murders lingers long after you finish the last line. But there’s no description of the killings aside from the sound of gunshots. Nothing in the story could be consider gratuitous.

Well-written stories like these represent, for me, the purpose of violence in literature. I don’t find it offensive; what strikes me as tasteless are writers (of books, television, or film) whose violence has no consequence.

Nothing irritates me more than the boilerplate tough guy in thriller fiction; the character, almost always male, who has “seen some shit, man,” but it only affects him in romantic ways. He still sleeps with the female lead, still manages to have a few friends, still has a rough sense of humor.

It’s the stereotyped, lazy, mindless form of character creation. These writers throw in a couple of clichéd lines like, “I see the faces of the men I’ve killed at night,” in the hopes of adding depth, all the while skirting the deeper, more difficult story of how a character who lives in that violent world can continue to do so, and the emotional toll it takes.

But there are many writers who refuse to take the easy way out. I’ve been reading through 2014’s Best American Mystery Stories and have come across story after story (my personal favorite, so far, being Roxane Gay’s “I Will Follow You”) that deal with violence and its aftermath in brutal, beautiful fashion. And this is a trend I’ve noticed more and more in thrillers — maybe because of the violence that envelops America, and the fact that we have to regard it somewhat realistically. You think about Sandy Hook, and the romance is lost.

Reading back over this column, I wonder if I’m being too hard on the “tough guys” in today’s thrillers. After all, I’m a fan of 80s action movies, comic books, and MMA, and I like to see the bad guys get what’s coming to them. Maybe I’m just harder on novels since I write them and think they have more room to explore all sides of an issue.

But you can’t control the reaction to what you write or how it’s interpreted. I was impressed by American Psycho, others were horrified; who knows what response Ellis wanted?

In my own books, I wanted some of the violence to be uncomfortable and all of it to be necessary. People liked it, others hated it, and some still give me a wide berth. In the end, all you have is your intent.

I think about those excited kids waiting for that scarred soldier to tell his story. And I write about violence to write against it.

(Speaking of crime fiction, Dames at Dusk was postponed due to weather. The new date is 5/3/15. Follow its Facebook page for updates.)