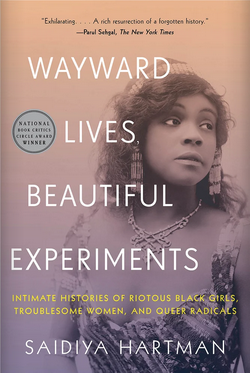 Ideally, a good book review makes the reader want to read the book being covered. I very much hope I can do that with this column. Because, with Wayward Lives, Beautiful Experiments, Saidiya Hartman has added something so dynamic and alive to the conversation on race in this country that everyone has reason to bear witness to it.

But initially, let’s consider two precursors, Isabel Wilkerson and Annette Gordon-Reed. Hartman is a sociological scholar examining, as her book’s subtitle indicates, “Intimate histories of riotous black girls, troublesome women, and queer radicals” in the burgeoning ghettos of the American Northeast — including Philadelphia and New York — from 1890-1930.

This is a narrower slice of the Great Migration than Wilkerson examined in The Warmth of Other Suns. Yet where Wilkerson’s monumental work speaks more to the average, striving, middle-class Black experience in the U.S. (horrific as that has been), Hartman is keenly observing young women so perversely and systematically marginalized that it’s safe to say there was no warmth in their suns at all.

I’ve written about Annette Gordon-Reed before, as she is something of a hero to me. Her scholarly work on the Hemings family has forever altered — for the better — the way Americans understand Thomas Jefferson. I could easily make this another article about Gordon-Reed, but I’ll mention just one aspect of her work, one short period in the life of Thomas and Sally: the months when Jefferson prepared to leave Paris after five years as ambassador to France. In those months, it became clear that Sally was pregnant and that she could claim her freedom and stay in France.

Gordon-Reed suggests that Tom and Sally must certainly have negotiated her returning to Monticello with him to become a slave on a plantation again, to remain his concubine for the rest of his life rather than live as a free woman in Paris.

But Gordon-Reed, the cautious historian, doesn’t shift into the fictive and present those negotiations — Tom and Sally’s interpersonal relations. The key work that Gordon-Reed did was to say that there is enough evidence to speculate (with confidence, against the objections of those who prefer the white supremacist myths) about Sally’s individual agency. She was less passive than history had insisted.

This is the space that Hartman steps into, discovering the ways that Black women pursued and manifested their own agency in a world that would deny them it. Before they even found themselves in Northeastern cities, these women were dealing with the catastrophic consequences of generations of enslavement.

Their strong family connections had been eradicated. They had no examples of stability to pattern their lives upon. They had no welcome in society to secure themselves. They didn’t know what freedom [italics mine] was! As Hartman writes:

“Freedom was the promise of a life that most would never have and that few had ever lived. But who could bear this? So colored folks were still looking, picking up and moving on, again and again.”

Hartman demonstrates that the itineracy of Black men and women, their extra-legal social and intimate relations, were both an extension of abusive racial inequality and a seeking of freedom:

“The very idea of this wild break-you-down love thrilled the young women because they imagined it as something akin to freedom, the submission enjoyed by the one who chose it, a reckless act of self-expenditure.”

A most complex idea of freedom, and if this miasma of complexity intrigues you, let me say that Hartman’s writing is dramatic, dynamic, and comfortably closer to fiction than to sociology or history.

Hartman is speculating about how these “lost” women lived their lives, what powers they sought, what powers they possessed. She centralizes her gaze upon sexuality as a means for women to make choices and practice their freedom. Equally, society saw those individual expressions of sexual freedom as corrosive to decency.

For a reader such as myself, this is a sickening perversity of white society, stripping all agency except their sexuality from Black women, and then finding ways to punish them anyway for exerting sexual freedom.

Hartman starts several chapters with a picture and an extended description of the mystery it conjures up. One example: “The small naked figure reclines on an arabesque sofa…it is easy to mistake her for some other Negress…lose sight of her among the surplus of colored women in the city, condemn and pity the child whore…Fragments of her life are woven with the stories of girls resembling her and girls nothing like her, stories held together by longing, betrayal, lies and disappointment.”

As Gordon-Reed reimagined the daily life of Sally Hemings, so Hartman reimagines the life of this vulnerable, exposed young girl on the photographer's sofa. There are so many “fragments,” so many “stories” that, even though this girl has no name, Hartman is compelled to that imagining, “The only thing I knew for sure was that she did have a name and a life that exceeded the frame in which she was captured.”

Who cannot see that Hartman’s compulsion to retrieve these supposedly desperate and lost lives is noble? And it’s not just her task. Many historians and sociologists seek to fill in the record and have been doing so as far back as W.E.B. DuBois, who makes an appearance in the book during his studies of the lives of Blacks in Philadelphia early in his career.

For the powerful necessity of this reclamation work, for the intensity of the language the author employs, for the sake of understanding the erasure of Black lives in American history, I highly recommend Wayward Lives, Beautiful Experiments.

Y.S. Fing is continually amazed at how resistant white America is to seeing the truth of its racial history.

A reflection on the philosopher’s enduring enlightenment