When the pros behind the scenes become authors themselves. 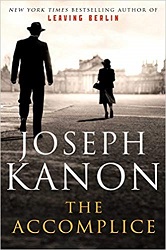 Journalists are often thought to be failed novelists. After all, if you can write, why not be Stephen King and make millions churning out bestsellers? Obviously, not everyone can duplicate King’s publishing success, but the suspicion is still there that most journalists tried at some point to break into books and failed.

Book editors and publishers are not suspect in the same way. Recognizing writing talent is different than having that talent. Even editing is seen as a different, and lesser, skill.

But put yourself in the place of a book publisher who sees hundreds of manuscripts crossing his or her desk, many of them going on to become bestsellers. If they didn’t have the itch to write a book at the outset, they might develop one over the years. Toni Morrison and Margaret Atwood are among the best-known book editors turned writers, but there are many others.

My favorite is Joseph Kanon. The longtime editor-in-chief and CEO at Houghton Mifflin and Dutton, who was born in 1946, started writing his first book, Los Alamos, in 1995. When it was published in 1997, it became a bestseller and won the Edgar Award for best first novel.

It deals with intrigue around the building of the atomic bomb and bears many of the characteristics of Kanon’s subsequent seven novels. It is atmospheric in the way an Alan Furst novel is, conjuring up the secret site of the bomb in the first novel, just as Kanon will sketch more exotic locations like Venice in Alibi or the Bosphorus in Istanbul Passage.

Kanon’s heroes are world-weary and worldly men of middle age who almost invariably engage in an affair with a married woman. They are usually American, expatriate as the case may be, moving through a fog of mystery familiar from the Furst novels. Kanon stamps his descriptions with a certain literary quality, though it is not overwritten like so many debuts.

The writing evokes an atmospheric quality, like a black-and-white film. The reader can see and feel the slick cobblestones and evening mist in Istanbul. Furst says he watches films from the period between the wars that usually features in his novels. Kanon says it was an anonymous 1954 book, A Woman in Berlin, a diary from the period of his 2015 Leaving Berlin, which gave him the intimate details to re-create that time and place.

Kanon focuses on the period right after World War II or just as it is ending. The world was being refashioned under U.S. dominance as the front between this country and its erstwhile ally, the Soviet Union, hardened and froze.

The Good German is probably Kanon’s best-known book, as befits a novel made into a movie starring George Clooney and Cate Blanchett. The author’s clipped dialogue — characters speak and think in phrases rather than full sentences — seems tailor-made for the screen, but this mystery set in 1945 Berlin is the only one of his books to be turned into a film. (Similarly, Furst has seen only The Spies of Warsaw come to the screen, as a TV miniseries.)

Kanon sometimes leaves the early years of the Cold War for later periods, as he does in The Prodigal Spy, though that plot is rooted in those early years. His forthcoming book, The Accomplice, scheduled for a November release, takes place in the 1960s in Buenos Aires, again with a plot dating back to the war. His most recent book, Defectors, starts in 1949 but also shifts to the 1960s Cold War.

Literary, atmospheric, and cynical as they may be, Kanon’s thrillers succeed because they maintain the suspense and mystery of times and places filled with those things. It’s not as easy as he makes it look.

Starling Lawrence, the longtime editor-in-chief at W.W. Norton, also debuted as a novelist in 1997 with an historical thriller, Montenegro. He had less success than Kanon because, despite Lawrence’s own considerable literary qualities, the book, set amid the Balkan intrigues prior to World War I, does not move with same sure pace of a Kanon novel.

In any case, Kanon, now in his 70s, and after publishing eight novels over a 24-year period, clearly has no aspirations to be a literary comet. But he has been more successful than most in making the transition from editor to writer.

A Most Wanted Man