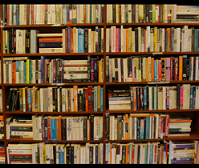 It was the standard answer every time my kids needed a novel for English class. "We don’t have to buy that,” I’d say. “We have it...somewhere."

The girls would roll their eyes. They knew that if by some chance I did find The Scarlet Letter, it would be the wrong edition. But they would go along with the charade because every so often we would hit paydirt — not just Homer’s Odyssey, but all the notes I made on it when I was an English teacher.

I would look everywhere for the missing volume — the living-room bookcase, the office shelves, even the basement, the black hole of book-dom — all to no avail. What I realize now is that some of those titles were hiding in plain sight: They were double-booked.

Ah, yes, the common ploy of bibliophiles, especially those with a touch of the hoarding instinct. Because what could be more natural than shelving one row of books behind another?

The thing is, I usually remembered where I’d done this and searched accordingly. But not long ago, I found an entire cache of volumes that had been missing for years, each so neatly tucked behind its shelf-mate as to give no clue to its existence.

I’ll admit I felt vindicated, for here were some of the titles we looked for long ago, including The Scarlet Letter. But even more exciting were the gems I’d forgotten we had. There was Zen and the Art of Motorcycle Maintenance, two copies of Margaret Drabble’s The Realms of Gold, and all four volumes of the Raj Quartet.

What joy! It was like discovering a secret passageway in the attic or another layer of truffles in the chocolate box. Here were books I knew and loved, yellowed and dog-eared, many already old when I bought them and so sporting ridiculously low price tags of $1.75 or $3.50. Here were books that look the way books should, cracked bindings and all.

The volumes that lend themselves to double-booking are mass-market paperbacks, which dominated my collection back when my shelves were made of egg crates. So I handle these recent finds with care to protect their spines and keep their pages from falling out.

But this is in keeping with their overall preciousness. They date from much earlier in my reading life, when individual books threw longer shadows than they do now.

I remembered the hot summer when I read Zen and the Art of Motorcycle Maintenance and marveled at its profundity. It’s an opinion I later revised, but picking up this battered green paperback made me think that if I read my original copy, the words and ideas would shine again with their old luster.

The Realms of Gold harks back to a time when I gobbled up every Drabble novel I could find. The fact that I had two copies of this one was proof of that. And though I knew I should get rid of the extra one, I’m hanging onto it.

As for the Raj Quartet, just one glance at the familiar yellow covers made me want to plunge again into the faraway world it created, which I inhabited quite happily for several months in the mid-1980s.

Finding these books was not unlike seeing classmates at a reunion and thinking how good we all look, even though viewing photos later would tell a different tale. In person, remembered faces animate older ones, so what we see is actually a composite portrait, layers of life in one human form.

These old books are like that, too. They hold within them not just the author’s words but the way I interpreted them as a younger person. They are relics of a reading life that runs through seasons and decades.

Since my unexpected windfall, I’ve explored every row of books in the house, hoping for another big haul. I haven’t discovered one. But there are boxes of books in the basement I haven’t opened for years. That’s where I’m looking next.

Anne Cassidy has been published in many national magazines and newspapers, including the Washington Post, the New York Times, and the Christian Science Monitor. She blogs daily at A Walker in the Suburbs.