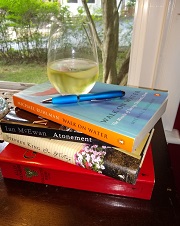 “See?” read the snarky note that fell out of a novel my daughter had just returned to me. “Anything can be a bookmark if you want it to be!”

Apparently, my dog-ear method of marking my place bothers her. (And millions like her; there are countless memes devoted to this subject.)

But to those who treat their books like relics in museums, I offer this: Museums are places you visit. Bookshelves are where you live.

And the longer you live, the more people you lose. How much would you love to someday discover their stories inside yours?

My father left when I was 13 and died of a heart attack when I was 22. When I picture him from childhood, he’s always surrounded by three things: a cup of black coffee, a lit Tareyton 100 (see “heart attack,” above), and a book.

The specific novel — usually a Ken Follett, Robert Ludlum, Leon Uris, or Herman Wouk — changed often, but the fact of it never did. My high-school-educated dad was a voracious, happy reader.

After he died, I inherited a small stack of hardcovers from his wife. There was a shiny Tom Clancy, an uncracked Scott Turow, and even a Uris or two.

But when I looked at those books — their spines unbroken, their glossy covers untouched by mortals, their pristine pages paper-cut sharp — I was overwhelmed by a feeling of…nothing.

If just one had had a coffee-cup ring on it, a fragmented phrase jotted in a margin, or an underlined paragraph, I would’ve pored over it like the Rosetta stone, its hidden meaning — Why mark this sentence? Why bend that corner? — mine for the deciphering.

Instead, these books could’ve belonged to anyone, and there’s a good chance my father never held them. They were likely post-divorce replacements, duplicates acquired during marriage number two, or even gifts destined for him but purchased too tragically early.

I couldn’t find Dad in any of them.

It’s going to be different for my family. Decades from now — or sooner; longevity isn’t an issue for Smiths — when they look through my books, my children and grandchildren will learn all about me, even if it requires some sleuthing.

That thick, red Collected Poems: 1947-1980? It contains as much of my writing as Allen Ginsberg’s. Adolescence was fraught, and the Beat poet’s aggressive verses made it no less so. But his words ignited my frantic passion for poetry; his brashness fueled mine. If my kids open it someday, they’ll meet their teenaged mother in the messy comments scrawled throughout.

No less bruised with ramblings are Stephen King’s On Writing, Anne Lamott’s Bird by Bird, and William Zinsser’s On Writing Well. Highlighted passages aside, their sheer wornness may alert my kids to the fact that Mom, like all writers, despaired of her talent and sought reliable buoys.

Things could get murky when my family comes across my most-cherished books, which have been felony-level manhandled. Will my kids gather that a single dog-eared corner may mean I’d paused for the day there, but could also indicate a breathtaking turn-of-phrase lurks nearby?

And will they guess that a folded-once bottom corner definitely means something extraordinary awaits on the page? Or that an accordioned corner is the map’s “X,” only I must not have had a pen handy to mark the treasure’s precise spot?

Sure, the rented-mule condition of Mikhail Bulgakov’s The Master and Margarita and Erik Larson’s In the Garden of Beasts should clue my kids in to how much I loved these books. And the near-death state of Michael Ruhlman’s Walk on Water will be understandable given our youngest daughter’s medical history.

But what to make of Ian McEwan’s water-mottled Atonement or Hilary Mantel’s equally blotchy Wolf Hall? Will my kids guess the dried drops are tears spilled over works so exquisite it hardly seems fair? Or might they assume the moisture is from a long-ago, sweating glass of Chardonnay? They won’t be wrong either way.

And when they see the half-moons etched into the cover of McEwan’s On Chesil Beach, will they suspect those are from my fingernails? Will they wonder why?

If they notice that Anthony Marra’s A Constellation of Vital Phenomena, Jesmyn Ward’s Sing, Unburied, Sing, Leo Tolstoy’s The Death of Ivan Ilych, Philipp Meyer’s The Son, and Han Kang’s The Vegetarian have been brutalized by creases, rips, and ink, might they linger on particular pages for a few extra seconds, their eyes landing on the same passages mine once did? It would be akin to me reaching back through time to tilt their gazes in the right direction.

Or will the stacks of battered stories only frustrate them, their own North Stars orbiting outside the bookshelf?

I have no idea. But I want my kids and grandkids to see these books and appreciate that, while I’m not waiting for them in some fictional afterlife, I’m right there in the fiction and nonfiction I loved.

It’s not a spectacular inheritance, but it’s a real one.

And as for all those splotches and scribbles, I hope that, by them — to paraphrase Colin Winnette’s Coyote, another worn favorite — my family will know me.

Holly Smith is editor-in-chief of the Independent. The condition of her books is a national disgrace.