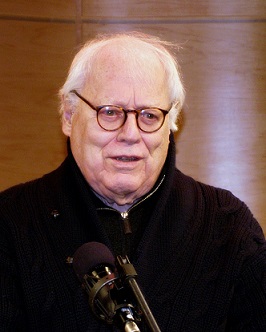 The death last week of publishing giant Jason Epstein, 93, merited a full-page obituary in the New York Times. It was written by Christopher Lehmann-Haupt, the late editor of the New York Times Book Review, who himself died in 2018 at age 84.

Italics at the bottom noted that William McDonald and Alex Traub “contributed to this reporting,” presumably adding the basic facts of Epstein’s death and survivors. This was what in the newspaper trade is known as an “advance obit,” most of which had been compiled and written by the now-deceased writer and was just awaiting its subject’s demise.

In 2011, I was honored to interview the then-still-very-much-alive Epstein, co-founder of the New York Review of Books; a trade paperback and print-on-demand pioneer; the founder, with critic Edmund Wilson, of the Library of America; and the longtime Random House publisher and editor of such luminaries as E.L. Doctorow, Noman Mailer, Gore Vidal, Alice Waters, Paul Goodman, Jane Jacobs, Saul Alinsky, and Philip Roth.

Epstein was a mere 83 and still editing and publishing when we met. We were quickly on a first-name basis, and so it shall be here. His current project was to edit Princeton religion professor Elaine Pagels’ volume about the New Testament Book of Revelation.

“He’s an extraordinary editor, with great detail, great precision, and a tremendous eye for how writing moves,” Pagels told me. “I feel everything I know about writing I know from Jason.”

My assignment was to profile the 1949 Columbia College graduate for Columbia College Today, our alumni magazine. I’d called to arrange the interview, and Jason eagerly invited me to “come on.” He was living with his wife, former New York Times reporter Judith Miller and, as an outspoken conservative, his political opposite, in a large, five-room co-op apartment in what had been the landmark New York City Police headquarters building in Lower Manhattan.

He was wearing a grey sweater and corduroy pants and had wispy, snow-white hair. For some three hours, we sat and chatted in his kitchen, where he was also known to be a quite a good cook — and the author of a 2009 memoir, Eating. Also in the vicinity was Hamlet, a black cockapoo.

There were books everywhere, on the kitchen table and on the Louis XVI dining room table, and thousands more at his second home in Sag Harbor, where he also grew herbs. Many were signed and inscribed to him. Doctorow went one better, dedicating his novel Billy Bathgate to Jason.

“The kitchen is his favorite place,” Judith Miller told me. “The real library is in Sag Harbor. With all the stacks of books and papers, believe it or not, he’s very neat. I’ve met many world leaders, great thinkers. He’s a class unto himself.”

While it’s been almost 10 years since we spoke, some of what Jason said seems very much of the moment. “I have an office, but I don’t like to go to offices. I don’t see the point of them,” he told me. “I like working alone. I like my colleagues, but I don’t like sitting down for a long time. A traditional publisher doesn’t even need an office. All he needs is editors in touch online. A company can be in India, San Francisco, anywhere.

“When I first heard about digitization, I knew publishing would change radically,” he said. “I think Facebook will be a very important component of the publishing industry in the future. And social networks. It is the way books will be sold.”

He had a Kindle but didn’t use it or know where it was. Such devices were for ephemera, he said. “But I think it’s very important to keep physical books.”

Jason was mixed on the idea of the “first draft” falling victim to technology as computer screens came to replace typewriters. “There are marked out printouts. But there will not be an original manuscript. There can’t be,” he said.

“It’s a loss to archivists and people who like to look at notes in handwritten margins. It’s a loss, but not a huge loss. It’s nice to have Shakespeare folios, but even without them we have Shakespeare. I use edit-tracking sometimes, but it makes me nervous. I like to think about a manuscript with a pencil in my hand.”

Jason generously shared contact information for some of his authors and associates with me, including Doctorow, Bob Silvers (the longtime co-editor of the New York Review of Books), and Pagels, and all were effusive about their favorite editor and publisher. But the list of those who could be reached was limited. “You’d have to be in heaven to find most of them, I think,” he told me.

Now, Jason Epstein has joined them.

Eugene L. Meyer, a member of the board of the Independent, is a journalist and author, most recently, of Five for Freedom: The African American Soldiers in John Brown’s Army. He has also been featured in the Biographers International Organization’s podcast series.