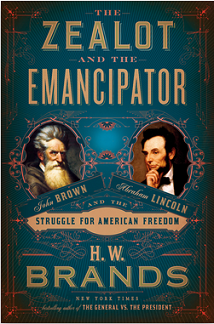 Besides the hundreds of thousands of men who lost their lives in battle during the Civil War, the issue of slavery in the United States also set the stage for the dramatic deaths of two iconic martyrs: John Brown and Abraham Lincoln. Obsessed with a desire to free slaves that had consumed him for 25 years, Brown died by hanging after being found guilty of murder, treason, and conspiring to produce an insurrection in Harpers Ferry, (now West) Virginia, in October 1859.

Lincoln, America’s greatest liberator, was murdered on Good Friday in April 1865 by the racist John Wilkes Booth when the assassin responded with deadly conviction to the president’s issuance of the Emancipation Proclamation, advocacy of the Thirteenth Amendment (which prohibited slavery), and leadership as commander-in-chief for the victorious Northern army in the Civil War.

As covered in H.W. Brands’ engaging new book, The Zealot and the Emancipator: John Brown, Abraham Lincoln, and the Struggle for American Freedom, despite the men’s shared ultimate goal and repeatedly stated belief that they trusted God to produce the desired result, and the fact that their quest to free the slaves resulted in their own deaths, Brown and Lincoln were polar opposites in their approaches to bringing an end to the evil institution.

John Brown sought an immediate end to slavery — which would necessarily involve killing — manifested by his delusional strategy that as soon as word got out about his small group’s takeover of the Harpers Ferry armory, Southern slaves in the area would immediately rise up in unity, flee from their owners, join his movement, and fight to the death for their freedom. Despite his plan’s insane premise, Brown moved forward, convinced God had inspired it.

Abraham Lincoln abhorred Brown’s murderous tactics and instead sought to obtain a gradual end to slavery by working through the political process, though his nonviolent approach to the issue also failed. His election to the presidency in November 1860 prompted seven Southern states to secede from the Union, and shortly after his inauguration, Confederate soldiers fired on Fort Sumter to commence the Civil War. As more states then seceded, Lincoln swallowed the same bitter pill Brown had digested years before: The slavery issue could be resolved only by blood.

In the mid-19th century, the institution of slavery was seen as a great evil by most people in the Northern states and as a labor force necessity by most in the agrarian South. Those in the border states and Western territories split on the issue. Not surprisingly, the conflicting views met head-on for the first time in Kansas in May 1856 — first with the “sacking” of Lawrence, Kansas, by the town’s pro-slavery sheriff, followed by the abolitionist response at the Pottawatomie massacre engineered by Brown and his sons, which resulted in the murder of five pro-slavery activists.

In his acknowledgments, esteemed history professor and two-time Pulitzer finalist Brands says that his University of Texas students “can’t get enough of John Brown.” That’s not surprising given what a uniquely strange person he was — a man who fathered 20 children (nine of whom died young) with his devoted wife; moved his large family around the country “like an Old Testament nomad”; always made sure to distance himself from his neighbors; “consecrated his life to the destruction of slavery” after a church service in 1834; planned his liberation strategy in a mode of “hating the word caution”; shared his homicidal emancipation strategy with Frederick Douglass (who opposed it) in 1847 and again before Harpers Ferry in the summer of 1859; was hosted and praised in the East by the likes of Henry David Thoreau, Ralph Waldo Emerson, and Henry Ward Beecher; was an earnest man who prayed with his men daily and never used profanity or allowed it in his presence; and repeatedly acknowledged that his confrontational, violent strategy for achieving liberation would surely result in his death.

Lincoln’s history in addressing slavery is well known, such that Brands’ parsing it is a trip over well-traveled ground. After completing one unsatisfying term as an Illinois congressman from 1847-1849, and observing his political hero Henry Clay successfully negotiate the 1850 Missouri Compromise, Lincoln was satisfied with the federal government’s handling of the slavery issue, such that upon his return to Springfield, he committed to resuming his full-time law practice.

Four years later, he was so “thunderstruck” that he resumed his political career when his longtime political rival, U.S. Senator Stephen Douglas from Illinois, pushed through the Kansas-Nebraska Act of 1854, which nullified the Missouri Compromise and provided a means for slavery’s expansion in the West on the grounds that states’ rights should prevail over the federal government in determining how widely the institution could spread.

He then became the newly formed Republican Party’s nominee to challenge Douglas for his Senate seat in 1858, causing Lincoln to gain national prominence during their seven debates, which focused largely on the slavery-expansion issue. Though he lost that election, Lincoln defeated Douglas in the presidential race two years later primarily because the slavery issue had split the Democratic Party into Northern and Southern halves.

As president-elect, Lincoln watched helplessly as six Southern states followed South Carolina’s lead and seceded before his March 1861 inauguration. His First Inaugural Address famously ended with a plea for reconciliation guided by “the better angels of our nature,” and reflected his eloquent effort to persuade the country to hold together, as he assured Southerners he had no intention of abolishing slavery where it already existed.

Unfortunately, the speech failed to achieve Lincoln’s objective…and the war came…a month later. During the first 16 months of his presidency, when his stated sole purpose in pursuing the war was to bring the seceded states back into the Union, Lincoln watched the Northern army lose battle after battle, as he struggled to turn the tide and also find the best solution for dealing with slavery.

After considering but ultimately rejecting a policy aimed at deporting and then colonizing slaves, and also one having the federal government purchase slaves from their owners and then liberate them, Lincoln finally settled on the idea of issuing the Emancipation Proclamation, effective January 1, 1863, which would provide freedom to runaway slaves from Confederate states and then use them to support and expand the Northern army as a matter of “military necessity.”

The chosen strategy worked as a means of restocking the Union’s depleted troops and, more importantly, giving the country a new cause worth dying for. Lincoln’s perspective on blending the abolition of slavery into the war effort crystalized with the words he chose for his Gettysburg Address in November 1863, opening with the history lesson that, 87 years earlier, the Founders had moved forward with their Declaration of Independence, and stated for posterity that our country would forever be “conceived in liberty and dedicated to the proposition that all men are created equal.”

Three-and-a-half months after the Gettysburg Address, and hugely important to the North’s ultimate victory, Lincoln chose Ulysses Grant as Commanding General of the U.S. Army. By January 1865, with the end of the war on the horizon due to Grant’s increasing stranglehold on Lee’s Army of Northern Virginia and Sherman’s takeover of Atlanta and his “March to the Sea,” Lincoln pushed through Congress the Thirteenth Amendment. Three months later, the war ended.

Brands concludes his fast-paced book with a grand flourish, bringing the seemingly disparate legacies of Brown and Lincoln into sync, guided by the words of Frederick Douglass, a man who had known both martyrs for the cause of abolishing slavery. In a speech at an African-American college in 1881, Douglass’ remarks put bookends around this landmark “struggle for American freedom,” saying first that “Brown began the war that ended American slavery and made this a free republic.”

He then paid tribute to Lincoln’s many acts of wisdom in guiding the country during his presidency: He “saved for you a country, and he delivered us from bondage, according to Jefferson, one hour of which was worse than ages of the oppression your fathers rose in rebellion to oppose.”