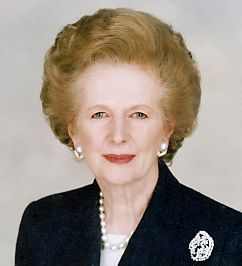 Margaret Thatcher, one of the most important and controversial figures of the 20th century, has just died. If one wanted to observe her passing by reading a book, or two, about Margaret Thatcher, where would one begin? I have not read any of these books, yet, but here is my proposed reading list.

One good starting place would be her own memoir of the first part of her life: Margaret Thatcher: Path to Power, published by Harper & Row in 1995. Even in the first few pages, Thatcher’s voice comes through loud and clear. Her father, she writes, was “a man of firm principles,” and “a refusal to alter your convictions just because others disagreed or because you became unpopular” was “instilled into me from my earliest days.” This book carries the story from her birth, over her family’s grocery shop in Grantham in 1925, up to 1979, the year in which the Conservative party won the election which made her Prime Minister.

Thatcher’s memoir of her 11 years as Prime Minister actually appeared first: Margaret Thatcher: The Downing Street Years, published by Harper & Row in 1993. Thatcher begins here with the election of 1979, describing how she was summoned to Buckingham Palace, met with the Queen, asked to form a government. Again, one hears Thatcher’s voice, such as when she writes that “no theory of government was ever given a fairer test or a more prolonged experiment in a democratic country than democratic socialism received in Britain. Yet it was a miserable failure in every respect.”

But, what if one wants a book about Thatcher and not by her? One possibility is Hugo Young’s book: The Iron Lady: A Biography of Margaret Thatcher, published by Farrar Straus Giroux in 1989. Young was a British political reporter and his book has many useful quotations from other politicians, such as the one who told Young (in 1978) that Thatcher’s “view of the world is distressingly narrow. She regards the working class as idle, deceitful, inferior and bloody-minded.” This book is now out of print, although used copies are available on Amazon and Alibris.

More recent is John Campbell’s book: The Iron Lady: From Grocer’s Daughter to Prime Minister, published by Penguin in 2011. It is available (for some reason) only in an abridged form and only in paperback or electronic form. A quick reading of a few pages, however, shows that it is interesting and readable. Campbell notes, for example, that the Thatcher family shop was also a post office. “This is something which the iconography of Thatcherism tends to overlook; yet it subtly changes the picture of Alfred [Thatcher’s father] as the archetypal small businessman and champion of private industry.”

One other book should be mentioned: the first volume of the authorized biography of Thatcher will appear in the UK just after Thatcher’s funeral. The promotional material for Charles Moore’s new book, Margaret Thatcher: Not for Turning, claims that it “immediately supersedes all earlier books written about her,” in part because Moore was the first author with access to “her extensive correspondence with her sister.”

Walter Stahr is a Washington lawyer and the author of John Jay: Founding Father (2005) and Seward: Lincoln’s Indispensable Man (2012).

We asked the author of Mrs. Queen Takes The Train to tell us about the books on his gift list.