Beyond The Book in Popular Culture 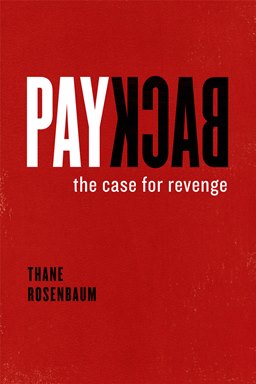 Payback: The Case for Revenge
by Thane Rosenbaum
University of Chicago Press
314 pp.

The notion that revenge is sweet is not just a metaphor for novelist, essayist and law professor Thane Rosenbaum; it is a “scientific fact.” In Payback: The Case for Revenge, we learn that consuming chocolate and witnessing justified acts of vengeance “register similar levels of neural satisfaction in the human brain.” Said to be part of “human nature,” the instinct for revenge “has always been with us, a partner in our evolutionary history, a mainstay of our DNA.” The book offers an impressive array of scientific and cultural evidence to support this claim. It also seasons its narrative with many entertaining accounts of revenge fiction in ancient and modern times, ranging from Aeschylus’ tragedy Eumenides to Clint Eastwood’s “Unforgiven” (1992). This is all designed to show that the taste for payback is “hardwired into the human brain,” and that it cannot and should not be suppressed by political elites who misguidedly seek to make it “go the way of the dinosaurs.”

Modern American society attempts to sublimate the instinct for revenge by channeling its expression into the legal system. Government institutions send a powerful message to individuals: they should rely on the police to protect them and the courts to remedy whatever wrongs are done to them, and they should never take the law into their own hands. The law advertises that public retribution for criminal wrongdoing is rational, just and good at deterring future crime, whereas private revenge is irrational, unjust and dangerously anarchic.

Payback squarely rejects the moral hierarchy on which these social messages are based. Like many other advocates of the so-called “victim’s rights movement,” Rosenbaum believes that our criminal justice system treats crime victims unjustly. Victims and their families have a justifiably strong emotional need to take revenge against those who have hurt them, he avers, while the law’s dry and impersonal procedures wrongly extract all emotion from the courtroom, thereby denying agency to victims and victimizing them all over again.

The book takes care to distinguish “good” revenge, which always operates according to the law of proportionality between offense and punishment (the lex talionis, or “an eye for an eye”), from “bad” revenge, which, by unreasonably exceeding this measure (e.g., “an eye for an eyelash”), can produce a socially dangerous cycle of revenge and counter-revenge. Despite certain passages that seem to praise particular historical instances of vigilantism, it is clear that the book seeks not to abolish but to reform the legal system — not to increase the incidence of private vengeance in society, but rather to give the desire for revenge a much greater voice in the law.

“What we have now is morally intolerable,” Rosenbaum writes. “Far too many victims walk away from legal proceedings embittered. Few leave ennobled or vindicated.” The recommended remedy for this moral failure is to “replicate the emotional experience of revenge” in the courtroom. Payback would accomplish this by such measures as giving victims the right to participate in pretrial proceedings, the right to be consulted about (and perhaps even to veto) proposed plea bargains, and the right to act as “true parties to criminal proceedings, serving in the role of co-prosecutors.”

Rosenbaum acknowledges but gives little weight to a number of legal doctrines that have been designed to suppress the instinct for revenge in the justice system by making the process of finding guilt and assessing punishment a distinctly unemotional affair. The presumption of innocence, due process, equal protection, and the Fourth, Fifth, Sixth and Eighth Amendments to the U.S. Constitution, for example, are meant to protect people accused of crime from overreaching by the state, including especially a state that rushes in to take advantage of vengeful popular opinion. In protecting the accused from politicians and prosecutors attempting to curry favor with mobs, these legal principles express a visceral instinct (fear of collective violence) that is no less a part of our “human nature” than the instinct for revenge. By omitting films such as “To Kill a Mockingbird” (1962) and “Judge Horton and the Scottsboro Boys” (1976) from its impressive survey of revenge movies, the book understates the extent to which a legal system is capable of giving too much voice to the primal instinct of revenge. Including these sorts of movies would also have illustrated another, less flattering dimension of revenge. Although the human instinct for revenge is probably universal in an abstract sense, it is also true that vengeance can be triggered by offenses to social norms that appear grossly unjust in hindsight, if not at the time (e.g., the maintenance of strict racial hierarchies in the South during the 1930s).

The book’s review of revenge films also fails to mention such movie classics as “The Ox-Bow Incident” (1943) and “Mystic River” (2003), in which the instinct for righteous revenge goes terribly wrong. Moreover, notably missing from its survey of ancient Greek drama is Sophocles’ Oedipus Rex, in which terrible unintended consequences occur precisely because the protagonist acted correctly, by Greek standards, to avenge his honor against an obnoxious “stranger” who turned out to be his own father.

Payback’s failure to discuss any examples of revenge art that show the downside of vengeance is highly significant. It indicates that the book is less concerned with illuminating all sides of the complex dynamic of revenge than it is with uncovering the inadequacies of our legal system as seen from the unique standpoint of disgruntled crime victims.

In common with many sociobiological arguments that attempt to draw lessons for the law from evolutionary tendencies, Payback elides the logical distinction between is and ought, fact and value, in the service of a distinctly normative agenda. Logically speaking, even if a taste for revenge is a powerful product of human evolution, this fact alone does not imply that we ought to design our legal institutions around it, any more than we should feel an obligation to increase our consumption of candy just because a preference for sugary foods can also be attributed to human evolution. This book seems to interpret the ubiquity and popularity of artistic depictions of revenge as symptoms of something gone terribly wrong in our legal system, as if Hollywood entrepreneurs had to step in to supply us with gobs of virtual payback because the government has failed to satisfy our craving for the real thing. But surely another interpretation is equally, if not more, plausible. A functional interpretation — traceable to Aristotle’s theory of catharsis and Freud’s theory of sublimation — would hold that artistic portrayals of vengeance in popular culture allow socially unacceptable impulses to be transformed into socially acceptable forms by allowing people to let off emotional steam in movie theaters so they will not be tempted to act vengefully in the streets and in the courtrooms.

Read as a political polemic — and it is as a polemic that this book works best — Payback will appeal most to readers who believe that there is too little of what Nietzsche called ressentiment in the world: too little anger against those who have wronged us, too little hatred and outrage against evildoers, and too little righteous punishment of bad people. In advancing his agenda, Rosenbaum seems to theologize the instinct for revenge almost as much as St. Thomas Aquinas did when he wrote that the saints in heaven enjoy the blissfulness of paradise all the more because they are able to witness the eternal torments of the damned in hell. On the other hand, the book is unlikely to convince readers who do not already share the author’s creed to change their minds. To the contrary: those who believe that there is almost always something profoundly tragic about both crime and punishment will find that the book challenges their sensibilities to the sort of intellectual fistfight that only the truly vengeful are interested in winning once and for all.

Louis Wolcher is a law professor at the University of Washington School of Law in Seattle. He has given lectures on the relationship between law and justice at numerous venues around the world, and has published scores of articles and two books on the philosophy of law and legal theory, including Law’s Task: The Tragic Circle of Law, Justice and Human Suffering (Ashgate 2008). He is currently working on a book that examines the uneasy relationship between justice and individual ethical responsibility.

Variations on a Theme - Politics: Q&A with Daniel K. Williams

God’s Own Party: The Making of the Christian Right traces the evolution of the movement in American politics and examines the influential role the Christian Right has played in the nation’s culture wars. Enlightening for readers of any political persuasion, this book may leave some left-leaning thinkers to ask: “Might the right be on to something?”