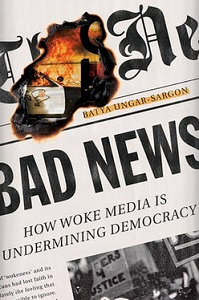 I’ve written before about how the rise of fake news pains me as a lifelong, and still practicing, journalist. But things have only gotten worse since that 2018 article, and bias reigns supreme in what used to a profession that at least viewed objectivity as a touchstone for what constitutes good journalism.

Don’t take my word for it. I’m not talking about Sarah Palin’s “lamestream media” or Sean Hannity’s “mainstream mob.” You expect right-wing critics to lament a largely left-leaning media. It is criticism from the left that is most telling.

The most penetrating analysis of the current deplorable state of mainstream media comes from leftist Batya Ungar-Sargon, deputy opinion editor of Newsweek and former opinion editor at the Jewish magazine Forward.

Her new book, Bad News: How Woke Media Is Undermining Democracy, goes beyond bemoaning fake news to describe how journalists, who used to practice a trade that agitated for the working man, have now become part of the elite and how their worldview reflects that.

For Ungar-Sargon, the current polarization in America is not due to politics or racism, but reflects a class struggle based on economics as a well-paid media cadre sides with prosperous fellow citizens harboring the same disdain for the inhabitants of flyover country, especially those who have not gone to college. Partisan and racial divisions are highlighted in mainstream media as a “smoke screen” for this division by class.

“For the racial moral panic obscures the real divide separating America into two groups: It is not a political or racial divide but an economic and cultural one, a giant and ever-growing chasm separating the college educated from those they disdain,” Ungar-Sargon writes.

President Donald Trump presented the perfect foil for drawing this bias out into the open. Trump, for all his flaws, identified an economic gap and exploited it. Paradoxically, the mainstream media fed off Trump’s disruptive behavior. Media distracted readers and viewers from this class division by accusing Trump voters — including large blocs of minorities and many who had voted for Barack Obama — of racism.

“If Trump’s voters were motivated by racism, we no longer have to care about them!” Ungar-Sargon writes. “It completely absolves journalists of the inner twinge of doubt that must come to any honest reporter when they realize that they are afflicting the afflicted. There is only one problem with this story: It’s just not true.”

Ungar-Sargon is not alone in her criticism of mainstream media. A number of prominent left-wing journalists have abandoned establishment media to sell their own brand of journalism via Substack or some other individualized platform.

Glenn Greenwald, a former lawyer, rocketed to journalistic fame with his stories for the Guardian and Washington Post about surveillance programs disclosed in leaked classified documents from Edward Snowden. He went on to co-found the Intercept but left when that publication began to censor his stories about disclosures regarding Joe Biden’s relations to China and Ukraine.

Greenwald launched his Substack page with the article about Biden that, he claimed, the Intercept insisted editors would have to “completely gut” before it could be published.

Matt Taibbi, a longtime writer for Rolling Stone, famously described investment bank Goldman Sachs as “a great vampire squid wrapped around the face of humanity,” and was hailed as the quintessential liberal journalist. He eventually left Rolling Stone and launched TK News on Substack. In June 2020, he published a piece there called “The American Press Is Destroying Itself.”

“It feels liberating to say after years of tiptoeing around the fact,” he writes, “but the American left has lost its mind. It’s become a cowardly mob of upper-class social media addicts, Twitter Robespierres who move from discipline to discipline torching reputations and jobs with breathtaking casualness.” He was just getting started.

Ungar-Sargon blames the rise of digital media for exacerbating bias as corporations chase clicks and cater to “their” readers. I can only repeat what I wrote in the fake-news commentary in 2018: “Neither you nor I can correct this. The only solution for news consumers is to get out of your comfort zone and read or listen to news from media you don’t agree with.”

An Ode to Satire

The tonic against tragedy.