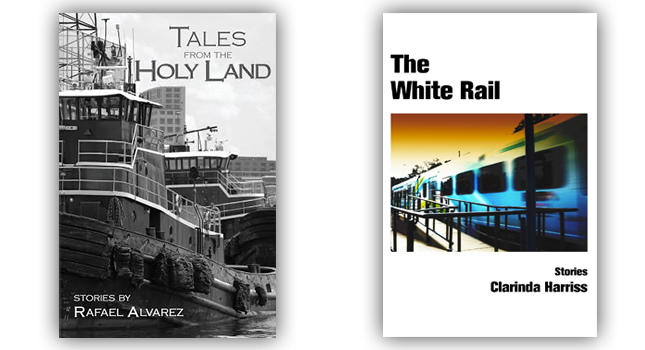 All writing is a dialogue, as the late Iain Banks put it, but it’s especially fun to imagine authors Rafael Alvarez and Clarinda Harriss meeting for drinks and hashing things out in a Baltimore bar (though probably not one in the Inner Harbor). Both writers share a fascination with their city’s residents, how people use language, and the random social encounters that cut across ethnicity and class.

Yet there’s much to distinguish their two short-story collections. Alvarez, a veteran reporter for the Baltimore Sun and erstwhile writer for The Wire and other TV shows, loves the curve of history. Harriss, former chair of the English department at Towson University, has had poems appear in Poetry and Prairie Schooner. Still, it’s oversimplifying to say that Harriss’ characters trend toward the literary and bohemian while Alvarez’s lean toward unionists and blue-collar families. In fact, their demographics overlap.

Reading these two collections together gives the impression of a dance, each stepping into the other’s world for a turn, then back. Harriss’ book, The White Rail, the more slender of the two, packs a stinging punch from opening story “The Vinegar Drinker” to its brilliant closer, “In the House.” The latter combines prison-lit poetry, email messages from Emily Dickinson, and the surprising turns a mentoring relationship can take.

Harriss also works her poetry skills to good effect in unexpected structures; some of her stories move more like stanzas than prose. But the plot turns in “In the House” rival most procedurals, and the story finishes with a quatrain that delivers. Along the way it includes an essay about Dickinson by the prison poet, which his mentor posts on a faculty bulletin board. The prisoner’s essay begins:

Miss Emily rhymes like rap sometimes. The words sound pretty much alike and go good together but they do not always look or sound all that much the same if you say them outside the poem. I like all those Dashes and Capital Letters. They are her idea and would not have helped her get her GED, trust me I know.

Harriss is freer from landmarks and history than Alvarez, and she invents with sureness and style. “Hot Water Piggy Blues” paints a tense, syncopated relationship in a hot tub between a poet and her fiancé and the homeless guy who jumps out from behind the boxwood bush one October night. The pace and language are almost akin to Richard Brautigan here, but the story proceeds through arguments, remonstrations, and character turns that startle but emerge organically. It ends with a haunting hint of violent self-reproach.

“Bone to Bone” invokes, the author notes, a real-life episode recounted by the late Lucille Clifton, once Maryland’s poet laureate, and unfolds a literary detective story of identity.

Harriss delivers many sentences that stay with you. “Vinyl Recliner” opens with one of the best lines I’ve read recently: “Right up till Ted Kaczynski’s arrest, just about all the people I know believed the Unabomber was somebody they used to date.”

Tales from the Holy Land is Alvarez’s third collection of stories and carries a striking blurb from National Book Award-winning author James McBride: “These are Americans we rarely hear about, told by a gifted native son, who can point to the place in the Chesapeake Bay where his father worked a harbor tug.” McBride goes on to praise Alvarez’s “poetic deftness, tight dialogue, burning descriptive passages…”

The book includes an introduction by Afaa Michael Weaver that waxes poetic about Baltimore as a “city of confluences and contradictions and the richness that comes from those intersections,” noting its past as the East Coast’s second-largest intake port for immigrants and the tidbit that the Patapsco River’s name comes from Algonquin for “backwater” or “tide covered with froth.”

Some of the characters and stories in the new book appeared in his earlier volumes. The first, “Aboard the Miss Agnes,” set aboard a tugboat of that name in Baltimore harbor with a triangle of characters, could easily be adapted to a one-hour drama, yet it sprawls to encompass a history of the harbor from the days of sail and the World War I-era Crabtown neighborhood: “Polack stevedores, deckhands, line handlers, busias running boarding houses.” The story also knows where Jethro Tull would have played in July 1977.

“The Aishe Cooper Story” starts as a crime tale involving the death of a girl and the guy, Orlo Pound, who finds her one night in 1926. Alvarez invests Orlo’s story with a magical realist sweep and destiny from the colonial shipyard to the 1960s.

With similar scope but within a lifetime, “Junie Bug” starts with a challenge to any reader who thinks they know Baltimore. Readers may find the title character’s rush from the news of his father’s death through the woods a bit purple (“When Junie crossed that threshold it began an ignorant kid’s lifelong campaign to find a father he believed might only be hurt…”), but the story introduces characters worth knowing and a search that ends in surprise.

Some stories center in the 1970s and 80s and flash forward in time. Within the collection, characters reappear, especially the young painter Basilio. The operatic “Fountain of Highlandtown [1989]” gives a Joycean sweep to Basilio’s rendezvous with a young doctor he just met. It, too, plays with conventional story structure.

Their date follows a winding route through alleys to a snowball stand and a hike up the little-known Ruth Tower (including the plaque at its base with the Babe’s quote: “Let the poor kids in free and name it after me.”). When Katherine the doctor suspects Basilio is a fraud, she points to the Johns Hopkins Hospital dome and says, “And over there is where I fish bullets out of fourteen-year-old boys on Saturday nights just like this.” It’s a story of romance and family, and yet it is not sweet.

Adopting their characters’ opinionated attitude, I want to champion one of these books as victorious, but that doesn’t feel right. Maybe the authors should arm wrestle for the prize at that hypothetical happy hour. Loser buys. But in both books you will find a loving tribute to language and the lives of people beyond any literary world, and the city that makes them collide.

David A. Taylor’s fiction has appeared in the anthologies Stress City and Eclectica’s Best
Fiction, and in Potomac Review,
Jabberwock, Barrelhouse, Washington City Paper, Rio Grande Review, and the
Baltimore Review. His collection Success: Stories received the Washington Writers’ Publishing
House fiction prize and was a People’s Choice finalist in the Library of
Virginia Literary Awards. His nonfiction book


Soul of a People (2009), about the WPA writers of the 1930s, was
ranked among the Best of the Month by Amazon.com and the year’s best books by
the Pittsburgh Post-Gazette. It was made into a Smithsonian documentary film
that Taylor wrote and co-produced. His nonfiction also includes


Ginseng,
the Divine Root (2006), a plant’s odyssey, and The War of 1812
and the Rise of the U.S. Navy (2012), co-authored with Mark Collins
Jenkins for National Geographic Books. He contributes to the Washington Post,
teaches at the Writer’s Center, and lives in DC.