An Ode to Joy (and Pain)

A new collection rejects the subjugation of Black bodies. 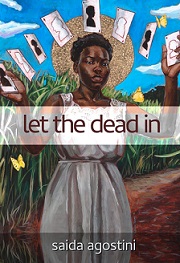 For those compelled to ponder how the past molds the experiences of the present, the powerful language of Saida Agostini’s first full-length collection of poetry, let the dead in, not only offers the opportunity to see and hear people’s interactions in her world, but to smell, taste, and feel their joy and pain. Readers unfamiliar with this sphere will likely find Agostini’s words and imagery resonating within themselves — recalling their own experiences and emotions.

The collection, a finalist for the 2020 New Issues Poetry Prize and the Center for African American Arts & Poetics Poetry Prize, is divided into three parts: “notes on archiving erasure,” “we find the fantastic,” and “american love.” The first begins the story in Guyana, where past generations tell their stories of young love at first sight, of brutal treatment of women at the hands of men — whether husbands or lovers — and of children hungry and wailing for their absent daddies.

We also experience the environment where these people live and work and suffer — such as the sugarcane fields where they toil, the rivers of “dark cool moving waters,” and the homes where the families exist — with or without love.

But, most of all, this section introduces us to the power of women — full of passionate love or jealousy; suffering but surviving — role models to be emulated or not. The author also affords us an initial look at the fantastical world of spirits and demons, such as the Jumbees. The general belief is that a person who has been evil in life will remain evil in death and continue to exert his or her power over the living.

The second part further introduces readers to the creatures of this world, including the ole higue, a myth created by Dutch enslavers in Guyana of a hunchbacked old woman “said to depart her skin at night and beguile young women into killing their families.” Ironically, such spirits provide an emotional outlet for women betrayed or abandoned by their men. Others, such as the moongazer — a bloodthirsty monster created to stop slaves from stealing sugarcane from the fields after dark — inspired Agostini to transform this horrific mythology into a glorious dream of being reunited with a deceased lover:

“…what I have done
to find my darling; look at her
crowned by nothing but the stars
in this bowl of sky. Her dark hands lifted
soft and warm, my gaze
a patient delight. Look at her
there beyond the moon…”

Also in this section is a sequence of six poems introducing us to a man who may serve as a symbol for many men in this culture. He is known as chickenfoot, “all sinew and black amble.” He offers romantic passion to women but will cause them great heartbreak. Chickenfoot also loves his granny and weeps for a man he adores and can never touch. In his macho environment, such feelings cannot be tolerated. Here, Agostini demonstrates that pain is often a universal constant for children, women, and men.

The third part of the collection features the ironic title “american love,” for here we are reminded of past and present examples of Black men and women who have been killed by police, used or abused by those with greater power, or convicted of killing their abusers. Agostini’s poems in this section cover multiple locations and span decades, even centuries.

Some of the names — Freddie Gray or Eric Garner — may be familiar. Others, such as Recy Taylor, hark back to 1944. In “Bresha Meadows Speaks on Divinity,” Agostini offers these words on the resilience of children beaten by their parents: “god is a black girl in love with living, a sacrament on how to be disbelieved, forgotten and rise a thousand times over.”

While her poems appear to be about one subject, Agostini often uses them to express an entirely different emotion. She writes “whoever died from a rough ride” as a gentle meditation for her love of Baltimore in all its complexities — her memory of the feel of her mother parting her hair on Sunday with a purple fine-toothed comb; to a stranger seeing Agostini weeping and placing his hand on her shoulder to express concern for her welfare; to viewing the falling houses behind her, whose bones chant, “we won’t leave we won’t leave.”

At the same time, some of the brutal experiences she has endured recur in multiple poems. Agostini finds grace, however, in the collection’s penultimate poem, “who we are human to,” as demonstrated by her closing words:

“we are nothing if not houses to each other that can hold
all sorts of brutal tender memory, make rooms of flesh
and light where we bear witness to the most horrible
rock each other in our arms and whisper yes yes
I know”

Readers willing to journey with Saida Agostini will find their path full of conflicting emotions and painful choices which must be made. In return, the reward offered is one of richer insight and greater empathy for those whose lives she has illuminated.

Edgar Farr Russell III is a fine artist, writer, director, and performer. His art was selected for the Joslyn Art Museum’s Biennial XX. His plays have been produced for NPR, the stage, and television. Russell produced and reconstructed the lost 1938 Orson Welles’ Mercury Theatre On the Air production of Julius Caesar. This new presentation featured members of Welles’ original Broadway cast. Russell has performed at the Library of Congress and the Kennedy Center. A lifelong enthusiast of Abraham Lincoln, he served as president of the Lincoln Group of DC, as well as president of the Washington, DC, chapter of the National Society of Arts and Letters. His most recent poem was published in November as part of the anthology We Were Not Alone, which features a foreword by singer/songwriter Jewel.