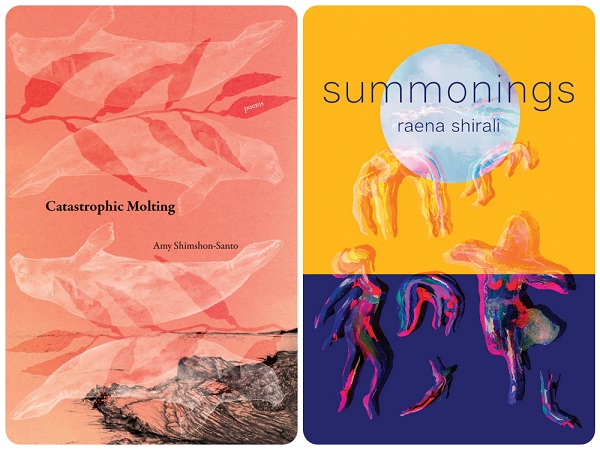 Transformation in all its permutations seems to be this October’s lesson, from the powerful solar-eclipse new moon we all experienced on the 25th to the two collections in this roundup. I’m also working my way through my first bout of covid, which is transformational in that I must morph my entire being toward radical acceptance that I cannot, and will not, be able to do many of the things I consider normal for weeks, possibly months, to come.

Maybe that’s why I can’t stop thinking about the title of Amy Shimshon-Santo’s third collection, Catastrophic Molting (FlowerSong Press). I’m in the act of catastrophic molting myself, shedding a skin I’d protected for the entirety of the pandemic until now, when I’m forced to finally process the once-hovering fear of me and my child being infected. If you have a child in school, you know that covid and a host of other nasty respiratory viruses have overtaken your life. I am right there with you.

It makes me wonder what kinds of poems will come from me now that my very cells have been invaded, what door is closing behind me, what lessons I am to take from the reality that my version of catastrophe has arrived like a thief in the night to clean out my once-safe house.

As Raena Shirali’s second collection, summonings (Black Lawrence Press), shows so deftly, sometimes all it takes is a breath or a word from one person to alter — or end — the life of another, to be thrown into catastrophe. Misinformation, lies, superstitions, and intolerance in the name of capital/labor/land acquisition all lay beneath any witch hunt, literal or figurative, historic or modern.

What lies have we taken in about our own bodies, our capitalist culture, and our healthcare establishment? When no one has a safety net, calamity sits so much closer to the surface, a power that may transform your life. Yet, as Shimshon-Santo notes via her epigraph, a quote by Thich Nhat Hanh: “If we are not capable of transforming the pain within ourselves, happiness would not be possible…If we learn to take good care of our suffering, we can help others do the same.”

Shimshon-Santo opens Catastrophic Molting with a poem that’s both prayer and benediction, blessing the poet and the reader with the understanding that we are all in the process of becoming ancestors and must not only remember that, but must learn how to be a good ancestor. In the defiantly titled “declaration,” she writes, “I declare myself a living being,/aware and evolving,/prepared to face the ugliness with a warrior’s mindset,/imbued with the strength of health and wisdom.”

Health of the body, of a society, of an ecosystem and its slow decay and deconstruction are explored in the first section, a series of erasures “written for the virus [covid] from pages in Ben Okri’s novel The Famished Road.” Folded within, as with the pandemic itself, is a long poem, “And Still, We Are Trying — To Dream,” which centers a Middle-Eastern American mother’s fear for her Black children amidst the revolutionary pandemonium of the George Floyd protests, capturing all the messy dichotomies of a profound, definitive moment in our lifetimes:

is
the sickest
place
on earth

and
here
we are

Hope is always the supporting understructure in Shimshon-Santo’s collection, and she puts forth a vision for a kinder future, even as she viscerally, methodically interrogates her own whiteness and fears and the patriarchal violence built into our country’s (and the Western world’s) foundations in poems like “Shades of White,” “July 4,” and “The Future of Music.” As she writes in “New Moon in Cancer”:

“let us dream again, or for the very first time
as if the winds wanted it so, and were on our side
as if today was now, and we were able”

If Shimshon-Santo’s collection centers an erasure, Shirali’s summonings centers an un-erasure and a powerful witnessing through art. Using bracketed language from anthropological research across the collection, she examines the current real-life, deadly witch hunts on tea plantations in West Bengal, India, where holy men (Ojhas) play a pivotal role in accusing women of being Daayans (witches, or “potential keepers of evil spirits”), as well as in enabling the misogynist violence that has earned Shirali’s homeland the distinction of being the world’s most dangerous place for women. (The United States ranks third.)

This is a striking and important book for many reasons; the poems are evocative and incisive, their imagery, form, and subjects dark and profound. But it’s the stories of the accused woven throughout — and Shirali’s care in illustrating life on and around the plantations, where women are considered superior tea-pickers yet devalued as laborers — that force readers to look at the cup of tea sitting in front of them and really think about where, and how, it came to be.

In Braiding Sweetgrass, botanist and member of the Citizen Potawatomi Nation Robin Wall Kimmerer talks about the Indigenous concept of the “Honorable Harvest,” and of attempting to practice that concept (as an experiment) in a modern mall. But although she can envision and feel the products sitting on shelves and hanging on racks, she simply cannot connect with them in such an environment.

Shirali, for her part, intentionally brings the reader into the fields to see the tea harvest and how the environment, capitalism, and toxic patriarchal/religious culture churn out a “natural” product nonetheless stained with the blood of countless women. She writes about that commodification and disconnect, as well as about her own liminality as an immigrant, in “summoning: chai & failure”: “I am foreign & so/nothing has ever made sense. i’m domestic/& so expected to understand. i let chai steep/for hours on the counter, forget the milk/& don’t own sugar, & the cup tastes of bitter/rain & sheared rock.”

Another theme Shirali works with is how religion in India, which so many Westerners hold up as sacred and mystical in an appropriative — and inappropriate — way, paves the way for men’s divine right to oppress, rape, and murder girls and women. Turning the dark/divine/feminine on its head in the poem “the universe will end & kali will still be here,” she writes:

“o goddess of lust
& violence, i tire of trying to find peace.

i want to unleash. to unearth

rage. kali, we lived & our bodies were
trespassed. release us from this cage.”