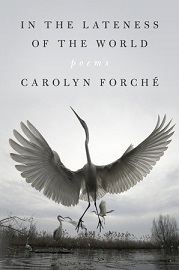 During this global pandemic, many have noticed that the air seems clearer, the birdsong louder, the colors more vibrant. It’s as if nature is saying it will thrive in spite of our darkest struggles. It’s an apt metaphor, I think, for the poetry of Carolyn Forché.

The title of her new collection, In the Lateness of the World, comes from “Poetry, a Natural Thing” by Robert Duncan, which speaks to the impulse giving rise to poetry:

This beauty is an inner persistence
toward the source
striving against (within) down-rushet of the river,
a call we heard and answer
in the lateness of the world

But there’s another persistence in her poetry, and that is the imperative as a human-rights activist to speak for those who cry from the soul in extremity, at times of persecution.

Up until a month ago, I was spending a lot of time with Carolyn, helping organize her library and archives. The last time we saw each other was in mid-March, when she talked to me at length about her new collection.

“I think the book coheres around journeys, migration, exile, loss,” she said. “And it’s written in an elegiac mode not only for individuals for whom I wrote elegies in the aftermath of their deaths, but also for the world.”

She is interested in history in people and in the wider world, although these particular poems were written in the aftermath of personal loss: a cancer diagnosis and a flood that almost destroyed her home.

“I think the poems I wrote in the aftermath of that destruction were tonally different than the poems I'd written before,” she said.

“Something very beautiful happened to me several hours after I was diagnosed. This peace flooded over me suddenly. I felt very calm and very accepting, and also I realized what life was. I realized what time was. And I had these sudden illuminations. I think the book reflects some of the consciousness of that time.”

There’s a lot of water in these new poems, and there are many crossings — over rivers, bridges, and open seas. “The Crossing” speaks about Anna, who:

crossed, as a girl my age, in the hold of a ship for weeks, lowering
her bucket of night soil by rope, then, from the sea-rinsed bucket pouring
seawater over herself on the lower deck where bathing was permitted.
The salt stiffened her hair and burned her eyes, but she was clean.

“That’s my grandmother Anna,” Carolyn said. “I got this story from her eldest daughter, who is also now dead — also named Anna. At the age of almost 100, she sat and talked to me about everything she knew about her mother, and her mother had, of course, come to the United States in the 1800s on one of these ships.”

Many poems address others, and several are written to fellow poets. In “Exile,” for Ilya Kaminsky, she writes: “If you return now, it will not be as a being visible to others, and when you walk past, it will not be as if a man had passed, but rather as if someone had remembered something long forgotten and wondered why.”

“Fisherman” concerns exile, too, and is also written for Kaminsky. In it, an ice fisherman floats on a patch of ice as the Neva thaws around him.

“Once one goes into exile, one lives with exile regardless of how beautifully one adapts to the new country, as Ilya has, or the new language, the new being. You are born again when you come into exile,” she said.

“Ilya has talked to me a great deal about exile, and what I have learned from him is that it is an irrevocable state. He will always be on the bridge between Ukraine and the United States.”

Daniel Simko, who translated Georg Trakl and his book Autumn Sonata, is another poet she addresses. He was her best friend for many years. “But he never thought his poetry was ready for publication. He was reticent; he wanted to revise more,” Carolyn said. “So his friends and I had to assemble his manuscript and publish it posthumously.”

She and Simko once took a trip together to the former Czechoslovakia, where both of their families originated. “Daniel and I had taken another journey in the early spring of 1990, after the Velvet Revolution in Czechoslovakia,” she recalled.

“Daniel came from the same town as my family, and we decided to go back to Slovakia by way of the bridge that crosses from Vienna to Bratislava. I was going to find my great-aunt, who was still alive, and Daniel was going to find his books and jazz records that were left in an attic in Bratislava.”

Her poem “Last Bridge” describes this experience. It’s addressed to a woman in Simko’s life and includes a story from his childhood. When the Warsaw Pact invaded Czechoslovakia in 1968, Simko and some friends — they were about 11 years old — turned the street signs around so that the Soviet military would get lost.

“Elegy to an Unknown Poet” is about Simko translating Trakl, and “The Lost Suitcase” concerns a bag of books lost at the beginning of their trip. “After he died, I wrote about that suitcase, and the suitcase became larger because it became a speculation on what the suitcase, in a larger sense, contained. And it’s an elegy.”

One of the most memorable poems in the collection is “The Boatman,” written in the voice of a taxi driver who once steered a boat of refugees escaping Aleppo. It begins:

We were thirty-one souls all, he said, on the gray-sick of sea
In a cold rubber boat, rising and falling in our filth.
By morning this didn’t matter, no land was in sight,
All were soaked to the bone, living and dead.

The poem comes from a series of conversations she had with a cab driver in Milwaukee. “He kept picking me up randomly,” she told me. “It was always snowing when we were talking, and after he brought me to the hotel where I was staying, we’d just sit there with the engine running, talking, talking, talking. Eventually, everything came out. And on our last trip together, he said, ‘I hope you will write this.’”

Carolyn Forché is a poet of witness, bearing witness to the experience of others, but she rarely writes about herself. Even her memoir, What You Have Heard Is True, is primarily about Leonel Gómez Vides, the human-rights activist who took her to El Salvador.

Two poems in the book are written for him. They are hard to read and hard to shake. "I know that I write in a culture in the United States where how people feel — and what they personally think and feel — is very important. I understand that I’m swimming against a current there. I really [am] from an earlier time where people weren’t quite that eager to share personal material.

“I feel very protective of my intimate life,” she explained. “It’s not for the world. But I hope that enough of me comes through with the language. I feel I am trying to write into the world.”