An Interview with Tom Pollock 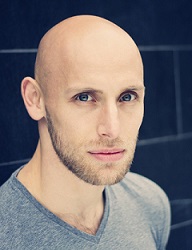 This Story Is a Lie is ostensibly a YA novel that readers of all ages who like speculative thrillers will enjoy. The book is a step away from author Tom Pollock’s previous work — mostly urban fantasy — and focuses on Peter Blankman, a 17-year-old math genius who suffers from crippling anxiety. His twin sister, Bel, is his unofficial bodyguard as he is the frequent target for bullies. When their mother, a well-regarded neuroscientist, is violently attacked, Pete plunges into a world of dark secrets, crime, and espionage.

What drew you to write a “mind-screw” thriller?

There’s a short answer to this and a long one. The short answer is: I really enjoy them. I find a punchy, twisty, expectation-inverting structure a really satisfying one, both in novels and other media. The longer answer is: It emerged out of the story’s fundamentals. The first thing I knew about the book was that the protagonist would have a severe anxiety disorder. That’s a condition I live with personally (although not to the same degree as Pete), and I wanted to write about it.

The next thing I knew was that it would be a spy story since (a) I love spy stories, and (b) the atmosphere of paranoia you get in spy novels dovetailed nicely with the anxiety theme. The final side of the triangle was that Pete would be a mathematician, since math intersects with spies around codes, and with anxiety around control. All three of those central themes pointed towards a twisty book.

Writing about mental health naturally makes me ask questions about the reliability of memory and experience; spy novels around trust and double-crosses; and the math put the cap on it, since Godel’s Incompleteness Theorem — the central bit of math in the book — is really all about the fundamental untrustworthiness of what ought to be the most certain thing in the world: the structure that says 2+2=4.

How much of yourself is in Pete?

A lot, to be fair. I tend to think that there’s always a lot of writers in every character they write. Fiction is an exercise in creating an illusion that you’re writing through the eyes of other people, but ultimately the only experience you can draw on is your own. To make that concrete: Let’s say I’m not afraid of heights, but I want to write a character who is. I can do that. I can put that character at the top of the Sears Tower and make them afraid. But the way I write about that character feeling fear will be the way I feel it, because it’s the only experience of it I’ve got.

Even with that said, Pete has a lot of me in him. He experiences anxiety and panic attacks the way I experience them. When his thoughts and his movements spiral out of control, that’s how I experience them. He also has (at least a version of) my sense of humor.

Now, that’s not to say he’s a direct authorial insert. A lot of it’s a leap into the imaginative dark. For example: Not only am I not (tragically) a once-in-a-generation mathematical prodigy, I also don’t seek to quantify the world the way Pete does. I don’t look at everything and work out the mathematics of it.

What draws you to write for young adults?

I guess I should say first I feel like I write about young adults, but I write for anyone who wants to read the books. A lot of adults (including me) love reading Harry Potter and The Hunger Games, and many young adults (again, including me!) love reading Beloved and The Stand.

That said, I am drawn to writing about young adults. I love writing about people who are setting out in the world (which feels like something I am constantly doing), who are working out how much they can free themselves from the way they were brought up, and are discovering their own power to shape the world for the first time. Also, a lot of my formative experiences as a person happened between the ages of 13 and 18, so that probably has something to do with it.

I’ve noticed that your fiction has a thematic preoccupation with gender roles. It comes out in This Story Is a Lie with Pete being “weak” and Bel being more predatory. What is your interest in challenging gender norms?

I’d contest the read of Pete as “weak.” I feel like the book is partly about a boy who is remarkably strong, for all his societal markers of weakness. As to your wider point on gender, though, for me, it all comes from a place of wanting to write fully fleshed, three-dimensional characters. I want my people to be people, to be complex and surprising and contradictory the way real people are. I usually find writing away from stereotypes, including gender stereotypes, creates more space in which to do that.

Bel’s predatory qualities stem from a deep and abiding fury. And while that may not be a way we stereotypically think of girls, a lot of women I know are extremely, justifiably angry at the way society circumscribes their choices, degrades them, and tells them to smile while they take it. In effect, they’re told to repress their anger (the way that boys are often taught to repress all other emotions), and one of the themes of both the book and my experience is that the more you try to repress an emotion, the more power you give it over yourself.

The novel (brilliantly) opens with Pete in the midst of an eating disorder. You’ve been incredibly brave about your own struggles with eating disorders. Are you aware of the #ownvoices movement in fiction?

Thanks! Yes, I am aware of #ownvoices, and I know that the treatment of anxiety disorders in This Story Is a Lie has been called #ownvoices [representative]. If you want me to talk about #ownvoices more generally, I want to recognize that it’s complex, and I am not expert in all those complexities. That said, the following propositions are pretty clear to me:

[Editor’s note: Click here to read the Independent’s review of This Story Is a Lie.]

Craig Laurance Gidney is the author of the collections Sea, Swallow Me & Other Stories, Skin Deep Magic, Bereft, and The Nectar of Nightmares. His forthcoming novel, A Spectral Hue, will be published in 2019. He lives in his native Washington, DC. Find him on Instagram, Tumblr, and Twitter at @ethereallad.

An Interview with Patrick J. Crocker

The emergency-medicine physician talks healthcare, staying calm during crises, and Letters from the Pit.