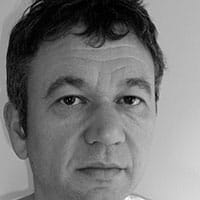 By the mid-1970s, one in every 50 albums sold worldwide had Elton John’s name on it. From a music nerd playing sentimental dreck in local pubs, to wearing a sequined baseball uniform before sellout crowds at Dodger Stadium in 1975, Elton, born Reginald Dwight, came to epitomize the wild, sexually ambiguous, druggy rock ‘n’ roll excesses of the era.

His commercial run is extraordinary. Classics include “Your Song,” “Daniel,” and “Bennie and the Jets,” among 16 top-10 1970s singles in America — more than any sold by any musician of the decade.

After chronicling another pop superstar in Man on the Run: Paul McCartney in the 1970s, noted rock journalist Tom Doyle is back with Captain Fantastic: Elton John’s Stellar Trip Through the ‘70s. We spoke recently.

There really are two people there. There's Reginald Dwight, who's this sort of chubby, bashful music obsessive. He transforms himself into Elton John. But really, you know, in my mind at least, Reg was never far away.

When I met Elton when I was doing the interviews, which turned out to be this book, sometimes he would be very shy. And I thought, well, it's Reg. And then sometimes he would be really what you would expect him to be, sort of flamboyant, really a great storyteller, very comfortable when he's talking about meeting John Lennon or meeting Groucho Marx. And you think, whoa, this is Elton. It was a difficult journey for him through the '60s, because he did want to be a singer and songwriter and a front man. But because of his sort of slightly chubby appearance, and stuff like that, it was difficult. I mean, people around him would laugh at him when he said that he wanted to be a star.

Then he met his lyricist, Bernie Taupin. Their meeting, if it were in a movie, would almost seem too corny to believe.

They both answered this advert for Liberty Records that was placed in the [New Musical Express]. Reg, who was pre-Elton at this point, was struggling, playing in these sort of supper clubs up in the north of England, you know, while people eat chicken in the basket and stuff. So, he was kind of a lost soul. And Bernie was very young at the time, just in his late teens, and he had been writing lyrics, which were really poetry. I mean, he was imagining them as songs, but he had no musical ability whatsoever. So, he answers this advert as well.

Now, what happens is the guy who put the advert in basically looks at Elton [dismisses his attempts at lyrics] and says, "Well, listen, I've got all these lyrics on my desk from this guy in Lincolnshire." So, before they'd met, they'd written 20 songs together.

Then they meet one another and there's instantly this connection. But this sort of remote writing arrangement that had been put in place by Liberty Records was one that they kept on with. Apart from one or two instances, they were never in the same room together [when writing songs].

You talk about Elton’s wild ride in the 70s with his drug use, the frantic pace, and the struggle with sexual ambiguity.

Well, it's interesting because Elton signed a record contract which was two albums a year plus tours. So, you've got this thing where he's having to churn them out and really what happens to him is he becomes much better than I think he ever imagined.

So, he's on this kind of, it's a rocket, right? He's holding on for dear life [but he had steered clear] of drugs. It wasn't until they'd be started recording in the Caribou Ranch [circa 1974] in the Colorado Rockies that really Elton…there's a story in the book where he's walking past a table at the back of the studio one day and he sees this thing and he says, "What is that?" And he suspects it's a line of cocaine, and his manager tells him it is a line of cocaine.

He decides to take a little sniff. It's one of those things that I think he, for various reasons, I think he wanted to stop being a goodie-goodie and be part of the gang, hang with the band, be a bit more rock ‘n’ roll.

And, obviously, this drug has the effect of making him chatty, confident, you know it sort of fills in all the holes in his personality. He had been shy and reticent. And so, it works for him for a while. The downside of it really came in the '80s when he got really, really heavily into cocaine and became a drug addict.

[The 1970s were a] funny time for music really. It's the glam rock era. They're all wearing make-up, they've all got their mom's blouses. Elton takes it farther than most of them.

In '76, a Rolling Stone reporter asks him about the rumors which had been circulating for a long time because obviously, Elton has never been seen to be in a relationship publicly. Elton tells me in the book, "The reporter had said to me, ‘Look, we'll turn the tape machine off’" and Elton said, "I knew what was coming." And so, he admits to bisexuality here, but that is enough really for his conservative audience to turn their backs on him. He said, "Oh, the radio stations got upset and stuff like that and some people burned my records." He said, "But it was a small price to pay for the freedom that it bought me."

In the book, you point out that 1975’s Captain Fantastic and the Brown Dirt Cowboy was autobiographical. Talk a little bit about the hit, “Someone Saved My Life Tonight.” That's about Elton trying to force himself to marry a woman.

Yeah, about trying to force a woman not to marry him, in a way. It was in the late '60s, he had met this girl and, the way he says and the people around him say, that he felt that he was being railroaded into marriage. So, there was obviously some denial about what was going on there in terms of his sexuality. I think he always wanted to be a family man, he always wanted to have kids and stuff, so I think he felt as if this was incompatible with the feelings that he had in terms of his sexuality.

He tried to gas himself in an oven, but he opens the oven, turns it to low and leaves the windows open. So this isn't somebody who's really that serious about wanting to do it. But, anyway, he puts his head in this oven and then Bernie, who was sharing the flat with him, with Elton and his fiancée, comes in and discovers Elton and pulls his head out of the oven. The song came out of that experience.

What are some of your favorite Elton songs?

There's loads I love. I think “Rocket Man.” You hear that, I was in a bar in Brooklyn months ago, and I heard it come on, it's just one of those songs the atmosphere is so eerie and the melody is so beautiful. My favorite album is Captain Fantastic and the Brown Dirt Cowboy just because it ties together in a great way and it's quite a Beatle-esque record. For people who would be looking to go into the darker corners of his catalog, there's a lot of great stuff from Honky Chateau. I really love Tumbleweed Connection.

I suppose it's one of those things that going back to the records, and particularly Elton's '70s era, there still was some [great] stuff in there, even stuff that he hates. I remember him saying that there was this one track on Caribou, “I've Seen the Saucers,” which he said was terrible. But it's an amazing track.

That's one of my favorites.

Nobody really remembers that track. Hopefully that's what the book does now, that's when I feel really proud, when somebody says to me, "I love the book and it sent me back to the records."

Michael Causey is co-host of Get Up!, a Monday-morning program on 94.3 FM and takomaradio.org. He has about a hundred favorite Elton John songs.

Carolyn See of the Washington Post said, “Everyone in the world should read this book.” She is absolutely right.