An Interview with Tim Wendel

The novelist talks Havana, baseball, and which player enjoys God's view of the game. 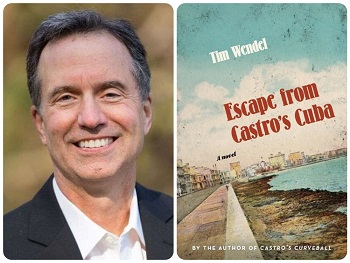 It's been more than 20 years between innings, but Escape from Castro’s Cuba, Tim Wendel's sequel to his novel Castro's Curveball, is finally up at bat. And to beat a metaphorical dead horse just a bit more, Wendel has hit this book — his 14th — out of the park.

Okay, that's all of the baseball jokes I have. Which is just fine. You don't have to be a major-league fan to fully immerse yourself in Wendel's story of Billy Bryan, a former player who returns to his old Havana stomping grounds for a role in a bigtime Hollywood movie. While seated in the stands waiting to deliver his big line, Billy notices a rookie shortstop named Gabriel Santos and is soon transfixed by Santos' talent. So mesmerized that he blows the line.

It doesn't take long for Billy's daughter to track down the shortstop and learn of his dream to play ball in the United States. What follows is a story of payback — for the death of the woman Billy loved — set against the backdrop of a post-Castro Havana, a place that both Billy and Wendel clearly love.

Escape from Castro’s Cuba is a sequel to your 1999 novel, Castro’s Curveball. Why two decades between them?

In early 2017, I took my wife to Cuba for her first visit to the island. It was my fourth trip. As we came off the plane in Havana, a Cuban guy came alongside me and introduced himself as Ricky, and I simply nodded in return. I didn’t tell him my name, and we hadn’t cleared customs yet. Then Ricky asked, “What brings you back to Cuba, Señor Wendel?” We had been on the island for maybe five minutes and they already knew we were there. That was an incredible trip, as we met old-time revolutionaries, newfound entrepreneurs, ballplayers, and artists — all of them determined to have a hand in the new Cuba. Frankly, I thought I was finished writing about the island, but that trip got me to thinking what would happen if Billy Bryan, the hero of Castro’s Curveball, returned to Havana in this time period. What if he was cast in a movie being filmed in Havana? From there, I was off.

You’ve also written several nonfiction books about baseball — High Heat, Down to the Last Pitch, and Summer of ’68 — and numerous articles about it. Where does your interest in it come from?

The game helped me keep my bearings as a teenager. My brother Eric battled leukemia for much of that time, and my family found ways to cope. We sailed together on Lake Ontario, and my brothers and I played hockey and baseball. Years later, when I was working for the San Francisco Examiner, I fell into being the “swing” man on the baseball desk. That meant I covered the San Francisco Giants and Oakland Athletics. You couldn’t find two more different yet successful teams at the time. The Giants were managed by the easygoing Roger Craig and had such stars as Chili Davis, Matt Williams, and Will Clark, while the A’s were led by the intense Tony La Russa, with Rickey Henderson, Dennis Eckersley, Jose Canseco, and Mark McGwire making headlines. That experience served me well when I became one of the founders of USA Today Baseball Weekly in 1991. That led to my first trip to Cuba, where I covered an exhibition series between the U.S. Olympic squad and Team Cuba.

Is it harder to write fiction or nonfiction?

I sure struggle with both forms at times. I certainly wasn’t a natural writer, which my teachers in high school and then in college at Syracuse University and later at Johns Hopkins University would tell you. But few things give me as much satisfaction as writing well, or at least attempting to do so. And what I now stress with my students is how the tools of narrative — character, setting, sequencing, etc. — can work whether you’re writing fiction or nonfiction.

Your protagonist, Billy Bryan, is a former minor-league catcher. Why did you feel that position — as opposed to, say, pitcher or an outfielder — was the right one for this character?

Catchers, especially old-timers, talk about enjoying God’s view of the game when they are behind the plate. What they’re referring to is [how] everything plays out in front of you, sometimes in vivid, compelling scenes. As a result, catchers need to be students of the game. Some of them go on to become coaches and managers. Also, with wearing extra gear, foul tips hitting them, being the middleman between the pitcher and the manager, they arguably carry more of a burden than other position players. Students of the game? Suffering the game’s slings and arrows? Those are some of the qualities of Billy Bryan.

For many, Cuba still seems like a place mired in its past. How did you go about bringing it to life in your book?

I made four trips to Cuba between 1991 and 2017, and it’s a place that got under my skin early on. I love walking the streets of Havana, especially at dawn or dusk. That’s when you can imagine how beautiful it once was. The place was called “the city of columns” by the writer Alejo Carpentier, meaning these ornate, majestic pillars in the old part of town can shield what is happening on the sidewalk from the view of those in a passing car or out in the street. And vice versa. As a result, Havana’s very architecture can lead to intrigue, even different interpretations of the same event. Here, African, Spanish, and Anglo cultures converge and often clash.

Former Major League pitcher Luis Tiant blurbed your book. What does his praise mean to you?

Growing up, I was a big fan of El Tiante. That windup, the flair with which he played, his success in big games. And my admiration only grew as I learned about his upbringing in Cuba, how he followed in his father’s footsteps to play the game and then had to leave the island to pursue his dream of starring in the U.S. major leagues. To have him recognize this story set in his homeland? Well, it means the world to me. Then you put him alongside the others who have also endorsed the book — Daniel Silva and Jane Leavy. Now, that’s an all-star lineup.