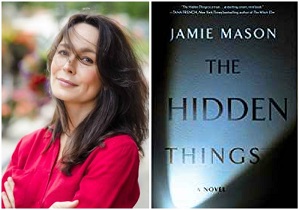 A teenage girl, walking into her house late at night, successfully fends off an attack from a would-be assailant. Her heroics are captured on film and quickly become a viral sensation on social media.

But there’s a catch. The filming took place inside the house. And the girl (and her mother) had no idea that her stepfather had placed a camera there. And he has his own reasons for not telling them.

This premise, which happens to be the captivating opening of Jamie Mason’s newest novel, The Hidden Things, lends itself to the examination of a number of different themes — privacy, secrecy, violence. In the hands of a lesser writer, only one of those issues would be explored. But fans of Mason’s previous work (Three Graves Full, Monday’s Lie) know to expect more from her novels, and they won’t be disappointed.

Mason combines taut action with an intense character study and hauntingly memorable prose, as in this excerpt:

“Carly’s face went wide and she looked into the thousand-yard distance, listening to the two of them. The match struck and went into the tinder. The argument burst into flames while Carly sorted out how different her mother’s unfiltered, uncalculated upset sounded from her stepfather’s precision in answering her.”

Mason knows not to rush a reader, but you can’t help but read The Hidden Things in a hurry. The characters and tension compel you all the way to the unexpected, but appropriate, end. I loved the novel and was excited to ask Mason about her latest work, her thoughts on privacy, and her concept of art within The Hidden Things.

One of the things I admired most about The Hidden Things is the prose. How long did it take you to write this book, and how many drafts did you go through?

That's a wonderful compliment and it means so much to me. Thank you. I wrote it over the course of 18 months, but it's kind of hard to say how many drafts it took, because I write and revise together as I go. By the time I get to THE END, it's pretty close to how it will be when it gets turned in.

That's not to say I don't do several polishing passes after that first crossing of the finish line. I do. And also again after the editorial input and revisions. I run through the whole manuscript probably at least six times after I've gotten to THE END the first time. It's my favorite part of the whole process, really.

If you had to pick, what's the most important element to you when it comes to writing? Is it the prose, the characters, the plot? And does that change when you switch from being a writer to a reader?

That's a tough one, because it kind of has to be the plot, the story of it. The characters are fascinating to invent, but they seem to come from the question: What kinds of people would find themselves in this mess? And, of course, there's no prose if there's no story and no characters to populate that story.

But, for me, the prose is the most satisfying thing in writing. What I love best about the work is the sound of the words in my head. English is so bizarre and specific and fun to play with. There's a kind of music in word-stacking. I love it.

When I read, though, it's prose first. I'll read anything if it makes a good sound in my head.

There's such a varied ensemble of characters and voices in The Hidden Things. Which of the characters was the most natural to write, and which was the most difficult to capture?

I have to say that Owen was super fun to write. I took any generic bad mood I might have and let it off the chain with an IV drip of steroids. It was interesting to imagine being constantly irritated-to-angry, analytical, purposely holding delight at arm's length. Owen is scary, but his armor is full of holes.

Carly and Marcelline made sense to me. I love them, weaknesses and all. It was a pleasure to think them up. Roy was just a vessel of so much that I find tragic. So, he was sad to write, but not hard.

The most difficult was Jonathan, because he's truly an awful person, but his affection for Carly and Donna is genuine. It was a challenge and kind of illuminating to really confront a thing that is so obviously true in life — even terrible people have genuinely positive feelings mixed in with their selfishness and disregard and willingness to hurt other people.

To try to separate it out is messy and probably futile. We're all impossible braids of everything that we're made of. So, my feeling is that we end up being judged, and rightly so, by the balance at the bottom line. How much good did you put in? How much evil? Do that math and, at the sum, you've got the answer of if you were worth the breath and skin you were gifted.

The book opens with a foiled attack that quickly goes viral on social media, and I loved your examination of how that sudden fame affects Carly — but there's also the subtext of privacy, given that the attack was filmed inside her house. That sense of privacy and secrecy is something that plays through all the characters in various ways. What are your thoughts on privacy today, particularly as it pertains to social media? Is it something we're losing, and is there a chance that full privacy will be a forgotten notion in the future?

I think privacy is something we don't quite understand, but we think we do. Informational privacy is one thing, and it's important. But more general, performative privacy, the state of being "out there" for everyone to see and evaluate, that's a little harder to pin down.

Privacy protects us when we are unprepared to be seen. And people can feel that way for all kinds of reasons, righteous or un. But as much as we demand privacy and think of it as a right, however ill-defined, we can get capricious with it. We want to fiddle with the dials and scale it back on a whim in times of craving attention or connection or safety. It's unclear to me if the general worry over the encroaching loss of privacy is warranted or not. To that end, I think technology and social media are fascinating.

Another element of the book that I thought was interesting was the concept of art's value, and how differently art is viewed by each of the characters — either as possession, as treasure, or knowledge. Did you intentionally set those different measures up as something you wanted to explore, or was it something that came organically?

That's really interesting. And it makes sense that it's in there. I didn't have that particularly in mind, but growing up poor in the Washington, DC, area with the art and artifact treasures of the world available for free for anyone's enjoyment in the Smithsonian is foundational to my personality. It's not a surprise that it surfaces in things I make up.

These objects are solid, sensory-drenching proof that the world is wonderful and that people are amazing. They are reminders that everything isn't bad. So the spectrum of value — from decorative to informative to historical to next-level currency and status yardstick — is deep water. It gives life to a lot of what-ifs.

A haunting element through The Hidden Things is the sense of desperation. All of the characters have urgent concerns, and each attends to that urgency in different, defining ways. This is an odd question, but did any of the characters disappoint you in their responses? Their choices are believable but, at times, heartbreaking, and I wonder if you ever wanted to change their decisions at the risk of potentially weakening the strength of the novel.

Ha! No. My characters never disappoint me. I know many writers experience their creations as almost separate entities from themselves, driving with their own set of controls. It doesn't feel that way to me. If what I have them do feels as if it makes sense for them in their personal paradigms within the universe of the story, I'm happy with it.

You were born in Oklahoma, grew up in the DC area, and now live in North Carolina. Have those different environments affected your writing in ways you can see?

Not really. I moved around a lot when I was young, so my world was infinitely portable. It had to be. So, I'm well-practiced at being unanchored from way before I started writing. The feeling of being at home affects my writing, but I'm home wherever I can find some quiet. And if it's quiet and I have an idea, then I can write.