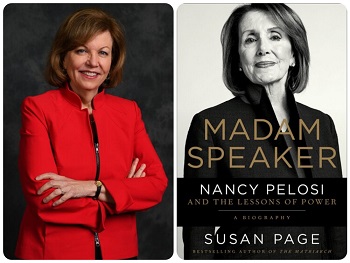 Susan Page, Washington bureau chief for USA Today, has covered 11 presidential elections and interviewed 10 presidents. She appears regularly with Brian Williams on MSNBC and moderated the 2020 vice presidential debate between Mike Pence and Kamala Harris. Page has won several awards for her journalism, including the Merriman Smith Award and the Gerald R. Ford Prize for Distinguished Reporting on the President. Her first book was The Matriarch: Barbara Bush and the Making of an American Dynasty, and now she’s just written her second, Madam Speaker: Nancy Pelosi and the Lessons of Power.

Nancy Pelosi has been speaker of the House two times: 2007-2011 and again 2019 to the present. She’s indicated she’ll give up her gavel in 2022. Difficult to see her stepping down from the pinnacle of power to simply represent the 12th District of San Francisco, although she’s dean of the California delegation, having served in Congress since 1987. Do you see President Biden appointing her to be U.S. ambassador to Italy or the Holy See?

I do think this is likely to be Nancy Pelosi’s valedictory term in Congress. She indicated this would be her last term in the leadership when there was a challenge to her re-election as speaker after the 2018 elections.

You quote many Democratic reps and senators on the record saying positive things about the speaker. Considering we’re all God’s children, with a mixture of mischief and mayhem, do you feel you got to the essence of Pelosi, personally and professionally?

She’s a tough interview. She’s disciplined and guarded, when what an interviewer craves is someone who is exactly the opposite. But she became more candid and more open as I did more interviews with her (10 in all).

The speaker’s deep Catholic faith resonates throughout your book, but there’s not much evidence of humor. Is Pelosi all politics and no play?

Nancy Pelosi is close to her nine grandchildren, with whom she has relationships that can be whimsical. In the family chat, she’ll text heart emojis that can make them roll their eyes. When she was 76 years old, she took two grandsons to a Metallica concert. Pelosi and heavy metal: That’s a side to her that folks in Washington haven’t seen.

From your book, we see Pelosi demanding deference from Rep. Alexandria Ocasio Cortez following tweeted insults at the speaker from AOC’s administrative assistant. Soon after AOC met with the speaker, that assistant left AOC’s staff. Describe the current dynamic between the 80-year-old speaker and her 31-year-old colleague from the Bronx. Do you see any similarities between the two?

Pelosi told me that she sees similarities, especially with the younger Nancy Pelosi, who was demonstrating for single-payer healthcare and complaining about the compromises elected officials made to get half a loaf. Both women are smart and strategic, tough, and comfortable being disruptive. But there are big differences between them: Pelosi [today] is one of those elected officials who argues that getting half a loaf is better than none.

Do you think Pelosi’s corrosive relationship with President Trump disadvantaged Democrats and/or any legislation during the four years of Trump’s term?

One big example: A covid relief bill that was endlessly negotiated in 2020 and never enacted. It then passed soon after President Biden was inaugurated. She says she was holding out on principle. Even some Democrats complained that a deal could have been struck [earlier], and Republicans said she just didn’t want to give President Trump the political benefits of passage during [the campaign].

How did you get Newt Gingrich to endorse your book with the “advance praise” cited on the back cover? He praises Pelosi as “a professional…and a pirate.”

My secret strategy: I sent him the galleys.

Another Pelosi biography (Pelosi by Molly Ball) published last year described how President Obama refused to entertain Pelosi’s request to appear at her 25th-anniversary celebration. Did you interview Obama for this book about the woman who gave him his biggest legislative accomplishment by getting the Affordable Care Act passed?

I did have the opportunity to interview President Obama…[He and Pelosi] are bound in history. The Affordable Care Act, the biggest expansion of healthcare since Medicare and Medicaid, wouldn’t have passed without both Obama in the Oval Office and Pelosi in the speaker’s chair. He acknowledged that, even though the two sometimes clashed.

You mention the feud between Pelosi and former Rep. Jane Harman (D-Ca.), who, you write, felt that Pelosi was settling a personal score by denying Harman chairmanship of the House Intelligence Committee in 2011. What was the “personal score” that caused the rift between the two women, both Democrats from California?

That’s the subject of a lot of speculation. Some think it was policy; Harman was more hawkish on national security issues than Pelosi was. Some think it was personal, that they just didn’t get along. Whatever the truth, it delivered an unmistakable message to other House Democrats about the potential perils of being at odds with Nancy Pelosi.

From the public record, readers know about the strained relations between Pelosi and House Majority Leader Steny Hoyer (D-Md.). Have they ironed out their push-pull differences?

I detail the long and sometimes bitter campaign between [them] for Democratic whip — an insider campaign that lasted three years, involved millions of dollars in campaign contributions, and put Pelosi on the path to becoming speaker. This was a legislative battle waged largely behind the scenes that political scientists described as “titanic” and “unprecedented.”

Please relate your own experience with the speaker, which you describe in your book as “the full Pelosi” — that sent you home to recover over a glass or two of wine.

The Pelosi treatment! In my ninth interview…I was asking about an episode that she didn’t think warranted being in the book. I explained why I thought it did. She explained why she thought it didn’t. She never raised her voice, and she didn’t threaten me. But she somehow seemed to get taller than her five-five height, and her questions were so probing and pressing that I could feel the sweat popping on my forehead. In the end, I didn’t relent, and neither did she. But it gave me a better understanding of what it must be like to be a member of Congress she’s lobbying to vote for or against a bill.

Pelosi seems to have it all — a fabulous marriage, great children, loving grandkids, and good health, all while holding a world-shaking gavel. What’s her secret?

Success in the two worlds — personal and professional — may not be so different. Pelosi says that running a household of five children was the best possible training for running a House of disparate pols. You have to impose order amid chaos. Convince people to do what you want them to do, ideally by persuading them it was their idea. Deal with grievances, real and imagined. Forge alliances that are constantly shifting.

An Interview with Tom Pollock