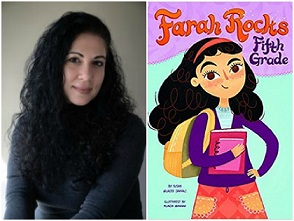 Susan Muaddi Darraj is an award-winning writer, editor, and professor of English. Her previous work includes the 2014 collection A Curious Land: Stories from Home, which won the AWP Grace Paley Prize for Short Fiction, and 2007’s The Inheritance of Exile. Recently, she has shifted gears to focus on middle-grade fiction. Her newest book is Farah Rocks Fifth Grade, which came out last month. Susan graciously agreed to speak with me about her new series, the importance of authentic storytelling, and the differences between writing for adults and children.

Congratulations on Farah Rocks Fifth Grade! My 10-year-old loved this book (as did I). What made you decide to write a middle-grade book after writing for adults all this time?

Thank you so much. That makes me so happy to hear! My own daughter inspired me to write the book. She's an avid reader, and she wondered aloud why it was so hard to find books with Arab-American girls in them. It was a casual question, but it reminded me that I'd felt the same way at her age. So I pursued the topic with her, and she asked me to write her a story with such a girl. I did, and I actually liked it — I read so many children's novels, both to myself and aloud to my kids, that I latched rather quickly onto how to tell a story to this age group. I liked the final result, and so did my daughter. Book series for middle-grade readers are so popular, and I thought it could be a series, so upon the advice of my agent, I wrote a sequel. And that's how Farah was born.

How was writing this book different, in terms of your process as a writer?

I remember thinking, as I wrote it, that I had to get right to the heart of the story more quickly. My scenes had to include more action and less reflection. I based this on my own reading of early chapter books and middle-grade literature, although, as I learned from my editor later, I also had to make sure to spend time reflecting on and communicating Farah's inner thoughts. Action is great, but it cannot come at the cost of developing the richness of Farah's character. Other than that, the process was the same. I wrote the first draft, as I always do, by hand, on legal pads. The second version was created as I typed the manuscript into my laptop, making changes and edits along the way.

We hear about #OwnVoices a lot in the literary world, but it doesn’t really sink in for many readers until we hear the authors themselves talk about their own lives. Why is it so important to read books by authors who have the same lived experiences as their characters?

I'm not saying it's impossible for a person to write about a character from another culture or background, but…there are so many cases where it's been poorly done. And here's the thing: It's not just that now there's one more poorly written book in the world. It's that there is a book that is actually harmful to the kids from that community who are reading it. I'm so tired of reading exoticized versions of Arab culture, or retellings of Arab lives that are really just modernized versions of Disney's “Aladdin.”

Farah is an exciting character who explores her world through a lens we often don't read about in children's literature. What other children’s stories would you like to see written by #OwnVoices authors?

Many people who write books for children of color focus on crisis stories, narratives that depict a tragic past. #OwnVoices writers know that those stories are important, of course, but we also know something else: Our kids need to read books in which characters who look like them are engaged in everyday life — going to school, dealing with siblings, etc.

Back to Farah…was she inspired by someone you know?

She's a composite of all the wonderful little Arab girls I know...in my family, my own daughter, my nieces.

I love the way you write children’s voices, the care you take to make Farah’s thoughts and dialogue feel authentic. What is your secret to writing in a child’s voice?

I remember reading Judy Blume's work and thinking, "Wow, she is so honest." She wasn't talking down to her readers the way some adults do. She also didn't hide or water down information for her readers. I'm trying to do the same thing. For example, Farah's parents are on the brink of poverty, and, basically, Farah thinks that stinks. She resents the fact that Christmas in her parents' house is not a grand affair and that other kids have more privileges than she does. She expresses those feelings candidly, and I hope my readers will appreciate her honesty and authenticity.

What’s coming up in the Farah series?

Farah Rocks Summer Break is out in July. It's the second book. Farah wants to attend an exclusive summer camp, but it's incredibly expensive. Her parents can't afford it, and so she's determined to find a way to pay for it herself.

Who are some children’s authors you love to read?

[Editor’s note: Susan Muaddi Darraj will speak at this year’s Washington Writers Conference on May 8-9 in North Bethesda, MD. Click here to register!]