An Interview with Susan Coll 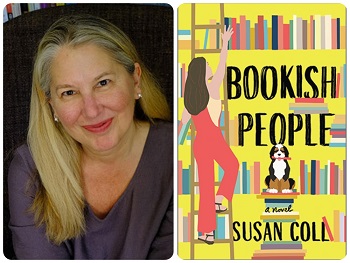 In Susan Coll’s latest novel, Bookish People, indie-bookstore owner Sophie Bernstein’s problems keep piling up. Between her husband dying, her beloved manager leaving, and her ne’er-do-well son continuously disappointing her, she can’t seem to catch a break. When riots break out in Charlottesville, Virginia, Sophie begins to feel like her whole world is in a tailspin.

All she wants is to slip away to a hidden room in the store — the one behind the shelf with all the Graham Greene. But as in real life, nothing goes as planned. What follows is a zany, comedic read from an author who was herself the longtime events and programs director at famed Washington, DC, independent bookstore Politics and Prose.

Tell us how this book came about.

I had no intention of writing a novel set in a bookstore. Then, I took a lengthy leave of absence [from Politics and Prose]. During that time, I still received the store’s internal emails. These included the “end of day” reports — that was actually the original working title of the book. I read the emails from a certain distance since I was not personally caught up with the daily flow of things. I began to view these memos more as works of literature.

There are two characters — other than the books Sophie is surrounded by — that are not human: A turtle named Kurt Vonnegut and a vacuum cleaner. Is the turtle a metaphor for Sophie, who just wants to retreat into the hidden room? And why a vacuum?

Turtles do want to pull their heads back in. The tortoise was inspired in part by a real tortoise named David Foster Wallace, who was owned by my stepdaughter’s college roommate. For the book, I thought Kurt Vonnegut seemed like a good name for a tortoise. In the “end of day” reports, the vacuum cleaner was mentioned a lot because it was frequently broken. There were descriptions of how to get it to work (“kick it a few times to get it to go”), or just information such as [that] it was back in the shop with a broken belt. A lot of my work comes from epiphanies, and that was one. This vacuum cleaner was speaking to me, and it was telling me it’s got to be a character.

I like Sophie’s character arc. She evolves from being a bit crusty and unapproachable to her staff to rather hopeful by the end, when she’s at an eclipse-viewing party with her employees.

I struggled with her character a bit as I wrote. I didn’t mean for her to be a dark and cold and demanding boss, but it was who she had turned into. I had to show that wasn’t who she really was but who she had become after her husband’s death. She’d had a rough year. She was weary. She’d become distant and no longer invited people to her home for dinner, and she thought she didn’t want to be a bookstore owner anymore. She changed back to whom she means to be at the end. Yet it was a challenge to write the very end of the book. I wanted it to end on a hopeful note, but politically, it was a hard moment [in which] to write that scene. Things were not and are not necessarily looking up. It’s hard to write a happy, “life will improve” ending because it’s not clear if it will or not.

Clemi is one of the novel’s hopeful characters. You have a strong sense of what the young, slightly unreliable bookstore workers struggle with. Most want to be writers, find love, and earn a living.

Some of that insight comes from a function of my own experience working at the bookstore. I first worked there in my mid-50s but was doing a job similar to — if not the same as — Clemi’s job. A lot of my colleagues were her age, and I felt it was easy to channel that for me. Even though Sophie Bernstein was more my sensibility, I understood both characters.

All the time. It’s not just because of my Politics and Prose job. I also teach a year-long novel class. Many people approach me with book ideas, [questions about] how to find agents, and for advice on how to publish their books.

What is your writing process? Do you outline or make it up as you go?

I don’t outline; I wish I could. It would be more efficient and save me a lot of revisions and headaches and despair. But I get an idea and figure it out on the page as I go along. I am doing this with my next book. Sometimes, it takes a year of false starts and doubts, but I know when it’s time to stop and go back and pull new threads. It eventually all comes together.

I’m working on a novel that has to do with the legend of the Moth Man. I am taking it in a different direction than the [2002] movie “The Mothman Prophesies.” The original story comes from a bridge collapse from the late 1960s in Point Pleasant, West Virginia. My book involves a child of the people who died in that collapse.

Therese Droste is a Washington, DC-based writer and member of the Independent’s board of directors. Her work has appeared in the Washington Post, Prevention, Health, Washingtonian, and numerous other publications.