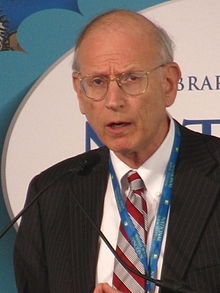 In President Carter: The White House Years, Stuart E. Eizenstat provides plenty of fresh, insider material to help make the case that, far from the ineffectual sanctimonious caricature sometimes found in history books, Jimmy Carter’s presidency was remarkably successful and paved the way for many of Ronald Reagan’s subsequent successes.

As the current Oval Office occupant bullies on Twitter, rants on Fox News, and seems to lie because he can get away with it, perhaps this is the perfect time to reassess a man who, in so many ways, is his polar opposite.

Talk about how you met Jimmy Carter, and what drew you to him.

I had graduated from Harvard Law School in 1967 and then went into the White House to work with President Johnson's staff. When he decided not to run for reelection, my office had been directly next to the Vice President Hubert Humphrey’s office, and I knew his staff, and so they asked me to become the research director for his campaign. When he lost [to Nixon], I went back to Atlanta, which was my hometown, and clerked with a federal judge.

And then a friend from high school just incessantly insisted that I meet Jimmy Carter, who had run unsuccessfully for governor in '66. He’d finished third but made a good impression.

It was a bare-bones office, it had a folding table and two folding metal chairs. And he was wearing work boots and khaki pants. It took me about three minutes to realize this was something very special.

First, he was a very handsome person. But, more important, here is somebody from a small hamlet in southwest Georgia who I thought could bridge the gap between rural, conservative Georgia and the more moderate, liberal Atlanta because he understood urban problems. He talked about the need for fair housing, he talked about supporting rapid transit, he talked about civil rights, and equal rights. I think [our meeting] lasted an hour or so. And then he called me back, just a couple of days later, and said, “I'd like to see you again.” At that second meeting, he said, “Look, I want you to head all of my policy for the campaign.” And that really was the beginning of our relationship.

You worked with Carter so closely. You obviously have a great deal of respect for him. But the book is remarkably even-handed. He had his faults. He had his failures as president.

I felt like if I was going to write this as an insider, the only way it would be taken seriously is to be absolutely credible, authentic, and critical where it was necessary. It tries to be objective and critical. I interviewed 350 people, Republicans and Democrats. People who were favorable and unfavorable. And I based it on 103 legal pads [I had filled] with well over 5,000 pages of [contemporaneous] notes. I think [that’s] the foundation for the accountability and credibility of the book. Michael Beschloss said it had the eye of a historian, but [provided] an insider's account.

It was interesting how you talk about Carter being reminiscent of Harry Truman, one of his favorite presidents. There's been a lot of positive revisionist history about Truman in the last 20-30 years. It sounds like you believe that Carter should be getting that kind of reassessment.

Yes. His political idol was Harry Truman. He placed Truman's favorite slogan on his desk, “The bucks stop here.” Both left the White House wildly unpopular presidents. Truman is now recognized more for his achievements than his faults, and I hope my book will contribute to a similar reassessment of Jimmy Carter as president, not just [as] the most-admired former president. And I believe that, in terms of sheer accomplishments, it's more than any one-term modern president. And, you know, people are surprised that Congress passed almost 70 percent of his proposals, which was only slightly less than LBJ.

I remember there being an inevitability to Reagan winning, and that Carter was doomed, if that's the right way to say it. Would you agree?

No, I really, totally disagree with it. Clearly, he had some very, very heavy burdens. I mean, the combination of Ted Kennedy splitting the party [and] the Iranian Revolution [led] to two separate, devastating things: One was taking already high inflation and sending it into the double-digit stratosphere, when five million barrels of Iranian oil were taken off the market. And then, of course, the hostage crisis.

So, yes, he had those burdens. But even with those burdens, two weeks before the election, he was ahead. [Then] we made a disastrous decision to debate Reagan only a week before the election, which you should never do. And as I document in the book, [it came] from Jim Baker himself, Reagan’s campaign manager, [that] they stole our debate book. They knew exactly what our attack lines were; they had our whole script.

But even with all of that, and even though the debate helped Reagan immensely, the halo effect of that debate had worn off…and the momentum was on our side. What then happened? I was in Chicago with [Carter]. We were at an airport Hilton hotel, and I get a call about 3 o'clock in the morning from the White House operator. The president wants to leave in 45 minutes to go to Washington.

So, I called around. Why are we doing this? He’d gotten another offer from the Iranians for the hostage crisis. Well, I begged him and [press secretary] Jody Powell not to go back. Let's look at the darn thing from Chicago and see if it has any merit. Well, he didn't. He went back, and while it was a step forward, it certainly wasn't sufficient. He could have found that out in a phone call with [National Security Advisor Zbigniew] Brzezinski. It revived the whole Iranian situation. And our polls just went south dramatically as a result.

What do you think would have happened in a second Jimmy Carter term?

First of all, we, not Reagan, would have been the beneficiary of [Federal Reserve Board Chairman] Paul Volcker's tough medicine. And that was really Carter's finest hour, it was his most courageous decision — over the opposition of many of us, because Volcker told him flat-out that if he was appointed, he was going to tighten the money supply, [and] it was going to lead to higher interest rates and more unemployment in the midst of a presidential reelection campaign. And [Carter] did it anyway, because he told us he'd rather lose the election than make high inflation a permanent malady for the country.

I think we would have gotten the first phase of national health insurance, one of the things we split with Kennedy on. He wanted a full-blown, cradle-to-grave, government-run system we couldn't possibly afford with the high inflation we had. We proposed a major first-phase, $18-billion program which covered all children, catastrophic expenses for people, and a major expansion of Medicaid. I think that could have gotten done.

Oh, and he would have had a Supreme Court appointment. And he had told me that he was going to appoint the first woman Supreme Court justice. As it was, he appointed more women, and more African Americans and Hispanics, to judgeships and senior positions — and this is from a Southerner, mind you — than all 38 presidents put together before him. Ruth Bader Ginsberg was asked why she was a judge, and she said, “Jimmy Carter, that's why.”

Ashleigh Andrews Rich interviewed Benjamin Lorr, author of Hell-Bent: Obsession, Pain, and the Search for Something Like Transcendence in Competitive Yoga, which explores the fascinating, often surreal world at the extremes of American yoga.