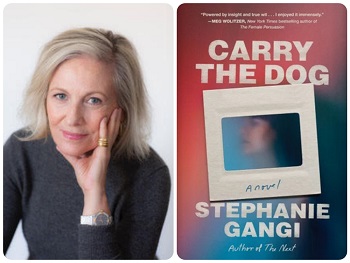 When Stephanie Gangi published her debut novel, The Next, in 2016, she conjured a dead protagonist whose spirit lingers among the living to, among other things, carry out righteous revenge on an unfaithful lover. The challenges that Bea Seger, the main character in Gangi’s second novel, Carry the Dog, faces are perhaps not as pronounced as being dead, but they add up to a lot more baggage.

Bea is a survivor of a complicated childhood, the daughter of acclaimed 1960s photographer Miriam “Miri” Marx, who achieved cult-like fame after showcasing a series of provocative photos known as the Marx Nudes that depicted Bea and her two older brothers in suggestive and disturbing poses.

Decades later, both the Metropolitan Museum of Art and a fast-talking Hollywood film director reach out to Bea about projects involving her late mother, forcing the now 59-year-old woman to come to terms with the explicit images and what she thought she knew about her family.

Where did the title Carry the Dog come from?

It came as a suggestion from one of my agents. I had a list of about 100 titles, and those titles kept falling flat for them. The title which I submitted to my agents was The Upside, and I liked it because it felt contemporary, the overarching theme of what the book was about.

After The Next came out, you published an essay mentioning a medical situation your daughter was going through at the time, which she’d given you permission to do. What happened when you mentioned to her that you were getting a lot of attention for it?

She said to me, “Yeah, tell me about it.” It turns out that when the essay came out, she had gotten some attention from her friends about this thing I wrote. She wasn't mad because she had approved it, but in the actual practical, pragmatic fact of having something out there about you, it's a little different.

In writing Carry the Dog, you researched controversial photographers Diane Arbus and Sally Mann, who frequently featured children — in Mann’s case, her own nude children — in their work. Why?

I asked myself who owns a child’s body, and at what point does that kid become autonomous? What is the art mother’s responsibility, especially if you want to use your children in your art?

You dive deep into Bea’s many relationships, including with her father’s stepdaughter, with her surviving brother, and even with a dog. Yet it’s her inner strength that most comes through, such as when she rides a bicycle through Manhattan while wearing a bright red dress. Is this her way of asserting her freedom while trying to make peace with her past?

Not everybody has the luxury to go to a shrink and work through their trauma. Some people just have to navigate around it, and I really do think that that's what this book is about. Bea is figuring out resilience by herself, and I'm not saying that's right for everybody, but it’s right for this particular character. She doesn’t do it perfectly and continues to be flawed but she's still open. She's still learning and she's still growing.

Your next novel is called The Good Provider. Can you talk a bit about it?

It’s about men and women and money and marriage. About 90 percent of divorce issues are related to money, and I've never really seen a novel about that. I wanted to write about money in the context of marriage. Good men don't start out gaslighting, but many men who are good men gaslight, and I want to explore that.

An Interview with Andrea Pitzer

The journalist talks Icebound, polar bears, and the utter darkness of Arctic nights.