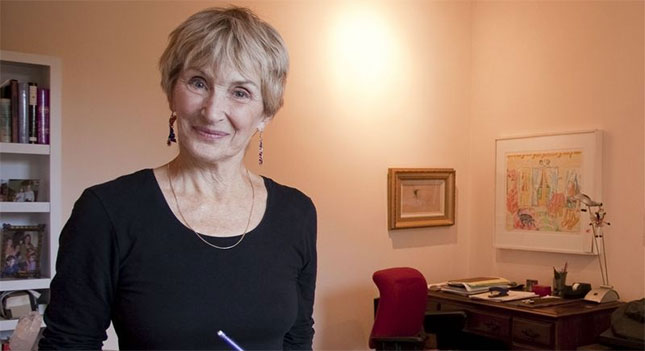 An intuitive and psychic, she has written novels, children’s books, young-adult fiction, multiple magazine articles, and award-winning plays. Three of her books have appeared on The New York Times bestseller list. Active in the Washington, DC, theater community, Burnham worked at the Kennedy Center for the Performing Arts with Broadway producer Roger Stevens and was a founding member of the Studio Theatre. Here she discusses angels, intuition, and the creative process.

How do you define intuition?

That word comes from the Latin tuere, meaning to guard or protect. The word holds within it the implication that there’s something within us that knows more and better for us than we do ourselves, and this “thing” will suddenly give you information without background which may save your life. “There’s a snake in that bush—don’t move,” it says. We call it premonition or insight or psychic abilities. Maybe it’s coming outside of myself. Maybe it’s a grace. Intuition will tell you what, but it will never tell you why. Therefore, it’s easy for reason and logic to override it. For myself, intuition blends into the so-called paranormal. It merges also into the artist’s inspiration. That’s a piece of intuition, too.

There are lots of references in The Art of Intuition to seeing both auras and angels. When did you know you had this ability?

I certainly knew as a child, but I didn’t have words for it. And then, from the time I was in my mid-20s, I began to have many experiences that I talk about in A Book of Angels. Seeing an angel, for example.

What is the difference between a ghost and an angel?

They’re different spiritual entities. The ghost is the spirit of someone who has died. The angel is another species. The ghost walks through you. You’ll feel this cold beyond the cold of the snow. It can be chilling emotionally to see the ghost until you understand what you’re dealing with. The experience of an angel is always of unfathomable love. Light. Warmth. Safety. Of something that adores us and is caring for us. But both of them are aspects of a non-material dimension. It’s a mystery, and I love the fact that I don’t understand it.

Does that keep you more in the investigative mode?

It keeps me more in the wondering and adoring mode. I want to say something about the artist’s inspiration. All artists understand those moments when the muse descends upon you and you come out of this trance and look back at what you’ve created and think: “Where did these words come from?” You can struggle for days, and you would not be able to recreate that moment when you were held in the fire of the muse. It’s true for painters, sculptors, composers, all artists.

Do you think that comes from being connected to another world?

The way I make that connection is by going into silence and meditation and contemplation and prayer. I don’t know any artist who doesn’t have that sense of being carried on this river of inspiration.

Do you think, perhaps, we are telling the story of some spirit that wants its story told?

I think we are. I have on my bulletin board near my desk a postcard of an Italian 14th-century painting. It shows an old man with a white beard. He has a pen and his tablet in front of him. He’s looking at a little child angel who is dictating to him. There are times when I feel I am being dictated to.

How much is related to craft?

Ninety-nine percent. You have to have the craft of the language. To find the words, that’s the craft. That’s the mystical, magical work of angels.

So you think studying and developing the craft is related to the spiritual realm?

Exactly. What we don’t know is whether what we’re connected to is an aspect of ourselves. Or whether it’s in another dimension. Or whether it’s a confusion of both of them. But it will allow your words to leap across centuries and strike the heart of someone not yet born and make them laugh or burst into tears.

In The Art of Intuition, you use the phrase “the luminous quality of the mind.” You say that “it shines on the external world and sees it not as separate from itself but integral.” It seems this is related to the creative process.

That’s a Buddhist phrase. It’s related to the creative process, but it’s also related to certain experiences that I can only think of as deeply spiritual. Just this past summer, I was driving down a road in New Mexico. And all of a sudden, I had this weird impression that there was no outside world, but only myself creating a world that I then imposed as being outside of myself. It was a very powerful experience. It was a projection of some sense of beauty that was interior to me. It’s called satori.

Can you talk about your creative work and what relationship it may have to your inspirational work?

Somehow, I have managed, because of the fiction writing possibly, to find a mode of nonfiction that uses a lot of fictional techniques. But the stories are all true. I’m a storyteller. I love to tell stories. Go back to the Bible, go back to Jesus. He’s telling them parables. He’s telling them stories all the time. That’s how we learn things. I do believe that the highest form of writing is poetry and then maybe children’s book writing. Because you can influence children to change their behavior and to live good lives by the books that they read. [Yet children’s books are] practically impossible to get published. And that’s the thing that I discovered about my fiction. But, nonfiction—the publishers know how to figure out how many books they’re going to sell. They can’t figure that out with fiction.

Do you think people read more nonfiction these days?

Yet everyone goes to the movies. And that’s a form of storytelling.

That’s a form of fiction and storytelling that has an emotional immediacy which I find deeper in books, but I come from that generation that read books and I can use my imagination. I don’t know whether the younger generation will have that freedom to see the story evolve as they are reading words on the page. Because they’re accustomed to different things. I think that books are soon going to be an anachronism.

Recently I’ve been playing with short stories. I’m happy that one was picked up for a 2014 anthology and another won honorable mention in a contest, and that recently I’ve been asked to write for the British Chess Magazine. I’m in a new phase of life. Everything is new and possible.