An Interview with Seymour Hersh

The famed reporter talks bin Laden, My Lai, and how the mainstream media underestimates Trump. 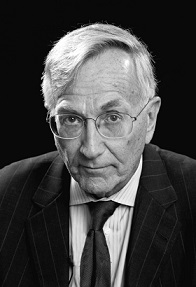 Seymour Hersh won a Pulitzer Prize for his crucial role in revealing the My Lai Massacre, a mass murder of Vietnamese civilians by U.S. troops in South Vietnam in 1968. Never a stranger to controversy, Hersh has been criticized for some of his more recent work, notably 2015’s The Killing of Osama Bin Laden, which challenges the official version of the circumstances surrounding the terrorist’s death.

Undaunted, Hersh doesn’t claim to be above making a mistake here and there, but stands by the broad scope of his muckraking (term used positively) reporting that has influenced the national conversation dozens of times since he emerged decades ago from Chicago’s rough streets.

In his new Reporter: A Memoir, Hersh doesn’t pull punches about himself or the figures he’s covered. We spoke in early June.

In the opening pages of your new book, you talk about the danger of reporters using what you call two dreaded words: "I think." Can you talk a little bit about that?

I came from what I guess you could call the Golden Age, when there was money and there was time to do stories, and there was no competition from the internet or from cable news. Everything's so speeded up today and so herky-jerky, and the mere fact that cable news operates on a 24-hour, got-to-be-fed system makes them so vulnerable to running propaganda and straight-out bull. Trump has mastered this with the tweets. He's figured out exactly what they want. They want to be fed.

I happen to like golf. There's something called the Golf Channel, and I bought it at the beginning 20 years ago, and once a week there was a dopey golf show that [Trump] did. He would play golf with a star, an athlete, a movie star, or a professional golfer. He's not a bad golfer, so either that or he can make it look good. I'd watch it, and then he did “The Apprentice.”

The notion that this guy doesn't know how the media works…He's feeding the machine. One day, he's going to the summit in North Korea. The place quiets down for a while. Then he announces he's not going to, and that keeps it going. I think he feels it doesn't matter if it's good, bad, or otherwise. If he fills the spot, he's ahead of the game. I will tell you, the last couple of months, he's gone up seven or eight points in polls. Seven or eight months [during] which the liberal press in New York and Washington and the liberal cable companies have been going after him like crazy.

I don't know what it tells you, but something is wrong with the equation. We're in trouble if we don't change the way we deal with this guy and maybe give him a little more respect for having a little more idea of what he's doing.

I think a lot of the coverage of Trump today is wrongheaded. It's very hard to say that without people thinking you're supporting Trump, but that's not what I'm doing.

In the sections of your book about My Lai, you show how much true reporting is grunt work. It's not always this dashing thing that movies portray for reporters. But I also appreciated how you talked about how, early on, you knew this was going to be a big story. So many times, I read reporters or historians say, “I had no idea this would be a big deal.”

I was blundering around for a while. But you recognized pretty quickly that you were onto something. Part of me said: fame, fortune, glory. And the other said: This is going to hurt the war effort. [I found records of] Americans speaking about going into villages as machine gunners on tanks and finding nobody and being frustrated because they couldn't find the enemy. Their captain would say to them before they left the village, okay, everyone can have one minute. You can have a one-minute shoot ‘em up. They would just pour bullets into the little straw homes that people lived in.

The tip I got was a GI killed 75 people. And as I got into the story, the horror of the story…these guys went into a village and killed over 500 people that were defenseless. The American soldiers threw babies, infants, into the air and caught them on bayonets. Killed them that way.

It was depressing. It was overwhelming for me at the time, but there was no way I was going to let go of it. It was too important of a story. And it was always important because it was going to show what the war was like. I didn't know how hard it would be [to report and write it]. Nobody wanted the story when I got it. I had to sell it myself through a syndicate.

I was interested in the quick aside you have [in the book] where you wrote about going to see Oliver Stone’s movie “Platoon” with Daniel Ellsberg, and Ellsberg crying during the combat scenes. [Click here to read the Independent’s recent interview with Ellsberg.]

When “Platoon” came out, he hadn't seen it. I had seen it. I took him to it. Oliver Stone has a lot of problems, but he can certainly make a movie. There's an ambush scene where the North Vietnamese were waiting in ambush and the Americans were terrified and got shot at…they were using the Marines to go on patrol, hoping that the enemy would ambush them. Then they could fire napalm and other stuff on the areas.

So, just the notion of an ambush drove him crazy. He was a Marine before he got in [with the Rand Corporation]. He would volunteer to crawl in the tunnels with the American troops when he went there as an advisor. He saw combat. It was very moving to see him cry.

In the memoir, you talk about a couple of your other books where there has been pushback. The bin Laden book is the most recent. Were you surprised by the intensity of the pushback there?

I can live with that, you know. I just wrote what I did. Do I know I'll be right? I know I'll be right in the long run, but so what? I was surprised by the notion, even at the New York Times, that two years later, there's no second story. So, whatever they wrote in the first week is it. That narrow-minded approach was really scary to me. Because it's so stupid.

Michael Causey is co-host of the radio program Get Up! on WOWD 94.3 FM Takoma Park.