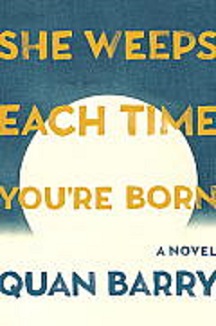 Poet Quan Barry’s debut novel, She Weeps Each Time You’re Born, tells the story of Rabbit, a baby girl born at the peak of the war in Vietnam, along the Song Ma River on the night of a full moon. Rabbit has strange powers and an amazing intuition. Through her, Barry takes readers back in time to the days of French Indochina and World War II, and forward to reunification and the Russian arrival. The story is magical, ghost-filled, and real.

Do you believe Rabbit succeeds in finding a place for herself in the history of Vietnam? And what does the novel’s title mean?

Because I'm a poet, I believe that literature is a transaction between an author and a reader. It's my job as the author to give my reader a strong narrative framework and to make sure that it's rich enough that the reader will be able to make various narrative interpretations on their own without me being too expositional and tying everything down. I'm not interested in imposing a single way of reading my work — I'm most happy when readers are willing and excited to interpret some things for themselves. Consequently, I think it's up to the reader to decide how successful Rabbit's journey has been. And, similarly, to me, the title can work on multiple levels and resonate for readers in different ways. So again, I'd prefer to let folks enjoy the process of coming up with their own theories as to how it ties to the novel.

Why did you give us a family tree of unrelated people?

Family isn't just blood — family are the people we bring into our lives. For this reason, and because many Westerners aren't as familiar with Vietnamese names, I decided to include a small chart of who's who.

Do you think one can smell sorrow? Can you describe the scent? Musty and sweet, a touch floral like pressed rose petals?

I believe that strong emotions elicit responses in the body. Everyone is different. Consequently, what might smell like sadness on one person will smell differently on someone else.

“Babies arrive fully one year old with little old man faces, old souls hardening in new vessels.” This description is wonderful. Several times in the story, you refer to the "modern system of reckoning" used to decide age. What is the system?

In many different cultures in Asia, babies are described as being one year old when born. This system of reckoning age is also different from the West because people become a year older on the lunar new year and not on their actual dates of birth.

One of many unexpected consequences of two cultures meeting in a war zone: “Overnight a thousand year culture of hospitality is reduced to every man for himself.” This is such a powerful and sad truth. Do you believe that it would be possible to return to the old hospitality?

Sadly, I feel like this truth is true not just in Vietnam, but in many places and cultures including our own, which more and more is a world in which people are isolated. Happily, I do think cultures can change in positive ways, but I don't think it's easy. I think such change begins on the level of the individual.

So fish are attracted to light like moths? Is this true?

Yes, there is an ancient way of fishing with birds that occurs much as I've described in the book.

The living need light. Why do the dead need music?

"The living need light, and the dead need music." This is an old Vietnamese saying. I think this adage reflects the idea that the visual world of the living is a material world. After death, material things are no longer important.

Is the method you describe for tenderizing dogs still used, if ever?

Honestly, I don't know if it's an urban legend or not. Online I found stories of dogs being tenderized in such a manner before being eaten, and the violence of the image worked for the story I was telling, but I have never seen it done nor do I have any proof that it happens or ever did.

Why do you tell the story allegorically?

In many ways, I ultimately see my novel as being a ghost story, so it made sense to me that there would be mystical elements in the narrative that might defy everyday rationality. I also think there's a difference between subtext and allegory. To me, despite the magical aspects of the narrative, my characters are not existing within an allegorical framework — they very much live in the real world, albeit a world with some fantastic moments. However, I do think that on a sub-textual level, there's a lot that can be read into the characters' actions.