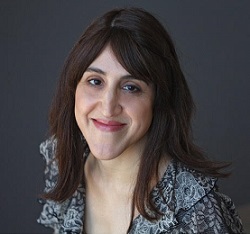 Polly Rosenwaike's debut story collection, Look How Happy I’m Making You, should be required reading for all women of childbearing age (and for mothers potential, new, or, like me, seven years in). It's a book I wish I’d had during my days of should I or shouldn't I, one that offers an honest, funny, and devastating look at the complexities of becoming — or not becoming — a mother.

Rosenwaike's 12 stories offer a panoramic view of motherhood and grapple with the challenges and heartache of infertility, miscarriage, and postpartum depression, as well as the stress and tension of couples struggling to settle into their roles as parents.

In one story, a 35-year-old woman is determined to start a family with her younger, less-committed boyfriend. When the relationship is undone by a white lie, she faces the prospect of raising the baby on her own, saying, "I thought that I could handle being a single parent, but what had I done to prepare for such a formidable status?"

In another, a newly expectant mother finds her happiness nearly extinguished by grief when her beloved aunt and role model is diagnosed with stage-four stomach cancer. I was reminded of my own emotional yin and yang when my pregnancy coincided with my beautiful mother's swift decline into dementia.

Of course, it's Rosenwaike's writing — precise, funny, and breathtaking — that really matters. A pregnant woman has been colonized, a newborn's fingernails are like tiny opals, and one woman, when describing her advanced maternal age, says, "fertility-wise, I was like an aging ballplayer: how many years could I have left?" Me and my then-pregnant 44-year-old self couldn't have said it better.

This book is better than any of the What to Expect books. What was your intention in putting this collection together? Did you see it as a guidebook of sorts?

I briefly contemplated a title for the collection that would riff on the What to Expect empire. And I called one of the stories “The Dissembler’s Guide to Pregnancy,” as it follows a woman who stops taking the pill — without telling her lover — through various stages of pregnancy. I read a lot of guidebooks before my first child was born, probably too many. While it is, of course, good to be informed, to be prepared, you just can’t really be prepared for what will happen to you — as an individual — in pregnancy, in childbirth, in going from not having a baby to taking care of one all the time.

There’s a way in which trying to plan, to do everything right, can be detrimental. In the context of such a highly charged physical and emotional experience, it’s easy to feel like a failure. I wanted my story collection to be a sort of anti-guidebook, in that its goal is not to deliver information or tell women what to do, but to tell intimate stories that allow for complexity rather than clinical explanations or prescriptions.

You admitted to being a fan of the Sweet Valley High books, which are, in a way, perhaps prequels to your book (the girls grow up and think about babies). Is there something drawing you to the drama of women on the verge of something, whether womanhood or motherhood?

First, a brief caveat for those whose ears perked up at the mention of Sweet Valley High. There are no gorgeous twins in my book, no sparkling California beaches, no boyfriend-stealing. But thinking back on myself as a preteen reader, I can recognize how that series appealed to my interest in domestic dramas, to my desire to explore conflict within relationships between family members, friends, and romantic partners. “I knew they were PG-rated trash,” the literary snob in me wants to say. But I continued to be compelled by the coming-of-age stories of girls. And the story of becoming a mother is a kind of coming-of-age story. Not that motherhood is a necessary part of a woman’s journey to adulthood — I loathe that idea. But for women who become mothers (hopefully by choice), the transition is by its nature a dramatic one, and thus, I think, very worthy of exploration.

You have two young daughters. Were any of the stories in your book written pre-pregnancy? Which one did you write first?

The first story I wrote was “Field Notes,” about a biologist who has an abortion, and I also wrote drafts of “White Carnations” and “Grow Your Eyelashes” before I became pregnant. As hard as it was, once I had children, to balance story writing with everything else, it was both helpful to my fiction to have the material of new motherhood to write about, and helpful to my new-mother psyche to try to channel my burgeoning emotions into fiction.

Which of these stories is the most autobiographical?

There are autobiographical moments and details in many of the stories, but the most extensively autobiographical one is “Period, Ellipsis, Full Stop.” Similar to my own experience, the character has recently moved to a Midwestern town for her husband’s job when she gets pregnant, and she’s struggling to build up her editing career, which I was also trying to do. To describe her miscarriage, I relied on the experience of my two miscarriages (one before I had my first daughter, and one before the second).

Perhaps not everyone wants to read a play-by-play of a woman losing her pregnancy, but I believe that miscarriage should be understood and normalized as a component of many women’s reproductive lives. Part of what’s difficult is the air of secrecy and shame that surrounds it, and so I wanted to go in depth about what it’s like, as well as to connect what’s happening in this woman’s body to other insecurities about relationships and work, modeled on things I’ve contended with in my own life.

Here's a craft question: You use second person in "Ten Warning Signs of Postpartum Depression." Was there a certain ease in using the "you" in this story?

Fresh on the heels of reading Lorrie Moore’s wonderful collection Self-Help, over a decade before I began writing “Ten Warning Signs,” I tested out the second person. The story I wrote is long gone to the dust heap of failed experiments. I’m sure it was irritatingly breathy and self-indulgent, as the second person can be. My hope in trying again with “Ten Warning Signs” was that its particular form and subject matter would support the perspective. I built the story of a woman’s experience in the weeks after her son’s birth within the framework of 10 symptoms of postpartum depression (which I adapted from a website).

Indeed, there was an ease and pleasure in using “you” throughout to describe how this character feels and acts. After the birth of my first daughter, when I was stuck in the hospital recovering from a C-section and trying desperately to breastfeed, a nurse came in and saw me crying on the bed. The nurse asked my partner, “Does she have a history of depression?” “Ten Warning Signs” is a response of sorts to that treatment: Excuse me, there is a person inside this depressed-looking person. And she’ll tell her own story in the way that she wants to tell it.

A little birdie (okay, your agent) told me that you're working on a novel now. Can you say anything about it?

At this point, I can only speak about it in a fragmented way. It deals with coming-of-age, cross-cultural love, immigration, the Midwest, New York City, and sleep.

[Editor’s note: Polly Rosenwaike will appear at Politics and Prose in Washington, DC, on Sat., June 15th, at 1 p.m. Click here for info.]

Cathy Alter is author, most recently, of CRUSH: Writers Reflect on Love, Longing, and the Power of Their First Celebrity Crush, and a member of the Independent’s board.