An Interview with Niall Williams

Like snuggling in a comfy chair with a good book and a cup of tea, Niall Williams’ History of the Rain is a delicious treat for readers. 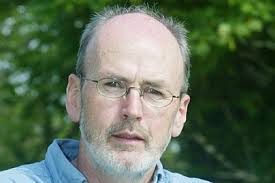 Ensconced in her upstairs room with the rain-soaked skylight above and the River Shannon flowing outside, bedridden protagonist Ruth Swain, in History of the Rain, tries to piece together her family’s past by reading each of the nearly 4,000 books her late father left behind. Here, author Niall Williams discusses the novel, which was just named to the 2014 Man Booker Prize longlist.

Ruth says she is not an “ePerson” or an “iPerson”: “A book is a sensual thing. You sit curled in a chair with it or like me you take it to bed and it’s, well, enveloping.” Indeed! Are you an ePerson? Or are you a paper purist?

I’m not exactly a purist, but I grew up in the company of books, in a place and at a time when physical books still had an aura that was almost reverential. Libraries were like churches. What is now part of Ruth’s oddity — that she only reads actual books — was, of course, once normal. For me, a book definitely is a sensual thing, with centuries of craftsmanship and tradition, and, because it is also a spiritual thing, civilization’s greatest invention. Technologies are useful, but they cannot move me.

Ruth talks about the connection readers of the same books have with one another, particularly if it’s a used book or a library copy. She calls books the “literal original Facebook.” How do you hope readers will experience History of the Rain?

First, I’m happy to have any readers at all. It is something I never take for granted and am often astonished by because, in the beginning, you are telling the story to yourself and for yourself, and you don’t see it as an actual book on a shelf somewhere with its own existence. Writing it, I was sitting in the cottage in Kiltumper [Ireland] and saying the lines out loud to the rain, an indifferent reader. At one level, this novel is about stories and storytelling. And in that tradition, the voice of the storyteller is crucial. So I hope readers will settle in to listen to Ruth Swain. She has a unique voice and I, at least, found that voice compelling.

Great Expectations is frequently mentioned in your novel. Is it Ruth’s favorite novel? Yours?

It’s hard to say which book is your favorite, but Great Expectations was certainly the first book that was important to me. I suppose it was the first book that entered me in a way, a book that I lived more vividly than any other, sharing Pip’s anxieties, his love for Estella, his fascination with Miss Havisham, and so on. I read it first in school at age 13, when it was part of the curriculum and when the Department of Education thought nothing of setting 400-page novels for 13-year-olds. It acted as a bridge between all those smaller adventure, war, western, and mystery novels you had read, and now the world of grown-up books. Ruth won’t allow herself to say one book is her favorite, because it would be bound to disappear.

The Swain family believes in the “impossible standard philosophy” — essentially the idea that you can always do better. Does this make it impossible for them to be happy? Once we achieve a goal, we are immediately setting our sights on the next big thing. But is this necessarily a terrible thing?

It’s not a terrible thing; it’s a human thing. We aspire. John Cheever said all art is a monument to human aspiration. We take on impossible goals. We leap in the air and fall on the ground. In some ways, maybe it’s our greatest attribute that we keep getting up and trying again. Failing again. Happiness can never be won outright, but you can have moments when you’re in midair. I’m only interested in writing the things I can’t; the books that seem impossible when setting out. How can I write this family’s story in the voice of Ruth Swain?

Like many preteen girls, Ruth was a little obsessed with her physical development. She says, “The task of womanhood is to balance the weight that lands on your chest and could easily topple you over.” There are several examples in the novel of women who really do seem to bear the weight of the world and somehow remain upright, but Ruth herself does not seem to have that ability. Why?

In the Swain family, the men are dreamers, fishers, pole-vaulters, soldiers, poets. The Taltys are salt-of-the-earth women, bread-bakers, meal-makers, realists who only release their burdens in dancing. Ruth is ill. She can’t dance. But she’s also a twin and, in the end, must be both dreamer/writer and realist. Her journey [is in learning] how to balance outrageous and crushing grief with carrying on and believing in the possibility that love is real.

Ruth sees men as very private. “They are whole continents of privacy; you can only go to the borders; you can look in but you cannot enter.” Is that really true?

Ruth’s father dies before she feels she really knows him. Because some part of him is “away” in books and writing, he presents as private and mysterious, unlike her mother, who is always there, and whom she feels she knows. And yes, of course, because Ruth takes after her father and, as a writer, she is just as private. I don’t think the pronouncement is absolute; like many of the things Ruth says, it is part of a context whereby she is frustrated [by not knowing].

On the first page, Ruth says, “I don’t know if time tarnishes or polishes a human soul.” What do you think?

On a good day, I’m with the polishing. Every reader will have to decide what they think about Ruth. I couldn’t say. But I would suggest that, in telling our stories, we find redemption, and, in shaping them, we find meaning — that the storyteller heals himself through story the same way the singer does through song or the painter through the painting. The very act of writing, singing, painting is itself an affirmation, and that it continues everywhere all the time despite the many hardships and odds stacked against it remains one of the most hopeful things in the world.

Mandy Huckins holds an M.A. in English from the University of Charleston in South Carolina. She recently moved to the Washington, DC, area with her husband, an Air Force officer. When not reading, she works for the Combined Federal Campaign-Overseas, which provides uniformed service members and Department of Defense civilians serving overseas the opportunity to make a charitable contribution to one or more of over 2,500 different organizations.

An Interview with Christine Otten

The Netherlands native talks race, The Last Poets, and what’s gained in translation.

An Interview with Eryk Pruitt

The "rural noir" writer talks filmmaking, the South, and What We Reckon.