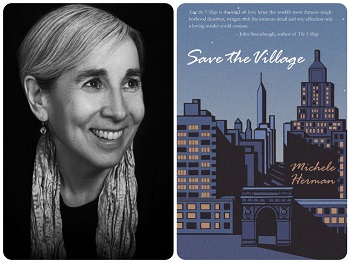 Award-winning writer Michele Herman is a columnist, writing instructor, editor, and poet, as well as a longtime columnist for the Village Sun in Greenwich Village, where she and her family live. She is also the author of two chapbooks — Just Another Jack: The Private Lives of Nursery Rhymes and Victory Boulevard — and recently published her first novel, Save the Village.

How do you go about switching back and forth from poetry to fiction?

Until 2015, I wrote only prose. That June, I signed up for the Tupelo Press 30/30 poetry-writing marathon on a whim, feeling emboldened to try scary new things after being given the gift of acting in community theater. I produced 30 poems in 30 days, all posted on Tupelo’s website. Those poems formed the core of my first poetry chapbook, Victory Boulevard. Since then, I’ve been entirely focused on poems and essays while waiting for new stories and maybe a new novel idea to bubble up from my unconscious. Writing poems has made me happy and productive, two qualities that I find hard to separate. With poems, there’s less investment and a quicker payoff, with more time spent doing one of my favorite things: playing with words. And in poems, I’ve been able to write about some personal material that eluded me in other forms.

Let’s talk about your novel’s title, Save the Village. Your main character, Becca, has been involved in various landmarking and urban-preservation moments, but that doesn’t figure much in the plot. What are you pointing to with that title?

Save the Village was the name of an anti-overdevelopment organization my husband and I were active in in the 80s, when we moved to the Village, a nod to urbanist Jane Jacobs’ earlier Committee to Save the West Village. I like the way “Village” can refer just as easily to Greenwich Village and to the kind of “village” it takes. I kept Becca’s activism in the background on purpose because when we meet her, she’s tired and discouraged. In early drafts, Becca was going to fight a terrible development scheme: a conversion of her tenement to luxury housing (something that has actually happened in the neighborhood). A novel is roomy but not infinitely roomy; there just wasn’t space for that plot.

The narrative is sparked by an act of destruction. Was it difficult to destroy a Greenwich Village landmark, even in your imagination?

Yes! Particularly because I’m married to a guy who works for the Parks Department. I shied away from creating something so awful. But my allegiances are with the writing process, and in the end, the disaster made the writing much easier, raising the story’s stakes and compelling me to imagine all the fallout. It also provided shape, momentum, and lots of primal emotion.

Various characters link the book’s opening explosion to 9/11. Do you see Save the Village acting as a 9/11 novel?

After 9/11, we all talked about whether the other shoe was going to drop. The explosion I created was definitely a shoe, albeit a small one compared to the Twin Towers. That September week in 2001 was so distinct, everyone’s emotions so wide open, and those days were definitely in my mind as I wrote.

Becca, who gives tours that speak to preserving the historical Village, renews a number of connections, perhaps most importantly with Melora, a real estate broker working to bring in a newer, sleeker Village. Do you intend their friendship to call up a kind of meeting of these two points of view?

I loved the process of creating a close friendship between two new moms, then having their “lifestyles” diverge so much that they become sworn enemies, and then figuring out how they might find their way back to each other in a time of tremendous upheaval. I like to believe that even the most rigid people can change and grow. Becca certainly grows during the time we spend with her, but Melora is also undergoing a major rethinking of her yuppie life choices. I’m rooting for both of them. In other words, while they represent two opposing kinds of Villagers, I wanted them to be living, breathing people rather than just symbols.

One of the joys of reading Save the Village is encountering the many familiar places you mention. For anyone new to New York, there is a kind of introductory tour here. Are there spots that you are particularly happy to call attention to — or that got left on the cutting-room floor?

I’m both pleased and aghast about Washington Square — pleased because I know of no livelier, more welcoming place and aghast because of what I made happen there. I’m pleased that the Rebecca, Becca’s tenement, gets a starring role, though it doesn’t exist in the real Village. It was fun to mention so many locales I know well: the Westbeth basement sale, D’Agostino’s supermarket, Our Lady of Pompeii church, Garber’s Hardware, quaint West Fourth Street, [and] the late, lamented St. Vincent’s Hospital.

I had to cut a whole lot: The tourists from South Carolina admiring the Jefferson Market Library with its fanciful clock tower. A plotline for Photojay that took place in what we parents call the “key park” of the Washington Square Village apartment complex. Becca swimming at the Carmine Street pool. [And] a flashback of Becca climbing the interior staircase to the top of the Washington Square Arch — something I once got to do myself.