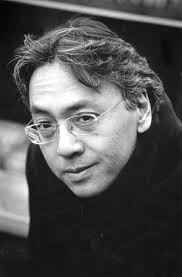 Kazuo Ishiguro is the prizewinning author of seven novels, including The Remains of the Day and Never Let Me Go, both of which sold more than a million copies and were adapted into highly acclaimed films. Here, he discusses his most recent work, The Buried Giant.

In the spring 2008 Paris Review, you hint at The Buried Giant, speaking of a time after the Romans and Celts have disappeared, and here is where The Buried Giant is set. Had you been carrying it with you all this time?

I have found myself in the situation with story but no location or setting. 2008 was probably a writing time, and maybe I was thinking about this book around that time, probably for the first time. After Never Let Me Go, around 2004, I had it in my head. Of course, in the interview, I could have also been talking about another story, after Britons, before Anglo Saxons. I wrote some pages and then put it aside.

Does it happen often, that you put things aside?

I showed my wife the first 60 pages of The Buried Giant, and she said I should start again from scratch. She’s been my first critic ever since I started to write. Never Let Me Go had three attempts, three versions in the 1990s that are quite different. The third time around, it worked. The Buried Giant was put to one side. It's not a moment to panic. Never panic when this happens.

Is your wife always the first reader?

Trust doesn't happen immediately, but over time. My wife was looking at my very first attempts before I was a writer. Over the years, you learn to agree and disagree, and not just on books, [but on] movies and many other things, and you have a sense of the person, a relationship, consistency. You know where that person is coming from and how to evaluate their comments. Some you take seriously, some not. You also have a kind of recognition...you know it, it’s not really discouraging.

Do you feel English? How does it alter your perspective in the writing?

Never felt very sure. Everyone spoke about this around Remains of the Day. Did I have a certain perspective, an outsider’s take? It is very hard for me to measure it myself, very hard to know if I have a special perspective. I was brought up in a home speaking Japanese and never adopted the attitude of immigrants because we were always about to return and therefore, [were] not necessarily a part of the culture. Until I was 15 years old, no clear decision was made about remaining in Britain.

In reading your stories, I kind of got the idea that once you've mastered the art of character, you can place them anywhere. True?

I find myself becoming slightly impatient with characters that have been worked on in isolation, and you can tell. If they are in isolation, they can be interesting, too, but they have to be connected to really engage. In fact, if I had one criticism of one of my very favorite writers, Dickens, [it’s that] his characters can be memorable and colorful, but the relationship is often flat and they don't move. Pull out a key relationship and ask this question: Is it complete? Is it interesting?

In The Buried Giant, is it the competition between the knights that is more accessible than the tenderness between the Axl and Beatrice, the older forgetful couple?

Don't know if this is the case; people tend to respond to the old couple. People really found the couple touching and moving. It reflects the two parts of the book. I wanted to examine this question of memory and apply the question to a marriage and to society. I wanted these things to reverberate. Is societal memory similar to personal memory in a marriage? Maybe key things are different. The couple wants to remember, but the fear comes in when the memories actually come back.

They say to themselves, “If we don't face the challenge, maybe our love is phony and based on a false premise.” Is the love true?

The things that they do remember are trivial — the green cloak, small moments of jealousy. Is it because these are the things that really count?

The little things signify intimacy in a relationship. The real texture is in the little things that mount up to a life shared together. Could be anything and, as such, it’s important. It's the irony in the overall situation. What is right for the couple — that they could find their memories — is novel and positive, but not for the society.

Forgetfulness and forgiveness maybe go hand in hand, but one takes a continuing act or movement of character, and one doesn't, right?

In the story, the very thing that makes it possible to remember resurrects the other memories and, unfortunately, mobilizes a new cycle of violence.

Forgiving and forgetting don’t really go together. How is it possible to forgive something you've forgotten? Memory is a triumph for the couple and their kind. The starting point of the conflict is at the individual level of the memory coming back. Terrible things are then unleashed. To forgive, you have to remember.

I could have quoted so many passages from the book, the juxtaposition of lasting prose. Sir Gawain does not remember meeting Axl, and Master Wistan explains, "The years can be a rich disguise.” I love this line and had to mention it.

The monk's trap in the story is like the biblical one that Joshua and the Israelites set: the Gibeonite deception. Did yours come from the Bible?

I didn't take it from the Bible. It's a classic thing to trap the enemy. "The Seven Samurai," "Magnificent Seven," each use a similar ruse when hordes of bandits face a handful of peasants. My scene is more "The Seven Samurai." It’s a proven strategy.

"Ancient quick-tongued man can make grievances rhyme with fresh desire for land and conquest." I was reminded of Yugoslavia when I read this line. I'm troubled by how easily war can be aroused in men. Why not peace?

Yugoslavia had a forced peace and for years pretended to forget, but this kind of peace does not work. Only superficially, together, do forgiveness and forgetfulness seem to work.

Back to societal memory, it's always been there. You have to use societal memory for political ends. In its crudest form, you want to mobilize hatred and violence. Try to reawaken this kind of memory on the part of the people. Hate can be rehashed so quickly.

And yet, there are a few examples of peace being properly waged. South Africa — when apartheid came to an end and the peace was very carefully balanced, they did an amazing job of venting anger, emotion, and injustice and then balancing it at the same time. We cannot go and punish everyone. Truth and Reconciliation, deliberately instituted, can work. The shining example in recent history is South Africa, a nation on the brink of catastrophe that somehow avoided it by getting remembering and forgetting right.

Ferguson ought to institute a formalized “Truth and Recognition” [program]. It could be very useful to do this in America, this kind of balance. Europe after the Second World War is another example; the Germans did it well. That peace has been achieved in the western part of Europe is a real triumph.

What is it that the book frees you from, if anything?

It feels like the first step. I've wanted to write this story for a long time, and having written one book about both memory and forgetting feels like a first step and has raised all kinds of thoughts and emotions, new and more areas to explore. I'm excited at having embarked on the first step in this terrain. It's important.

An Interview with Charles Todd

Meet the mother-and-son team behind the pseudonymous author of the Ian Rutledge mystery series.