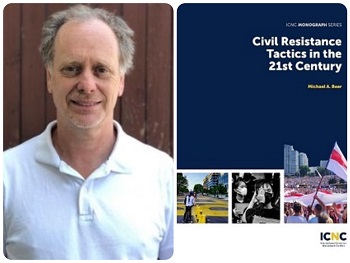 Michael A. Beer is director of the DC-based Nonviolence International, an organization he’s been with for nearly three decades. “I believe that Dr. King was not overly exaggerating when he said…that we can either choose a nonviolent future or a future of non-existence,” he says. “This is not just some sort of intellectual, nice idea. Nonviolence is an approach that basically says that the other parties, even if I disagree with them and even if they're being brutal or trying to kill me, matter as well.”

Here, Beer discusses his new book, Civil Resistance Tactics in the 21st Century, which came out in March.

Please talk a little about the book.

You've put a lot of time and effort into developing and building this enormous taxonomy of nonviolent, direct-action tactics. But my sense is that you've chosen not to evaluate their relative historical effectiveness in your book. Can you explain?

One reason is because the book would be five times longer. The other reason is that a tactic can be the right tactic in the right conflict at the right time, and yet it can be performed very poorly. And so, it would be challenging to evaluate historical effectiveness when the implementation of these actions is not all done by the same people with the same experience and the same capabilities.

Okay, so basically, you're giving people more options. And you don't have to be evaluative, so you're going to use their creativity to help…

Yes, we provide 23 examples of new tactics in the book that we explain with a story to help provide a context and an understanding of an action. We're probably biased toward tactics that are reasonably successful in this database and book, but we provide [narratives] in the latter part of the book about how these tactics are used. It's easy reading, and you can understand again the creativity of all different kinds of people. And we've really emphasized the global nature of nonviolent action with our databases filled with actions [from] all over the world.

Can you speak to the variety and breadth of tactics that were used by Black Lives Matter and other affiliated groups who continue to fight police brutality and structural racism?

One of the key factors that points to the success, not necessarily of a particular tactic, but to nonviolent action generally, is the number of people that participate. This may seem rather obvious, but Maria J. Stefan and Erica Chenowith, within their research, have shown that situations where you have at least 3.5 percent of the population showing up in a sustained way are much more likely to succeed in [the] actions they use to achieve their goals. The Black Lives Matter movement had enormous participation in the United States particularly, but also in other places in the world.

One of the new kinds of nonviolent tactics revealed here in the George Floyd murder was the use of…sousveillance, which is the opposite of surveillance. In the case of surveillance, that's what the state and corporations do to us. And that's top down, where they're looking at us, but “sous” is the French word for under, or from below. And so, in the George Floyd case, you had a girl who videoed this police officer. And despite being told…to back off…she continued to do so.

That's a way of viewing the authorities [or] corporations from below; use our cameras and abilities. She collected all this video of the killing, the murder, and then shared it around the world. Sousveillance is a tactic that people are now using everywhere against the authorities, and we want to encourage that. It's something that people implicitly know, but we want to explicitly remind them that they really can use their tools to bring forth information for the public.

I would just finally say there are Black Lives Matter efforts going on that I think are not just disruptive ones but constructive ones. This might be new kinds of ways to highlight reparation approaches, new kinds of organizational models or actions. I wouldn't be surprised if we see new kinds [of ways to highlight] defunding the police, to some degree, and shifting funds over to social workers who can police in a less lethal and more humane way. And so, these are nonviolent actions and tactics that are very encouraging, that institutions are taking on to change how policing is happening.

When DC-area restaurateur and peace activist Andy Shallal interviews luminaries for his Friday Evening Salons at Busboys and Poets, he often asks who, living or dead, they’d invite to a dinner party. Which activists or others would you want at your gathering?

I think the list is long. I'd like to have Mohandas Gandhi. I'm not sure he’d sit at a table; he’d probably sit on the floor. And Barbara Deming, the great feminist nonviolent theoretician. I would like Emma Goldman, the anarchist leader in this regard. [I would also invite] very creative thinkers and artists who have helped change the way we think. Leonard Bernstein is a real inspiration to me — how he combined music and social change. [And] I think Harvey Milk would be kind of a cool person with whom to sit down.