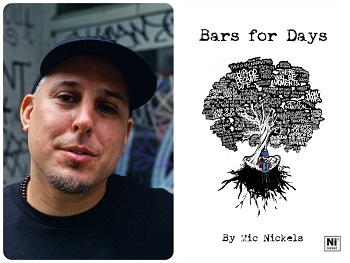 Mic Nickels grew up in Hartford, Connecticut, just up the street from where I spent my early years in West Hartford. When we got in touch to set up an interview, I couldn't help but reminisce about our old stomping grounds. There was the annual Italian Festival, where, other than buying feathered roach clips to fasten to the straps of our overalls (we were too young to know their real purpose), the highlight was watching the locals climb a greased pole in a futile attempt to grab a bouquet of salami.

There was the indescribable Franklin Giant Grinders (grinder being the New England term for subs). And there was also our shared fascination with the Al di La restaurant, where Nickels’ beloved mother worked, where my father ate, and where local mobsters gambled in the back room.

So, it was no wonder that I was feeling nostalgic when I began reading the rapper and lyricist’s new book, Bars for Days. Since it’s paired with an accompanying soundtrack, I started referring to it as an audio memoir, a surround-sound experience featuring music by Method Man, Teen AF, Timbo King, and others, and a Scorsese-worthy cast of characters, including bank robbers, drug dealers, and a famous rapper who either did or didn't steal the idea for his “Every Breath You Take” remix. And as if this wasn't enough, the book’s acknowledgements are a who’s who of the early days of hip-hop.

This is the first book I've ever read that comes with its own soundtrack. How is the music meant to accompany the text?

What I mean when I call this project “an interactive experience” is that the book explains my life and my growth into my artistry all the way up to the point this album is recorded. There are scenes with me in the studio recording these tracks. So, the reader/listener is going to be able to understand me on a deeper level as they read the book and listen.

In the book, you reveal your mother's early drug use. Did she know you were working on a memoir that would expose some family secrets?

She did know that I was writing about her past and had initial qualms but ultimately gave me her blessing. She and I made amends, and she understood that those years made a huge impact on my childhood and defined me in a lot of ways. Going through some of those old memories while writing brought a lot of buried emotions to the surface, and it was like therapy for me. She did end up getting clean, though, and she was sober the next 30-something years of her life, and I couldn’t have been prouder of her.

You were raised by some strong women. How did their influence carry you through your own troubled times?

I was blessed with an amazing cast of women who helped me get through a difficult childhood and beyond. I speak on the fact that they each had their own tumultuous episodes in their lives before I was born, and somehow, they always maintained a positive outlook throughout their lives. “Laugh through life” was their collective mantra, and that had a huge impact on my own disposition.

How did you make the transition from writing rap lyrics to writing a 400-page book? What was the catalyst?

First, I wanted to document all of the crazy experiences I had in my life with a videographer, but it turned out to be a bit more expensive than I expected. Then, when I returned to college to finish my degree, one of my final classes was called “Writing the Autobiography.” I had been excelling in my creative writing courses, and my professor was super encouraging for me to write this story, so I just decided to go for it. I literally got going on the project right before covid broke out, which allowed me the time to get it done. I love the freedom of writing while not constricted [by] a specific cadence and rhyming.

The book is such a time capsule of period clothing, music, and cars from the 1980s-90s. Did you keep a journal when you were younger or rely on photo albums to recreate anything?

I didn't keep a journal. For the most part, I was just able to draw these stories directly from my memory. People are always telling me, “I don’t know how you remember things so vividly.” That’s how I can remember thousands of lyrics onstage, as well. To write this book, I literally took some time to reflect and thought about all the important moments in my life and listed them on my computer. Then, one by one, I took time to remember all the details of each story before I began writing it. A few times, I referenced old photos or called people who were there to help spark my memory. I really wanted to make sure that each story was as accurate as possible and vividly described so the reader feels like they are peering into a window of time.

This book is more autobiography than memoir; it's an “I was born, and then…” story that moves forward and ends with the deaths of your mother and George Floyd. Despite these seismic shifts in your own life and in our collective lives, the book still ends with optimism. Was this important to you?

I'm just inherently an optimistic person. As screwed up as these times might seem right now, at the end of the day, I am a believer in humanity. I wanted to convey that message that everything is going to be okay. As you read the book, you find a parallel between my life and the rise of the hip-hop generation. It was important for me to speak on behalf of that movement and let it be known that it is far from dead — that the fight against oppression and the message of equality this art form once represented are still alive and well.

A Q&A with the author of The Natural: How to Effortlessly Attract the Women You Want