An Interview with Libby Copeland

The author talks identity, spit kits, and the hidden pitfalls of untangling your DNA. 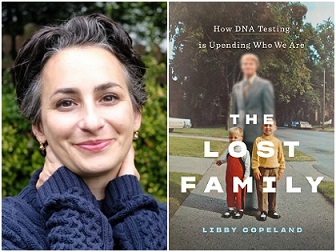 In her new book, The Lost Family: How DNA Testing is Upending Who We Are, author Libby Copeland asks more questions than is humanly possible to answer. So many, in fact, that the reader soon discovers that the answers, their answers especially, are on a continuum.

With the availability of home genetic testing services and the ease of a simple cheek swab, it's now possible to discover where your ancestors came from or if you carry certain genetic risks. But what if you uncover a secret that rewrites the script of your entire being?

"What do you do when you find out you have a paternal half-brother, with all that this implies about your parents' marriage, your father's loyalties, your own identity?" Copeland writes. "What do you do when faced with the prospect of informing your elderly mother that her genetic father was not the man she knew, but a sperm donor?"

An award-winning journalist and former Washington Post reporter and editor, Copeland listened to the stories of hundreds of subjects for The Lost Family. Her care for them is evident and, at times, the lessons they provide are heartbreaking.

You trace the story of Alice Collins Plebuch throughout the book, but I’m wondering if any other person’s story really stuck with you.

There are so many! I kept up with many of the people I interviewed over the course of a year or more and witnessed as they processed what they’d learned and, in many cases, developed relationships with genetic kin they hadn’t known existed. I’m still in touch with many of them, and their stories have certainly stayed with me.

One story that really moved me was the account of a genealogist named Roberta Estes, who discovered her brother late in life. Her experience offers a moving meditation on all that genetics can tell us — and all that it can’t. It’s a lesson in how love and intention supersede biology when it comes to how we define family.

I also loved the story of a man named Rosario Castronovo, who discovered…that his own ancestral heritage had been hidden from him by his mother to protect him. For Rosario, this discovery has led to years of historical research into the African-American community of Vermont, and years of inquiry into his own ethnic identity. These DNA revelations are not trivial; they profoundly reshape how we think about family and how we define ourselves.

How did you find your “characters” here? Did you have to sort through hundreds before finding your stars?

After I first wrote about Alice Collins Plebuch in the Washington Post in 2017, I got over 400 emails from readers telling me their own stories of how DNA testing and genealogical research had changed their lives. These stories blew me away. Some were heartbreaking; some were heartwarming. Often, they were both at the same time.

These stories were intimate and affecting and emotionally nuanced, and I was touched and grateful to those who shared them with me. DNA-testing surprises can’t help but be personal, can’t help but make a consumer of this technology feel vulnerable. They invite questions: How much about what I was told about myself was true? What was kept back? Who am I, really, and who would I have been if I’d known the truth all along?

I wanted to make sure I included a breadth of stories — both the experiences of those who tested on a lark without an expectation of a surprise and those who set out looking to answer questions. The Lost Family explores the experiences of adoptees using DNA tests to find their birth families, and donor-conceived people who forge relationships with their donors and their half-siblings — sometimes 20 or 50 or more — and the stories of those who find in their families an NPE, which stands for “non-paternity event” or “not parent expected.”

The structure of the book is remarkable. You weave so many stories (it’s hard not to envision a strand of DNA) together that I found myself wondering: How did the one narrative emerge from so many?

Ha, thanks! I love that visual! Now you have me wondering if I could plot the narrative along a double helix. Regarding the structure, that was actually easy to arrive at: I knew Alice’s story had to be the backbone of the book. I’d told her story in the Post at 6,000 words, but there was so much more I wanted to report and relate.

Alice herself was a fascinating person, and I wanted to fly out to Washington State and spend time with her, try to crawl inside that amazing analytical brain of hers. I wanted to get to know her family, and I wanted to go back 100 years through historical research to understand the beginnings of her genetic mystery.

Because Alice’s story had so many twists and turns — so many theories offered and then dismissed when the facts didn’t fit — I thought this through-line was the perfect vehicle to tell one story in many. At each juncture in the story when Alice considers another theory to explain her mystifying DNA results, I could explore the story of a person for whom that theory did prove true and show readers what that looks like. What can it look like when a man tests and discovers the man he considers his father isn’t genetically related to him? Or when a woman tests and discovers she was adopted and never told about it?

What happens when someone’s “origin narrative” is toppled as a result of a simple cheek swab?

I’ve talked to a lot people about their family revelations, as well as how they process surprises in their genetic ancestral origins (which is a fancy way of referring to those “ethnicity estimate” pie charts that companies like Ancestry and 23andMe give you). From those conversations, and from conversations with psychologists and sociologists who study the topic, I’ve come away with the sense that the DNA age can expand how we define ourselves and our own identities, at least insofar as it comes to our familial relationships.

On matters of the heart, the people I interviewed often tended to be more inclusive rather than less, by which I mean they didn’t see biology as the only way to define family. They processed these revelations with a nuanced understanding that family is not just (and sometimes not at all) genetics; it is love and intention. On the other hand, there are people who deny or decline relationships with their genetic kin for a variety of reasons, and there may be really painful historical explanations behind that.

There’s been a lot of concern that the ethnicity estimates that companies offer may lead people to switch their ethnic identities on a dime, like that guy in the Ancestry ad who trades in his lederhosen for a kilt. But from what I’ve seen and from the research that’s been conducted, people actually seem to be selective and thoughtful in how they process the information that comes from those little pie charts. They filter the new information that a spit kit gives them through experience, aspiration, and so on.

And if you think about it, that’s no different from how we operate even in the absence of DNA testing. A lot of us melting-pot Americans (including myself) identify more strongly with one part of our ancestral history than another, for a variety of reasons, including the fact that one’s cultural ethnicity can be quite different from one’s genetic ancestry. And if you look back on the history of genealogy as it’s been practiced in the United States, you see that people were selective about their family histories all along, highlighting some branches in their trees and ignoring others.

At the heart of your book is the simple question: How well do we really know our families? Over the course of writing it, did you come to look at your own family differently?

Reporting this book, with my own genetic information cycling through the databases of three major companies, I often felt like it was just a matter of time before some surprises popped up in our family. It hasn’t happened, at least not yet, though we do have some interesting twists and turns in our family tree going a few generations back.

But many families experience an NPE — for instance, a man may be contacted by a child he conceived decades ago. Sometimes the man has known for years he had a child, though it took genetic testing to make that fact known to his loved ones, and sometimes he never knew. Those experiences don’t just belong to that man and his genetic child, of course; they affect everyone in his family, including his spouse, if he has one, and any other children he might have.

In other words, a revelation like that refracts across a lot of people, each with their own perspective. They can require a lot of time and difficult conversations to process. It’s really important that we get this moment right, and I’m hoping one thing my book and other coverage of this topic can do is spark a broader cultural conversation about how to help people navigate these journeys of discovery and reconciliation.

I keep thinking about how, for so long — for all of human history! — secrets belonged to the secret-keepers. Now, they don’t. Now, for $99, your own spit is enough to tell you if there’s a secret in your family, or if there are important things about your own genetic identity that you were never told. This can play out differently for people, and it is never not complicated.

[Editor’s note: Libby Copeland will be in conversation with genealogist and journalist Jennifer Mendelsohn on Thurs., March 5, at 7 p.m., at the Ivy Bookshop in Baltimore, and with Washington Post editor Amy Argetsinger at East City Bookshop in DC on Fri., March 6, at 6:30 p.m.]

Cathy Alter is a member of the Independent’s board of directors and author of CRUSH: Writers Reflect on Love, Longing, and the Power of Their First Celebrity Crush.