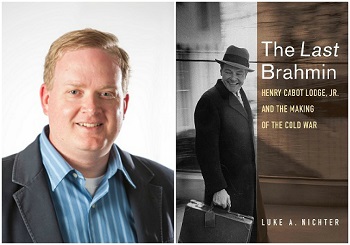 Dr. Luke A. Nichter is a professor of history and the Beck Family Senior Fellow at Texas A&M University-Central Texas and a National Endowment for the Humanities Fellow for 2020-2021. His areas of specialty include the Cold War, the modern presidency, and U.S. political and diplomatic history, with a focus on the “long 1960s” from John F. Kennedy through Watergate.

A noted expert on Richard Nixon's 3,432 hours of secret White House tapes, Nichter is also a New York Times bestselling author or editor of seven books, including, most recently, The Last Brahmin: Henry Cabot Lodge, Jr. and the Making of the Cold War. It is the first full biography of Lodge, whose public-service career spanned the 1930s through the 1970s.

What drew you to write about Lodge?

All my books have led to the next. Working on the Nixon tapes showed me all these people who were on the tapes that I didn’t know about, and Lodge was one of them. He’s this figure that shows up on the Kennedy tapes, on the Johnson tapes; there’s no other figure that’s consistent like that. One day, my editor called and said, “What do you know about Henry Cabot Lodge?” And I said, “That’s a name that I should know more about, but I can’t really place it.” There were no big books on him already out there, and my editor said, “Do you want to propose a book on him?”

What was your approach to Lodge?

The advantage I had here was the passage of time. I think it’s true that journalists write the first draft of history; they must make those necessary instant judgments and analyses of things we’re seeing right now. Then, five years, 10 years from now, the social scientists come around, then the political scientists, the sociologists, the economists. Then, unfortunately, for better or for worse, it’s the historians that do the mopping-up job. I can now give a more dispassionate account of the time period through the eyes of someone of principle [like Lodge]. Ultimately, this is really a book about someone who is familiar to people, but they don’t know why…This is an attempt to sort of reinsert someone into history who was always there in the first place…He’s like a “Where’s Waldo” figure in history: Here’s an event and, well, of course, Lodge is there.

The secretly recorded conversation between President Kennedy and Lodge in 1963 regarding South Vietnamese leader Ngo Dihn Diem is one of the big reveals of the book. Can you tell us more about it?

I discovered this tape in the fall of 2016. As far as I can tell, I’m the first person to use it. Most people would try to plant their flag immediately to claim the information. I was the opposite: I was terrified because I felt a burden to interpret this properly — this takes a lot of time. I’ve worked on enough presidential tapes to know they need to be interpreted, corroborated; it begins a whole process to verify what you think you have. I really felt a burden to get it right — not to make a crass political statement, not to overemphasize Kennedy’s role and what he might have known but also not to underestimate what he might have done and said.

Did Lodge keep a personal diary?

Lodge wrote a lot of personal reflections, self-analysis, later — little “breadcrumbs” to tell later historians perhaps what he really thought without “telling all.” I would find these little hidden notes in his files where he would kind of tell you how things really happened. He leaves these scattered. I maybe saw more than 100 of these throughout his files. He writes notes extensively on Vietnam, but other parts of his career he’s mostly silent on. You have to take the breadcrumbs with a grain of salt since they were there to tell his side of the story. Ultimately, this is his way of telling his side without writing a tell-all memoir that he was so conditioned by his class not to write, though he was pursued for this book by many editors.

Tell us about Kennedy’s appointment of Lodge as his “personal ambassador” to Vietnam.

Kennedy asked Lodge to be his “permanent fact finder” and “personal ambassador.” This was not just a diplomatic-service appointment. Lodge was no ordinary ambassador. He was there to get a hold of the public messaging coming out of Saigon. He could tell [Kennedy] what the situation was on the ground. The very act of sending Lodge himself to Vietnam was a policy change. He was someone who could directly plug in and who knew the CIA intimately from his eight years under Eisenhower. Kennedy wasn’t just sending over a member of the opposition who could be blamed if things went wrong, which is how it’s been written up in virtually every account. It’s much more than that. Lodge really was the perfect fit for the job, even if you can say the result was catastrophic.

Lodge was very progressive on civil rights for his time. What created this attitude?

He came from a family of “Lincoln Republicans”: a slice of [whom] were strict abolitionists. He inherits that sense. Secondly, Lodge’s experiences in the U.S. Army and the U.N. exposed him to other classes and cultures, and this helped to make him more egalitarian. Lodge didn’t come in as some high-flying Army officer with a desk job. He joined the infantry in the artillery division. He asked for difficult assignments as an Army reservist, not a career officer, and was genuinely in harm’s way many, many times during World War II.

Getting to the peak of the book with civil rights, I talk about the 1960 election. The Nixon-Lodge ticket makes the boldest, most progressive statement about civil rights than any campaign up to that time, and for quite a few years after that time. The [Nixon-Lodge team] had a consistently strong civil rights record, Lodge making the first call of any major-party nominee to not just have a token Black in a cabinet, but to appoint African Americans to high-ranking foreign-service positions, including ambassadors in countries where that was not popular.

Lodge was this kind of James Bond Cold War figure — with a pistol in his pants, hand-wringing dictators by day and eating at some elegant bistro in the evening. Even the photo from the front of the book, which I chose, shows this idea. I was going for this nexus between Brooks Brothers mannequin and a man of action, a man in motion who was never in one place for very long. “Handsome. Elegant. Well-spoken.” These words were all used about Lodge, but we don’t know him because he was overtaken by Camelot. I don’t like to use the word “unique” a lot, but if it were to be used for a person, it could be used for Lodge.

I think, to a degree, all biographers fall in love with their subjects…In this day and age, when all of us are longing for something different in politics…I think Lodge [harks] back to a time that might be gone forever, but there’s just a bit of nostalgia about these figures. Lodge was an enigma. He’s still kind of fuzzy in parts, and I think that’s how he wanted to leave it. He would wag his finger when he said, “Never tell them how you did it!” There is also a tinge of arrogance there, but it’s really just self-confidence. Lodge wants to leave it a little fuzzy.

Like the White House tapes of Kennedy, Johnson, and Nixon led me to learn more about Henry Cabot Lodge Jr., working on the Lodge biography showed me that despite the number of works on the 1968 presidential election — the most important in modern U.S. history — there really isn’t a rigorously researched historical account. I signed a contract with Yale University Press earlier this year to write one, which has cooperation from all four major sides: Lyndon Johnson, Hubert Humphrey, Richard Nixon, and George Wallace. I’ve interviewed around 75 people, in addition to finding a lot of new things in the archives that will change our understanding of [that] historic year. Luckily, I got most of the research done prior to the pandemic, so I hope to bring it out in 2022.