The writer talks DC, eavesdropping, and those strange types who wear their work badges after hours. 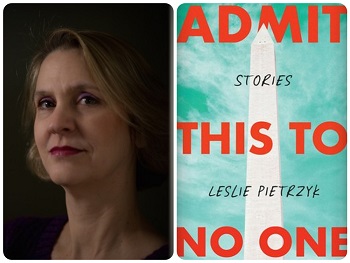 If you want to write about power — and the resulting dynamics across a variety of relationships — author Leslie Pietrzyk says DC is open territory. In fact, the title of her newest collection of short stories, Admit This to No One, shaped her thinking: What are people in DC afraid of? What makes them squirm? What are the secret thoughts they would never admit, not to anyone? What deep shames do we carry with us every day?

With her trademark scalpel wit in hand, Pietrzyk explores these questions in a DC universe where an unnamed speaker of the house is the book's sun around which all other characters — an unwanted daughter, a past mistress, and a landscape that includes a parking garage in Rosslyn, the view of DC from Anacostia, and the inner sanctum of the Executive Office — revolve. Searing, hilarious, and unflinching, Pietrzyk's characters are sad and selfish and, most likely, people we've met (at least once) before in our nation's capital.

How long have you lived in DC, and what took you so long to send it up with this spot-on collection?

I lived in the DC area — mostly Alexandria — for nearly 30 years, which I can hardly believe. I’ve written short pieces set in the area but never a whole book, and I rarely (never?) until now wrote about political DC life. I initially turned to this subject matter to defiantly not write about my own life, creating a tangled political family instead; I’d recently finished [writing] two books with personal connections that were emotionally wrenching, and I wanted a break. I relished the challenge of writing about politics in a way that wouldn’t fall into the usual stereotypes and expectations. A lot goes on in this town that outside people don’t see and/or understand, and “official DC” is its own culture with its own unwritten rules. Like, back in the early days after I came here from the Midwest, I noticed people on the Metro wearing their work badges after work — which puzzled me until I realized they wanted people like me to know exactly where they worked and exactly how important they were. I was so jealous not to have a badge at my job!

Is your recent move to North Carolina in advance of the book’s release just a coincidence? Did any Washington insiders suggest you run and hide?

There’s something sketchy about writing a scathing book about a city and then skipping town! Often, I write about places I’ve left, so it wouldn’t surprise me if I were to take up with some of these characters again. Mary-Grace, the speaker’s all-knowing assistant, holder of all the secrets, surely has more to say.

These stories read like nonfiction. Were you ever an intern? Or did you put out an anonymous call for some Beltway dirt?

Early in my youth, I worked a crap job for a grassroots political group that employed an interesting mix of ambitious and brainy analysts and politicos and, well, some personality types remain a constant in DC life. Living here as long as I did, it’s inevitable to cross paths with people who keep official DC running: journalists, interns, staffers, lobbyists, bureaucrats, lawyers. My job as a writer is to pay attention, especially to small details that may feel insignificant — typically that’s where the stories are. I’m always happy to ask questions about people’s jobs, and luckily, people in DC are happy to talk (and talk) about what they do and who they know and what they think. I’ll also credit 30 years of reading the paper edition of the Washington Post and Washingtonian magazine, and too many sleepless nights with C-SPAN radio murmuring in my earbuds. (OMG, how DC is that?!)

Along those lines, did you hang out at places like Old Ebbitt Grill and eavesdrop? The opening story’s scene at the Kennedy Center was like watching a documentary!

I wanted to include scenes and/or stories at places that people who live here would recognize, but I hoped to render them in such a way as to show them anew to a jaded Washingtonian. The Kennedy Center is probably my favorite place in the city, and for a while, I was there often, stopping for a drink and appetizer pre-performance in that little nook across from the bar upstairs. I was personally devastated when they repurposed that area — so it’s nice that, in my mind, that space and time in my life continue to exist on the page. I eavesdrop wherever I go, so I heard and observed things on the Metro, on the Mall, at tedious receptions, at the fancy power-people parties I landed at (I really want to name-drop here, but I’ll resist, though I’ll note that one such party featured a caviar bar). A writer can’t help but pick up on things.

The structure of your book is brilliant, with characters and POVs reappearing and overlapping. Did you play around with it or always know how the stories would “speak” to each other?

Initially, I thought I was going to write a novel only about the (imagined) speaker of the house and his family, who are at the center of this book, but after Trump won the election, I soured on the idea of immersing myself in fictional politics when real-life politics was too painful. I abandoned that novel, mining it for parts and creating several short stories that I published. Right before the pandemic, I showed my editor some of these stories, along with others about race and various power structures. She had the grand idea that the stories could be linked and converse with one another, and I was intrigued. Then, lockdown — and the pandemic isolation that was horrible in real life was good for my creative life. I flung myself into revising and creating new stories that could form a larger arc. I scoured the failed novel and resurrected characters, fleshed out others. I revised some of my earlier stories and returned to some half-finished pieces, all the while thinking about power and secrets.

An Interview with Sir Noel Malcolm

The noted — and knighted — author discusses power and triumph in 1500s Europe.

An Interview with Rebecca Fleet

The writer talks early inspiration, marital strife, and the inherent weirdness of Airbnb.