An Interview with Kris O’Shee

The therapist/choreographer celebrates her late husband, Alan Cheuse, in a new memoir. 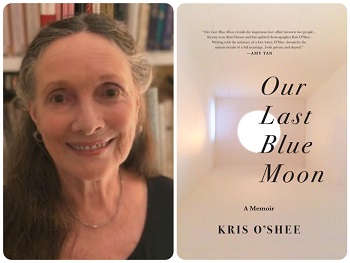 Many readers will remember Alan Cheuse, the golden-voiced, longtime book critic for National Public Radio. Cheuse, who was also a novelist, teacher, and mentor to countless writers, died in August 2015 from injuries sustained in a car accident. When he did, his widow, psychotherapist and former dancer and choreographer Kris O’Shee, had to find a way to assuage her own deep grief. The result is Our Last Blue Moon. It’s both a love story and a moving tribute to Cheuse’s life.

The book starts with a phone call you received from Alan while you were in Washington, DC. He called you from the side of the road in California immediately after the car accident. What happened?

Alan was driving to Santa Cruz from Squaw Valley Writers Workshop in Nevada City, where he taught every summer. He was tired, and I wanted him to break up the trip. But Alan was eager to get to Santa Cruz, where he’d spent time each summer, to rework his new novel. While driving, he closed his eyes for a moment, and his car crossed the center line, hitting another car.

You then flew out to be with Alan. You were in his hospital room when the doctor told Alan that he was a healthy man, his bones would heal, his CT scans were clear, and that the doctor didn’t see any other medical issues. So, what went wrong?

We just thought he had some broken bones; we thought he would be okay. I was talking and laughing with Alan one night, then the next night, he was in a coma. It was all very hard to fathom. The doctors had performed emergency brain surgery due to a previously undetected brain bleed caused by the accident.

The book’s structure flows back and forth in time, from when you first met Alan over 25 years ago at Djerassi Resident Artists Program in Woodside, California, up to his final moments. Did the book change over time?

The book’s basic structure — the first two weeks and the last two weeks that Alan and I were together — remained the same. Along the way, I started adding things to the book to give a broader picture of our life together.

What were your first two weeks like with Alan at Djerassi?

Being at an artists’ retreat, well, we were not in the real world. I was working on choreographing a Hopi dance, and Alan was working on a novel. The atmosphere was potent for love and lust. We had a powerful attraction; our souls were identical.

Did you set out to write a memoir?

I started out keeping a journal to get the grief out. What I really wanted to do was bring Alan back to life, to remember how powerful our early days were, and to honor him as a writer. I never would’ve written the book if there hadn’t been a great love between us.

You were a choreographer and dancer for 40 years. What similarities did you find between those skills and writing?

As a choreographer, there is a structure, a pace, and a dynamic movement that you build upon to create a dance. You need variety and contrast, the same things that I thought about when writing and structuring the book.

You wrote the book in Alan’s office, sitting in his chair. Was that intimidating or inspiring?

I felt close to him, not intimidated. I’d invite him to sit with me while I wrote. In my mind, I heard him say things like, “What does it smell like? What does it look like to see a star shoot across the sky?” These had been his instructions when he’d given me a couple of writing assignments in the past.

Were there any special challenges to writing a memoir?

It was challenging to remain sensitive and aware of the entire family. You have to think about the effect of your words on the people you’re writing about and base some of your writing decisions on that.

In the chapter titled “Highway 17,” you deviate from writing from your point of view to Alan’s. Was that difficult?

I actually had fun with that because I got to make things up. I enjoyed being in Alan’s head, and I wanted us all to be in his body as he drove his car on 17. It’s a very twisty and hazardous road.

One of the most poignant scenes in the book is your last night with Alan. A full “blue moon” was shining through the window and onto him. You got out of your chair and performed a dance. Can you tell us about that?

That final dance was a sendoff. The full moon was shining on his bed, calling out for a dance of life and death. I wanted to stir up the energy a bit. To dance him into the stars, to use my energy to try and propel him into the next realm that he was going to.

Therese Droste is a Washington, DC-based writer and member of the Independent’s board of directors. Her work has appeared in the Washington Post, Prevention, Health, and numerous other publications.

An Interview with Emily Schultz

The author discusses relationships, mother-daughter conflicts, and the relative merits of zombies.